Trump raged over a Fox News segment about Sonia Sotomayor, but did not appear to understand what she said 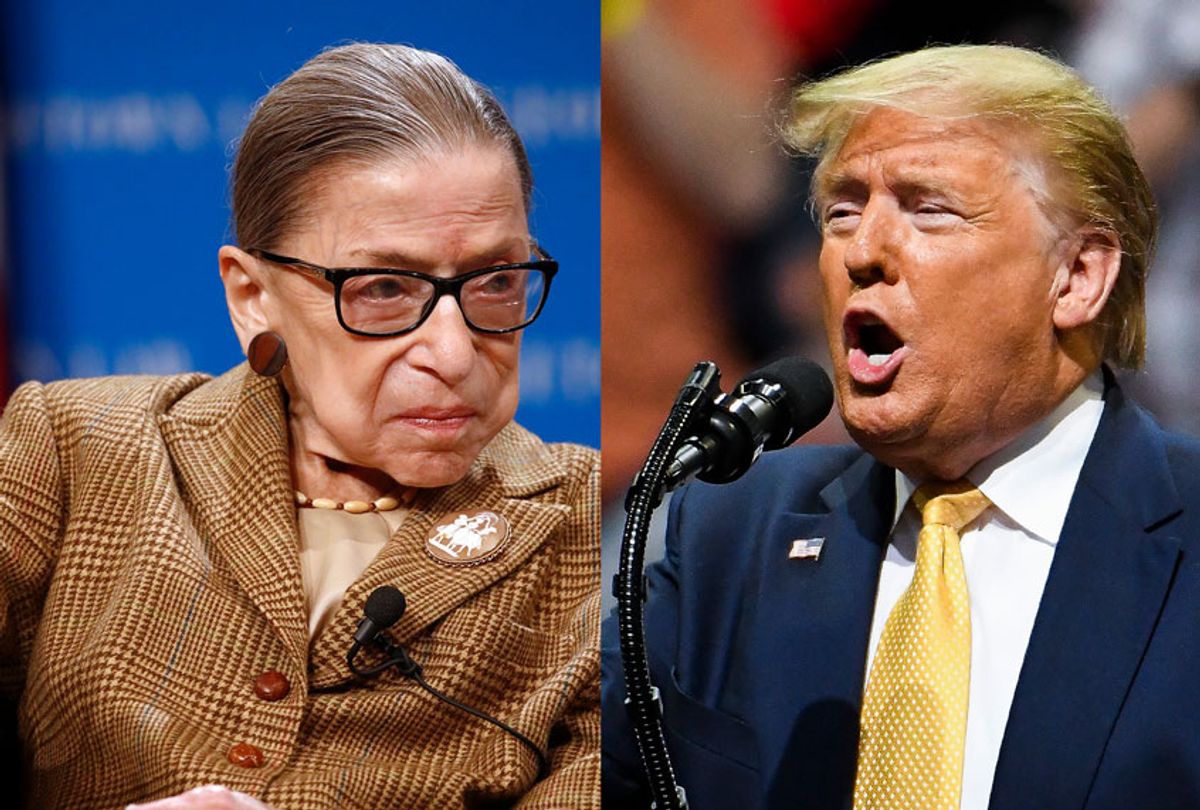 President Donald Trump demanded that two of the Supreme Court's liberal justices "recuse" themselves from issues related to him, arguing that they are "biased."

Trump responded to a Fox News segment about Justice Sonia Sotomayor accusing conservative justices of "being biased in favor of Trump" by insisting that Sotomayor and fellow Justice Ruth Bader Ginsburg were the "biased" ones.

"This is a terrible thing to say. Trying to 'shame' some into voting her way?" Trump tweeted. "She never criticized Justice Ginsberg [sic] when she called me a 'faker'. Both should recuse themselves on all Trump, or Trump related, matters!"

"While 'elections have consequences', I only ask for fairness, especially when it comes to decisions made by the United States Supreme Court!" he added.

Trump also complained about Sotomayor's statement during a news conference in India on Tuesday.

"I just don't know how they cannot recuse themselves for anything Trump or Trump-related," he complained.

Trump "did not seem familiar" with what Sotomayor wrote and "instead seemed to be reacting to a headline," The New York Times noted. Asked by a reporter to identify what he found inappropriate about the statement, Trump responded, "You know what the statement was."

When a reporter summarized what Sotomayor wrote, Trump replied, "No, I don't think that was it."

The president's tweet made clear that his comments were in response to a segment he apparently saw on Laura Ingraham's Fox News show.

Trump's outburst came after Sotomayor issued a dissenting opinion last week as the conservative majority voted to allow the administration to deny green cards to immigrants whom the government deems likely to become "public charges," meaning they may rely on safety net programs.

Sotomayor wrote that the Trump administration immediately runs to the Supreme Court when lower courts don't rule their way.

"Claiming one emergency after another, the government has recently sought stays in an unprecedented number of cases, demanding immediate attention and consuming limited court resources in each," she wrote. "And with each successive application, of course, its cries of urgency ring increasingly hollow."

Sotomayor did not explicitly say that conservative justices are biased. Rather, she argued that the court "is partly to blame for the breakdown in the appellate process," because it "has been all too quick to grant the government's" requests.

"Perhaps most troublingly, the court's recent behavior on stay applications has benefited one litigant over all others," she said, referring to the Trump administration.

Ginsburg had nothing to do with the opinion but Trump appeared to be revisiting a four-year-old feud that began when the beloved liberal justice criticized then-candidate Trump and called him a "faker" during the 2016 presidential campaign. Trump demanded that Ginsburg resign and the justice later said her comment was "ill-advised."

With his attacks on investigators fizzling out, Trump has increasingly taken to attacking judges overseeing cases related to him. He repeatedly attacked Judge Amy Berman Jackson, who is overseeing the case of Roger Stone, the president's longtime confidant and political adviser. Trump has also repeatedly complained about the Ninth Circuit Court of Appeals in California, which has frequently ruled against his administration. Trump infamously declared during his campaign that Gonzalo Curiel, a federal district court judge overseeing the Trump University fraud case, could not be impartial because he was "Mexican." Curiel was born in Indiana.

Trump has largely stayed away from attacking the Supreme Court, which has repeatedly sided with his administration on controversial issues. But Trump's attacks on an "Obama judge" who ruled against his administration's asylum policy earned a rebuke from Chief Justice John Roberts.

"We do not have Obama judges or Trump judges, Bush judges or Clinton judges," he said in a statement. "What we have is an extraordinary group of dedicated judges doing their level best to do equal right to those appearing before them. That independent judiciary is something we should all be thankful for."

Trump's call for the liberal justices to recuse themselves came on the same day as Take Back the Court, a group that fights Trump's judicial nominations, called on Justice Clarence Thomas to recuse himself from Trump-related cases. The statement came in response to a report that Ginni Thomas, the justice's wife, had worked to compile lists of government officials deemed "disloyal" to Trump to purge from the administration.

"It is clearly inappropriate and unethical for you to rule in any case directly involving President Trump," the group said. "Just last week, your colleague, Justice Sotomayor, issued a remarkable warning that you and your fellow conservatives on the court are inappropriately favoring the Trump administration. Public confidence in the legitimacy of the court is in peril."