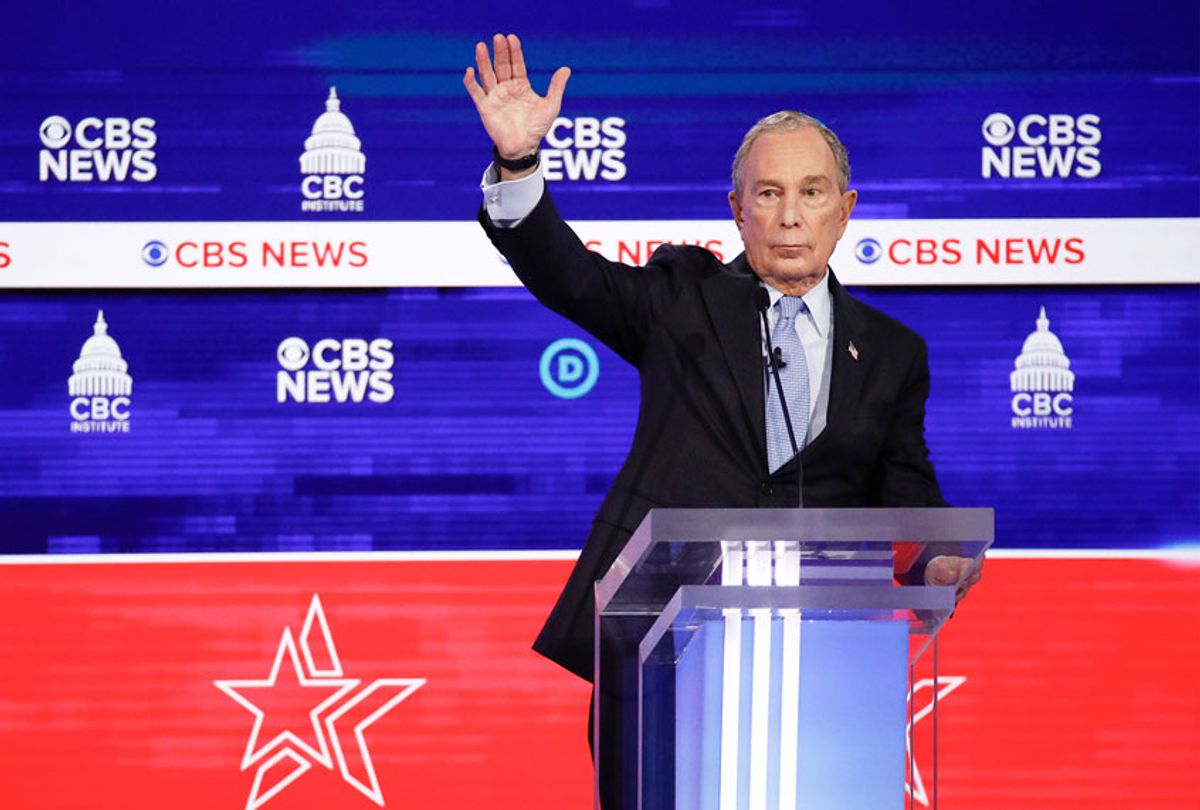 The billionaire former Republican attempted to hit back at criticism from Sen. Elizabeth Warren, D-Mass., over his large contributions to Republicans like Sen. Lindsey Graham of South Carolina by touting his Democratic bona fides.

"Let's just go on the record. They talk about 40 Democrats. Twenty-one of those are people that I spent a hundred million dollars to help elect," Bloomberg said. "All of the new Democrats that came in and put Nancy Pelosi in charge and gave the Congress the ability to control this president, I bough — I, I got them."

The comment from Bloomberg, who has argued that he is best suited to defeat President Trump, quickly provided fodder for Republicans like Donald Trump Jr., who seized on him "admitting he bought those seats."

Bloomberg's gaffe came after Warren called him out over a $250,000 contribution he gave to a Graham-allied super PAC in 2014. Warren noted that Bloomberg also helped fund former Republican Sen. Scott Brown, who now serves as President Donald Trump's ambassador to New Zealand, in the Massachusetts Senate race when she defeated him.

"He scooped in and to tried to defend another Republican senator against a woman challenger," she said. "That was me. It didn't work."

Bloomberg said that he had supported Brown and Toomey because they were Republicans who crossed party lines to support gun legislation. The super PAC he funded said it supported Graham because of his support for Israel.

Though Bloomberg registered as a Democrat in 2018 and vowed to spend millions to help Democrats, The Washington Post noted that the "transnational" billionaire was also one of the biggest donors to the New York Republican caucus.

"I don't care how much money Mayor Bloomberg has," Warren said Tuesday, "the core of the Democratic Party will never trust him."

Bloomberg, who has spent more than $500 million to blanket television airwaves and social media with ads, has argued that his wealth gives him an advantage against Trump. He's vowed to continue spending millions to defeat Trump even if he doesn't win the nomination, though frontrunner Sen. Bernie Sanders' campaign categorically rejected his financial support on Tuesday.

Though Sanders cannot control outside groups' spending, Bloomberg's team said it would not provide support to a candidate who did not want it.

"Bernie said he didn't want [Bloomberg's] money, so we're not going to. I don't think it would be prudent to spend on behalf of somebody who didn't want it," senior Bloomberg adviser Howard Wolfson told NBC. "I think everyone else has said they want the help, including Elizabeth Warren. If Elizabeth Warren is the nominee, we will do everything we can to help her. Sanders is the one candidate who said he didn't want the help."

Bloomberg's spending has become a focal point in the Democratic race. Many observers questioned why he was allowed to buy campaign ads during the debate itself.

"What kind of rule allows the candidates to advertise *during* the debate? Or did Bloomberg just buy CBS?" asked New Yorker writer Tad Friend.

"Am I the only one offended by the Mike Bloomberg ad that just aired during the break?" wrote former Labor Secretary Robert Reich. "Big money is destroying American democracy."

Some viewers also questioned why Bloomberg seemed to be so popular among the debate audience. The Bloomberg campaign denied rumors that it bought up tickets for supporters, calling them "categorically false."

Many seized on a WCSC-TV report that quoted the Charleston County Democratic Party website saying "the only guaranteed way" to get into the debate was to buy a state party sponsorship for $1,750 to $3,200.

But the party removed its sponsorship link and said it did not have "any tickets to distribute" 24 hours after the initial report was published, weeks before the debate. The party told WCSC that it distributed the tickets among party insiders at "no cost" and also provided tickets to donors.

"Party officials explained tickets are handed out to organizers like the Democratic National Committee, CBS, Twitter and the Black Caucus Institute," WCSC reported. "Then, they are first given to paid sponsors and handed to campaigns to pass out extras."

"How those remaining tickets ended up getting doled out is anyone's guess," wrote Slate's Ashley Feinberg, "but the one thing we do know for certain is that a vocal contingent of the audience really liked Bloomberg."