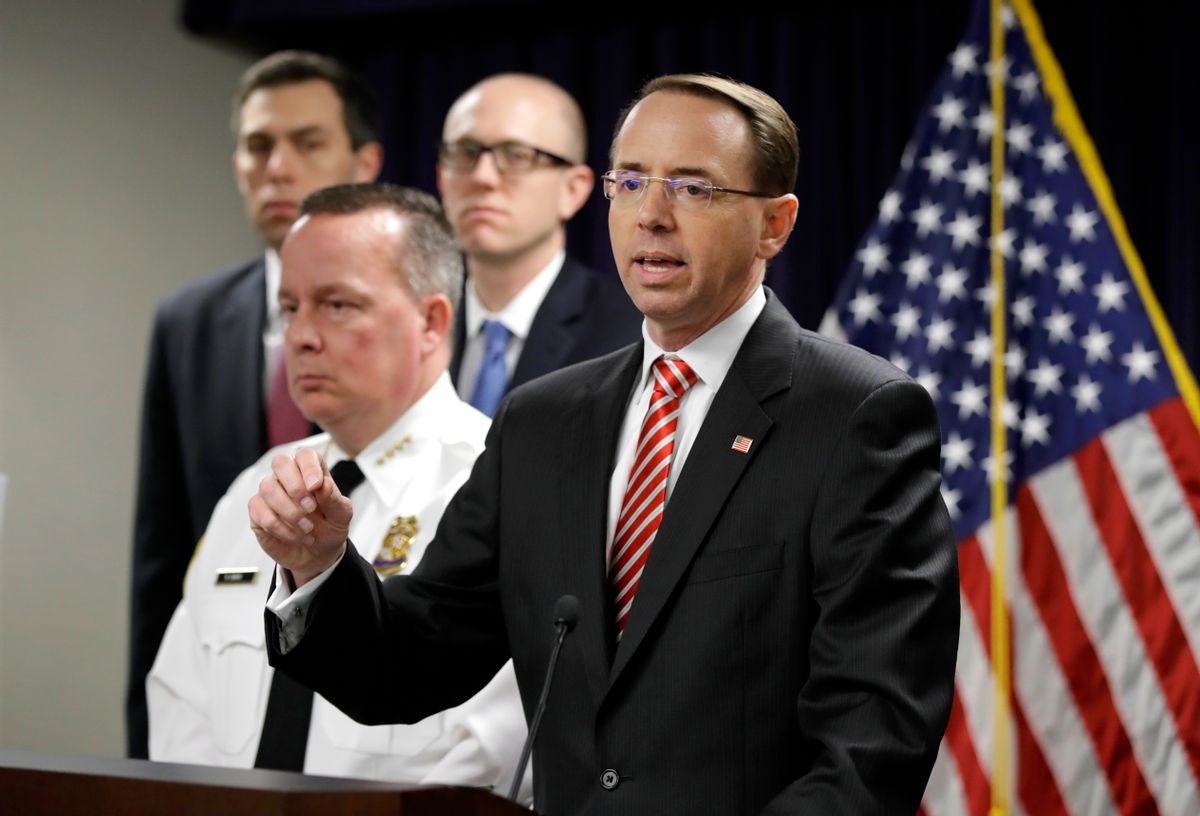 Conservatives have spread a baseless coronavirus conspiracy theory alleging that a top official at the Centers for Disease Control could be part of a "deep state" plot to "bring down" President Donald Trump, because her brother is former Deputy Attorney General Rod Rosenstein.

Trump was reportedly "furious" after Dr. Nancy Messonnier, the director of the National Center for Immunization and Respiratory Diseases, undercut his attempts to downplay the risk posed by the coronavirus by issuing a public warning that an outbreak in the U.S. now appears inevitable.

"She never should have said that," a senior administration official told CNBC. "It's bad."

Messonnier is the sister of Rosenstein, who appointed former special counsel Bob Mueller and reportedly discussed removing Trump from office, a claim which he has denied.

Limbaugh, who was awarded the Presidential Medal of Freedom earlier this month, previously claimed that the coronavirus, which has spread to dozens of countries and killed more than 2,800 people, is nothing more than a "common cold" that is being "weaponized" to "bring down" Trump.

Limbaugh went a step further Tuesday, licking Messonnier to the conspiracy theory because her brother is Rosenstein.

"So you've got here the CDC urging Americans to prepare for a coronavirus virus outbreak. 'This might be bad, could be bad. Keep your kids at home. Don't go anywhere. It might be bad. We've got 53 cases. It might be bad. It could be.' The stock market's plunging. OK. This person running this agency, who does she donate to? Well, her brother is Rod Rosenstein," Limbaugh said.

After a commercial break, Limbaugh insisted that he was just putting the information out there and listeners could "do what you want with it."

"It may mean nothing. Might . . . Who knows?" he said. "It's just in that town — I'm telling you, everything is incestuous. Most of that town is establishment oriented or rooted, which means they despise Trump."

"The brother of the CDC's Dr. Nancy Messonnier, is the corrupt disgraced former DAG Rod Rosenstein," wrote Jim Hoft, editor of the far-right Gateway Pundit. "Following in his footsteps, Dr. Messonnier dropped a bomb on President Trump while he was in India yesterday . . . This was eerily similar to past presidential trips when former and corrupt DAG Rod Rosenstein and the corrupt and criminal Mueller gang would drop shocking news as the president was overseas."

"Rod Rosenstein, as we all know, definitely worked to undermine the Trump administration, which is oddly exactly what his sister is doing by undermining the more logical and calm message the president's team has issued on the virus," he wrote. "Looks like this is yet another instance of D.C. swamp creatures using any opportunity to undermine President Trump."

All of the conspiracy theories appeared to be based on the fact that Messonnier's warning was much starker than comments by Trump and administration officials. But Trump and his team went to comical lengths to downplay the risk posed by the virus, which has infected more than 82,000 people. Trump and administration officials similarly went out of their way to hit out at criticism of the president's handling of the outbreak.

"Several of the officials who spoke . . . seemed less concerned about containing the spread of coronavirus than with halting the propagation of criticism of Trump and the administration," wrote The Washington Post's Philip Bump.

Messonnier's warning was in line with those of health officials around the world, some of whom criticized the Trump administration's attempts to downplay the risk of the virus to reduce political fallout.

"He just revealed how ignorant he is about the situation," Dr. Ezekiel Emanuel, a special adviser to the World Health Organization who previously worked in the Obama administration, told MSNBC. "I found most of what he said incoherent . . . There's no evidence that the president or people around him that have been planning this have been taking this seriously."

Even Republicans pushed back Wednesday on the conspiracy theories.

"I've heard people jumping on Nancy Messonnier, because she told us the truth: that it's not a matter of if — but when," Rep. Tom Cole, R-Okla., told Politico. "Isn't that what you want to hear instead of some pie in the sky?"

But Trump said he agreed with Limbaugh that the outbreak is being weaponized to hurt him politically at Wednesday's news conference.

"Have you seen evidence that the CDC is trying to hurt you?" a reporter asked.

"No, I don't think the CDC is at all," Trump replied. "They've been working very well."

Trump attempted to calm market fears over the coronavirus after the Dow Jones plummeted by nearly 1,900 points in just two days.

The administration's widely-criticized response has become a focal point on the presidential campaign trail.

Sen. Bernie Sanders, I-Vt., slammed the administration for what he called an "inadequate and incompetent response."

Sen. Elizabeth Warren, D-Mass., vowed to introduce a bill to divert funding for Trump's border wall to the response efforts.

"I'm going to be introducing a plan to take every dime that the president is now spending on his racist wall at our Southern border and divert it to work on the coronavirus," she said.

"The American people need a well-coordinated, whole-of-government, fully-funded response to keep them safe from the coronavirus threat. Unfortunately, the Trump administration has mounted an opaque and chaotic response to this outbreak," House Speaker Nancy Pelosi, D-Calif., said, adding that Trump's recent budget  proposal "called for slashing almost $700 million from the Centers for Disease Control."

"The administration," she said, "continues to devalue Americans' health security by ransacking funding from other vital public health needs."