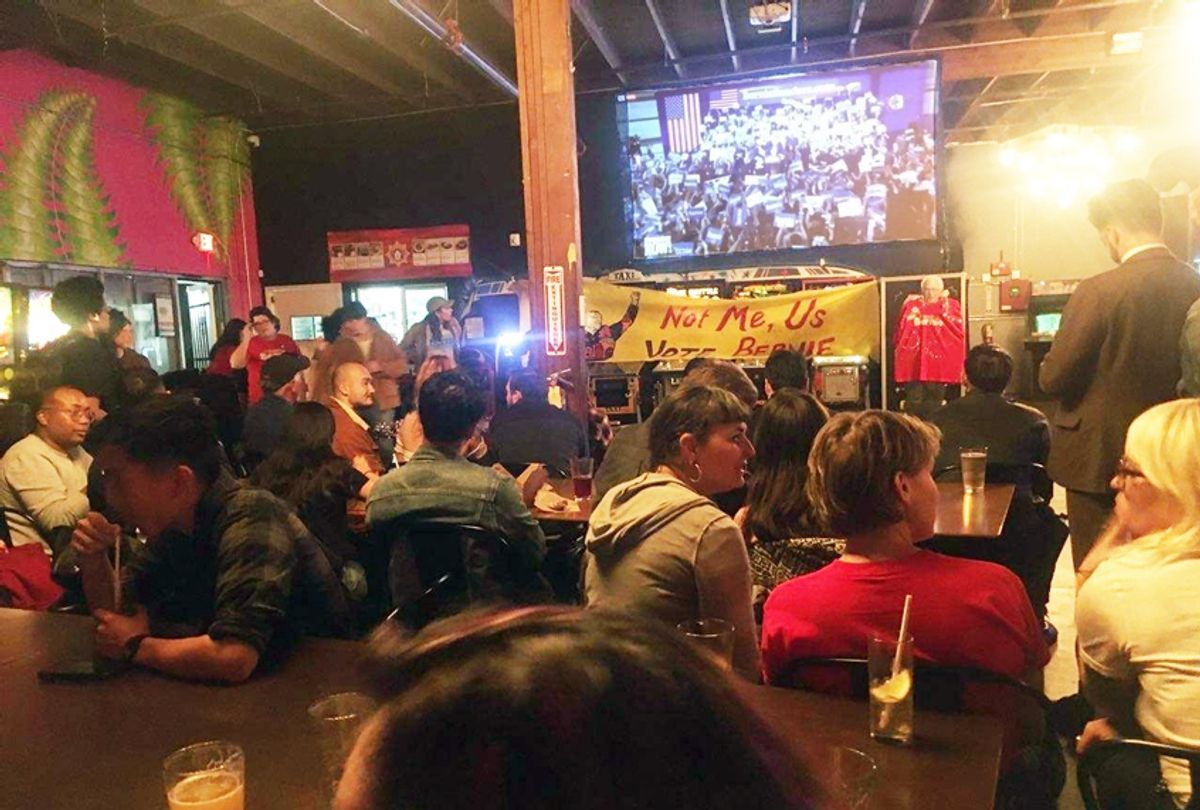 Members of the East Bay chapter of the Democratic Socialists of America gather at a bar in West Oakland to watch the results of the primaries on Super Tuesday, March 3, 2020. Sen. Sanders was triumphant in the California primary. (Salon/Nicole Karlis)
--

OAKLAND, Calif. — Right as the night was about to begin, it ended. An hour into a watch party at a dive-bar-meets-arcade in West Oakland, hosted by the East Bay chapter of the Democratic Socialists of America (DSA), the event pivoted into an unexpectedly early celebration when Sen. Bernie Sanders (I-Vt.) won the California primary.

The party, which was meant to be an event for DSA members to watch the results roll in, started at 7 p.m. Pacific Standard Time, and was scheduled to go until midnight. Earlier reports suggested that the California primary could take days, or even weeks to call — in part due to mail-in and provisional ballots.

Yet five minutes after the polls closed in California, it became clear that the mail-ins were sufficient to conclude that Californian overwhelmingly chose Sanders, as reported by AP News.

A DSA member traipsed on stage to share the news, which had yet to circulate fully among the crowd. And speaking of the crowd: the room was packed with over 100 people, many donning creative and handmade Sanders gear; one woman wore a denim jacket with "Not Me, Us" pinned on the back; another had "BERNIE" in rhinestones on his shaved head. Even the bar had Bernie swag: there was a cardboard cutout of Sanders, who looked like he stepped out of Mardi Gras, next to a row of pinball machines that was covered up with a "Not Me, Us," banner.

"I want to quickly get a show of hands — how many people have volunteered for Bernie?" the woman on stage asked.

The crowd cheered, and half of the hands in the room shot up.

"How many people donated money to Bernie?"

A majority raised their hands.

"How many of you have begged, pleaded, convinced family members, coworkers, friends, for Bernie?"

The crowd roared once more.

"Well, I want to tell you that it paid off — California won for Bernie!" she shouted triumphantly.

The loudest cheer yet dissolved into a group chant of "not me, us." The woman next to me pulled out her phone and turned to her friend: "I'm texting my dad and telling him 'it's time to donate.'"

Even though Sanders' victory was predicted by pollsters, the audience was elated to see their hard work pay off. Many had been active volunteers for the campaign.

"I'm not surprised, I've been seeing so much love for Bernie across the multi-racial working class in the Bay Area," Keith Brower Brown, the co-chair of East Bay DSA, told me. "There is such a strong commitment to building a democratic socialist future, and people believe that another future and world is possible and necessary."

Up until recently, polls suggested that Sanders had Super Tuesday in the bag. But outside of California, former Vice President Joe Biden had a good night. Yet the emergent threat in the bumbling former Vice President didn't alarm Sanders' supporters. Sanders remains the most progressive candidate, and the only one who consistently argues for human need rather than corporate greed, as his supporters like to say.

"He is the only candidate that has proven you can get to the highest levels of government without ever selling out, or ever removing yourself from your ideals and what you think is right," Nick Evas, a 29-year-old home developer, told me when asked why he is supporting Sanders. "And he's able to do it without accepting corporate money, without taking Super PAC money, and he's proving that this model and campaign works, you can be held accountable to the voters and not corporate interests."

Other attendees agreed Sen. Sanders still has a real shot at snagging the democratic presidential nomination, even though Biden received endorsements from the candidates who dropped out this week.

"Absolutely he has a real shot, and that's a good thing, but can they [the establishment] stop yet another movement in the United States?" Russell Kilday-Hicks, a 63-year-old retiree, told Salon.

Earlier in the day, some voters at an East Oakland precinct were feeling the Bern, too. While foot traffic at various polling stations were slow in the middle of the day, more voters showed up after work.

One being Yareli Aarela, a 24-year-old who works in the nonprofit sector. At the Brookdale Recreation Center, Aarela expressed support for Sanders.

"I think he has been about this game for a while, and being a person of color, first generation Mexican, I feel represented and I feel seen," Aarela said. "He's asking for basic things that aren't radical at all." Indeed, Sanders has consistently won overwhelmingly with Latino voters.

But not everyone I spoke to at the polls was all-in on Sanders. Carla, a 60-year-old city worker who preferred to keep her last name private, said she cast her vote for Warren, but debated at the last minute. She was torn between Warren and Biden.

"Even though I voted for Sanders in 2016, there's some toxicity now that is just really turning me off," she said. "So I went with Warren because she was the first candidate I liked, but I'm wondering how many delegates she'll get together. I'm really upset because I think almost all of the female candidates who were running were better than any of the men I saw running."

"As a party, it's kind of shameful," she added.

Kurt Durham, a 61-year-old flagger for a construction company, told me he voted for Biden.

"I wish I could have voted for all three, Biden, Bloomberg and Sanders, but I voted for Biden because he's Obama's Vice President, and I wish that he can get Obama as his vice president," Durham said. "I think that the Democrats have to be more positive in their voting, we're vulnerable now as a country with Trump."

Back at the DSA party on Tuesday night, attendees partied late into the night, toasting with a Bernie Sanders–themed cocktail made of tequila, lime juice and Vermont maple syrup. Organizers emphasized that no matter what happens with the election this year, they will keep mobilizing for Sanders' progressive agenda.