Brian Kilmeade pushes back on claim that Fox is on Trump's side: "He's not happy with this network"

Kilmeade points to a recent interview between Trump and Sean Hannity, in which the president criticized Fox News 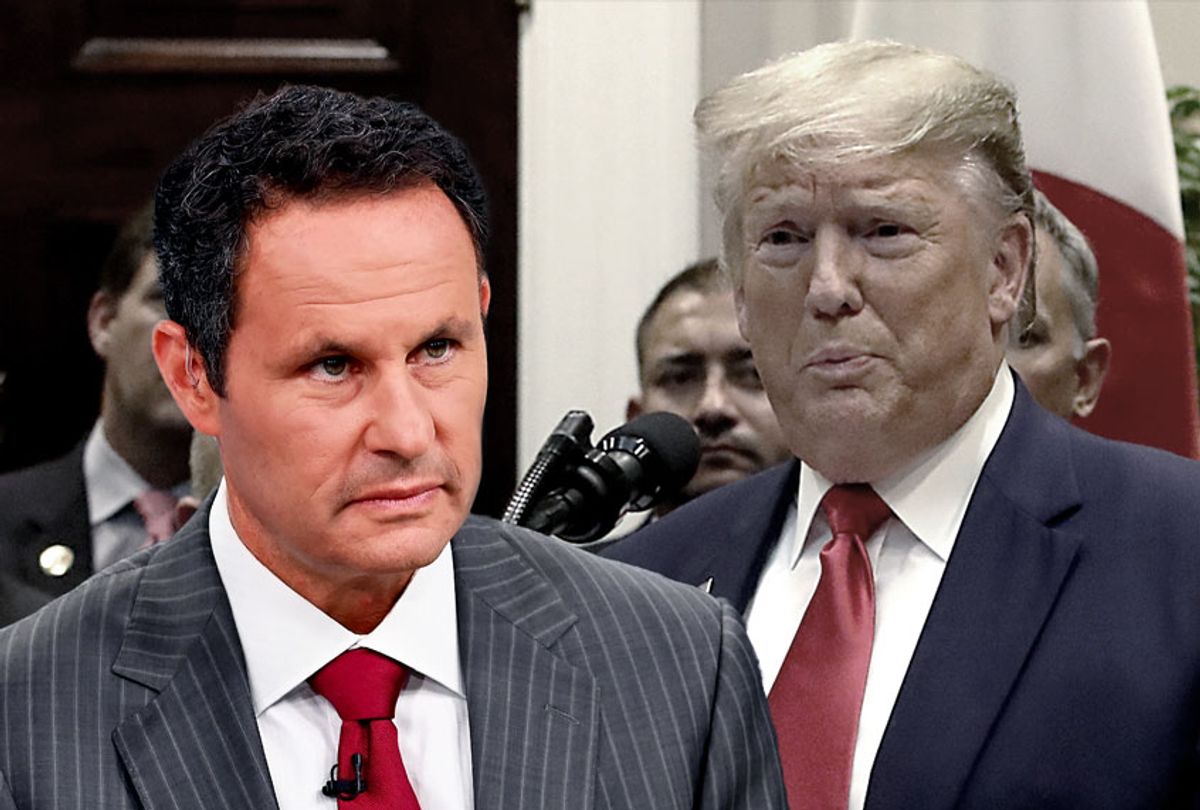 Brian Kilmeade, the co-host of the "Fox & Friends," lashed out at David Plouffe after he claimed on Donald Trump's favorite morning show that the president had Fox News on his side.

"He doesn't have this whole network. Every show here is different," Kilmeade told Plouffe, who managed Obama's 2008 presidential campaign. "And if you talked to him last night — on Sean Hannity — he's not happy with this network."

Plouffe said "Trump's got this network" as he explained the advantages the president has entering the 2020 general election. He doubled down on his observation following Kilmeade's response, describing Fox News as Trump's "happy place" and "his own political Westworld, where he can be the man he wants to be — not the man he is."

Kilmeade shot back, "He knows it's the No. 1 channel in America. We beat every channel — no matter the format. That's what he knows."

Plouffe replied, "This is not a debate, OK? . . . Media outlets should hold the powerful to account — not the account to the powerful."

Kilmeade continued his criticisms on Twitter, referring to a Mediaite headline covering the incident as "totally misleading." However, he did not explain how the headline — "Ex-Obama Adviser Rejects Brian Kilmeade Claim Fox Isn't on Trump's Side: 'This is Not a Debate'" — was inaccurate.

Trump criticized Fox News on Wednesday night, telling host Sean Hannity that "they put people on I think are inappropriate and say very, very false things, and people don't challenge them. I think they're trying to be very politically correct or 'fair and balanced,' right, is the term."

Fox News has pushed back at the idea that they are a pro-Trump network. After the president attacked the cable channel in November for releasing a poll which found that nearly half of Americans wanted him impeached and removed from office, a Fox News spokesperson pointed Salon to an earlier statement saying "our polling unit has long been held in high regard for being a nonpartisan source of research."

When Trump criticized a 2019 Fox News poll that found him trailing in the 2020 presidential election, anchor Bret Baier said that "we have a news side and an opinion side. The opinion folks express their opinions. We do polls. Our latest poll had the Democratic candidates head-to-head, several of them ahead of President Trump. And this poll tracks exactly what the Real Clear Politics average of polls — even a little the other way — and this poll matches what we are seeing out there."

"Say this for Buttigieg. He's willing to be questioned by Chris Wallace, something you've barely done since you've been president," Hume wrote on Twitter.

Kilmeade has criticized the president, as well. He advised Trump to stop tweeting about the impeachment inquiry in November, telling the audience of "Fox & Friends" that "I just think overall the president should just ignore this whole thing. Don't tweet during it. Don't get outraged over it. It ticks you off."

He also expressed dismay in October over Trump's decision to abandon the Kurds by pulling out of Syria, saying that "the reason why our casualties were so low is because the Kurds did all the fighting. Now we're saying, 'OK, Turks, go wipe them out or force them out.' What kind of message is that to the next ally that wants to side with us?"