Bret Baier pushes back at Trump's criticisms of Fox News: "We have a news side and an opinion side" 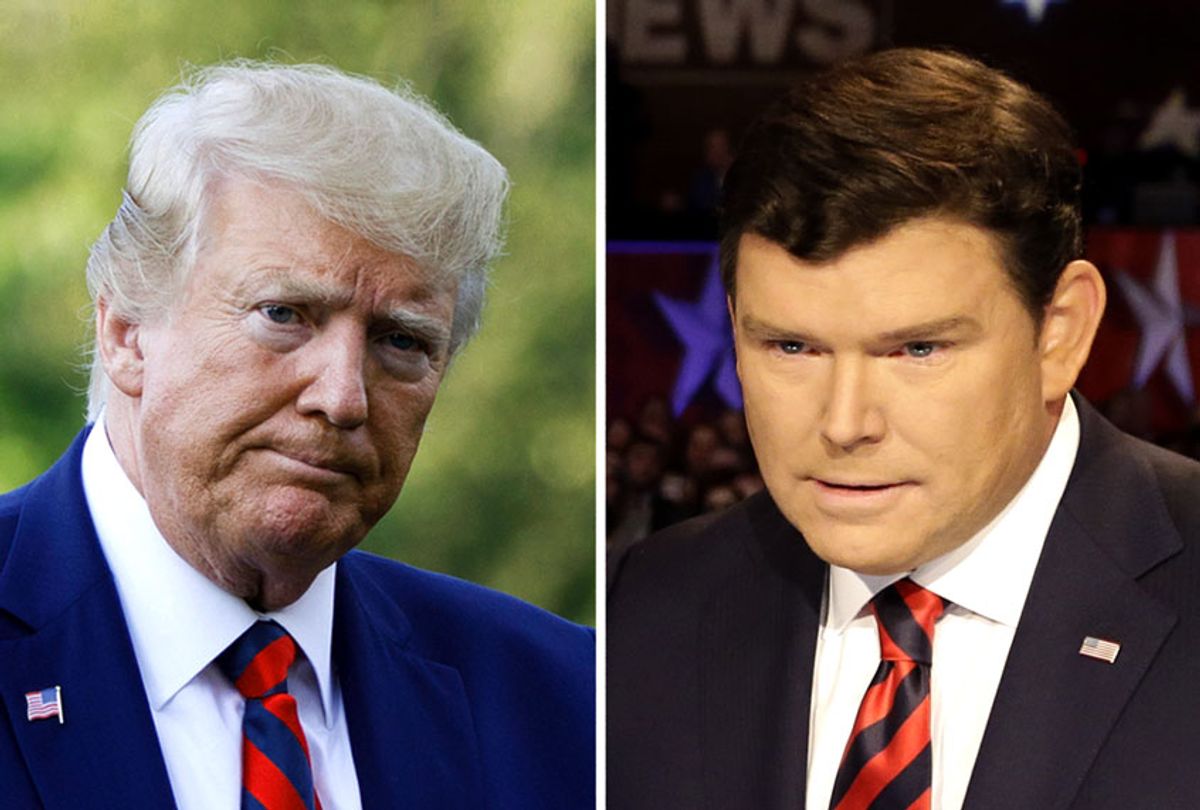 Fox News host Bret Baier called out President Donald Trump for claiming that Fox News had "changed" after the conservative cable network released a poll showing him trailing behind four of the Democratic presidential frontrunners in the 2020 race.

"OK. Well, Fox has not changed," Baier said in response to Trump during a segment from Monday's edition of "Special Report." "We have a news side and an opinion side. The opinion folks express their opinions. We do polls. Our latest poll had the Democratic candidates head-to-head, several of them ahead of President Trump. And this poll tracks exactly what the Real Clear Politics average of polls — even a little the other way — and this poll matches what we are seeing out there."

"Mr. President, we’ve invited you on 'Special Report' many times. We’d love to have you back on," Baier added. "You’ve talked to George Stephanopoulos and Chuck Todd. Come on back. Me, Chris Wallace, the news side cover it fair, balanced and unafraid."

"Fox has changed, and my worst polls have always been from Fox," Trump told the reporters. "There's something going on at Fox — I'll tell you right now, and I'm not happy with it."

"Fox was treated very badly by the Democrats — very, very badly having to do with the Democrats and other things. And I think Fox is making a big mistake," the president added. "Because you know, I'm the one who calls the shots on the really big debates. I guess we're probably planning on three of them. And I'm not happy with Fox."

He later listed Fox personalities with whom he is pleased, remarking that "I'm certainly happy, I think, Sean Hannity, and Lou Dobbs, and I think Tucker Carlson, and Laura [Ingraham], and Jesse Watters and Jeannine [Pirro]. We have a lot of great people."

This is not the first time that Baier has publicly rebuked Trump. After the president criticized Fox News for hosting a town hall with Sanders, the Fox News host responded, "Thanks for watching Mr. President - we’d love to have you on a town hall soon — or even an interview on @SpecialReport —it’s been awhile. We cover all sides."

Speaking to Salon in January, Baier drew a distinction between Fox News' straight news reporting and its opinion section.

"When it comes to the news side of FNC, it’s sometimes tough for some people who don’t watch Fox to realize there is an opinion side and a news side of the house," Baier told Salon. "So when it takes me 592 days to get President Trump to sit for an interview and a little longer for Chris Wallace, some people just paint with a broad brush and lump us all together. The president has appeared frequently on many of our opinion shows."

He later added, "I think every president hates their news coverage. Every one. They don't think they get a fair shake because of one thing or another. This president not only hates the news coverage — and sometimes he's justified — but he not only hates it, he visibly and audibly counterpunches and counterattacks, and it is a challenge. Chris Wallace talks about it really well, I think, in that we are 100 percent against the term 'enemy of the people,' but as Chris describes it and I totally agree with him, we have a responsibility to not go over our skis, to not let emotion or any kind of feelings about that factor in to how we cover him and his administration."