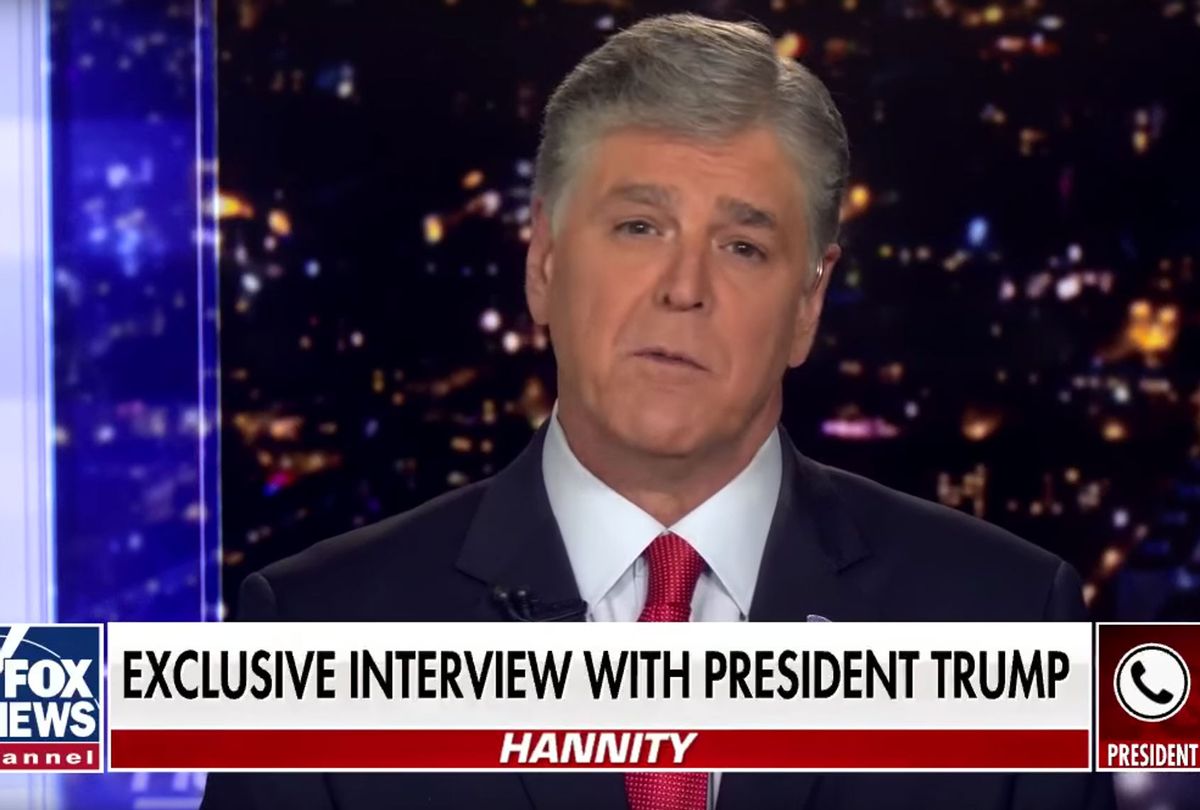 President Donald Trump blasted Fox News while appearing on the right-leaning network, telling its highest-rated host Sean Hannity that the cable channel invites "inappropriate" guests who criticize him in a desire to be "politically correct."

"They put people on I think are inappropriate and say very, very false things, and people don't challenge them. I think they're trying to be very politically correct or 'fair and balanced,' right, is the term," Trump told Hannity during a phone interview.

After Hannity agreed with Trump's opinion, the president added: "I think they hurt themselves, if you want to know the truth."

Earlier in the interview, Trump complained to Hannity that "the media is all on [the Democrats] side" with the exception of "yourself" and other Fox personalities, including Fox News host Mark Levin and Fox Business host Lou Dobbs. Trump also mentioned Rush Limbaugh, a radio host who the president incorrectly identified as working for the Fox networks.

Trump has a history of attacking Fox News after the network invites guests who are critical of the president or releases unfavorable poll numbers about him. During a rally in Colorado last month, Trump criticized Fox News and Fox Business Network host Neil Cavuto, saying "they had this woman on Neil Cavuto who doesn't treat us good" and that Cavuto himself is "not too good."

That comment referred to A. B. Stoddard, a RealClearPolitics associate editor who claimed that Trump performed poorly during the presidential debates in the 2016 cycle. Trump incorrectly claimed in a tweet that he "won every one of my debates," even though respondents in post-debate polls picked Democratic nominee Hillary Clinton as the winner of those contests.

The president also attacked Fox News in November for releasing a poll, which found that nearly half of Americans wanted him impeached and removed from office.

"You're reading the wrong polls. I have the real polls," Trump told reporters outside the White House. "I have the real polls. The CNN polls are fake. The Fox polls have always been lousy. I tell them they ought to get themselves a real pollster. But the real polls — if you look at the polls that came out this morning — people don't want anything to do with impeachment. It's a phony scam. It's a hoax."

A spokesperson from Fox News pointed Salon to an earlier statement by the network saying "our polling unit has long been held in high regard for being a nonpartisan source of research."

Trump criticized Fox personalities Andrew Napolitano, Shepard Smith (who left in October) and others one month earlier after Fox News released a poll showing an increase in support for his impeachment and removal from office.

"From the day I announced I was running for President, I have NEVER had a good @FoxNews Poll. Whoever their Pollster is, they suck. But @FoxNews is also much different than it used to be in the good old days," Trump tweeted at the time.

The president then launched a series of personal attacks at Fox News personalities whose opinions he views as unfavorable, including Judge Andrew Napolitano.

"With people like Andrew Napolitano, who wanted to be a Supreme Court Justice & I turned him down (he's been terrible ever since), Shep Smith, @donnabrazile (who gave Crooked Hillary the debate questions & got fired from @CNN), & others, @FoxNews doesn't deliver for US anymore," Trump added. "It is so different than it used to be. Oh well, I'm President!"

Fox News anchor Bret Baier, responding to a presidential attack in 2019 after the network released an unfavorable poll about Trump's chances in the 2020 election, said that "we have a news side and an opinion side. The opinion folks express their opinions. We do polls. Our latest poll had the Democratic candidates head-to-head, several of them ahead of President Trump. And this poll tracks exactly what the Real Clear Politics average of polls — even a little the other way — and this poll matches what we are seeing out there."

"Say this for Buttigieg. He's willing to be questioned by Chris Wallace, something you've barely done since you've been president," Hume wrote on Twitter.

You can watch the full interview below via YouTube: