Bartiromo predicts "hundreds of thousands" of US coronavirus cases: "I don't want to panic anybody" 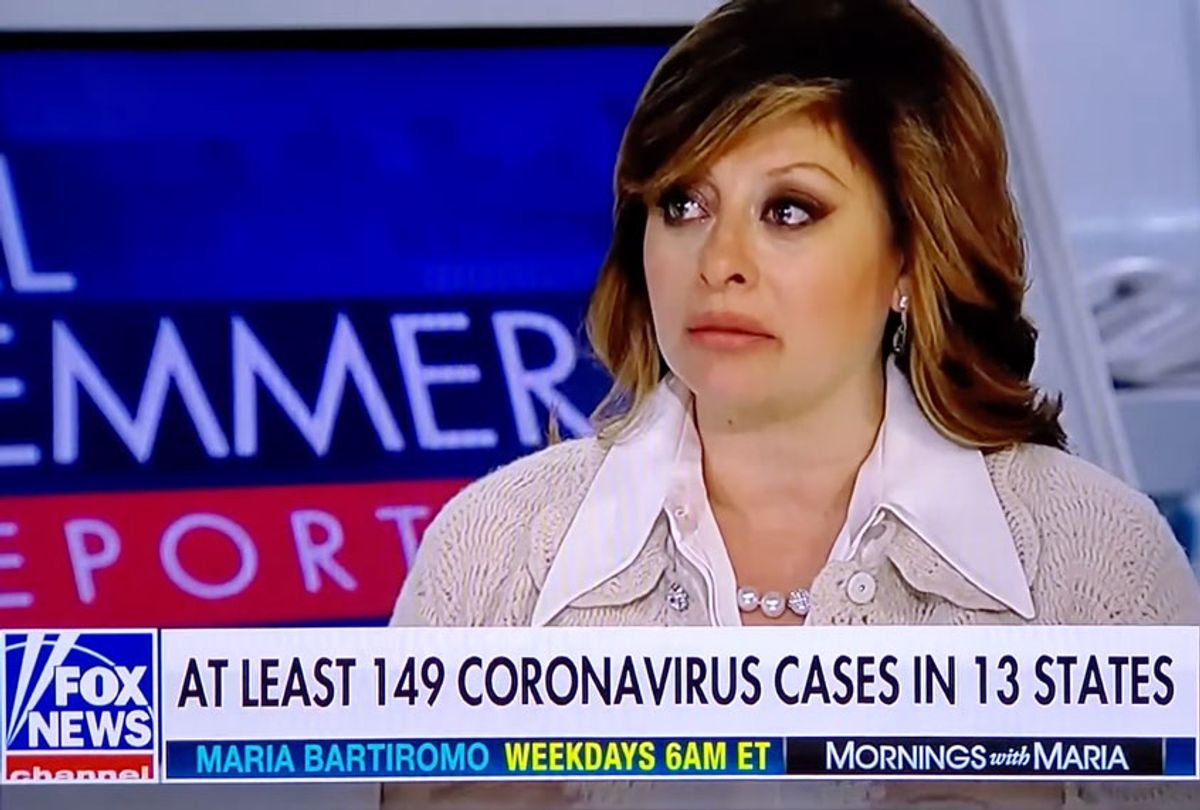 Editor's Note: As of April 3, there have been more than 240,000 confirmed COVID-19 cases in the U.S., according to the Johns Hopkins University Coronavirus Resource Center. Published nearly one month ago, this article contrasted Bartiromo’s remarks with those made by other Fox personalities and guests, which were categorized as “disinformation” for downplaying the pandemic and scapegoating marginalized groups.

Maria Bartiromo predicted Thursday during an appearance on Fox News that "hundreds of thousands" of people will be infected with the coronavirus in the U.S. as disinformation continued to spread on the right-leaning network about the outbreak.

"I think you have to expect constant volatility. It's going to be down 1,000, up 1,000. A lot of back and forth. A lot of volatility," Bartiromo told Fox News host Bill Hemmer when asked how the coronavirus would impact the stock market. "Why? Because there's so much nervousness on Wall Street and really throughout the country. We don't know enough. We have not gotten enough information. The administration tried to get ahead of this last week. You know that. They said we will see more cases."

Bartiromo added that she expected the numbers to reach the hundreds of thousands over "the next six months to a year."

Fox personalities have spread much misinformation about the coronavirus since the pandemic arrived stateside. Several segments on Fox News have blamed the homeless population for spreading the virus, even though there is no evidence to support such a claim.

Jesse Watters insisted that he would beat the virus if he caught it with "the power of positive thinking." Earlier this week, the host falsely claimed that the coronavirus outbreak started because of Chinese people "eating raw bats and snakes," an inaccurate assumption rooted in racism.

President Donald Trump also appeared on the network, telling Sean Hannity that "we have thousands or hundreds of thousands of people that get better, just by, you know, sitting around and even going to work, some of them go to work, but they get better."

Secretary of Commerce Wilbur Ross appeared on Bartiromo's Fox Business Network program in January and predicted that the coronavirus would help the American economy. At that time, the virus had not spread to the U.S. Ross told Bartiromo that the outbreak gave "businesses yet another thing to consider when they go through their review of their supply chain."

He added, "On top of all the other things, because you had SARS, you have the African swine virus there. Now you have this. It's another risk factor that people need to take into account, so I think it will help to accelerate the return of jobs to North America. Some to U.S. probably some to Mexico, as well."