The case for breakfast food prep? Try this versatile recipe you can assemble on the fly with different toppings 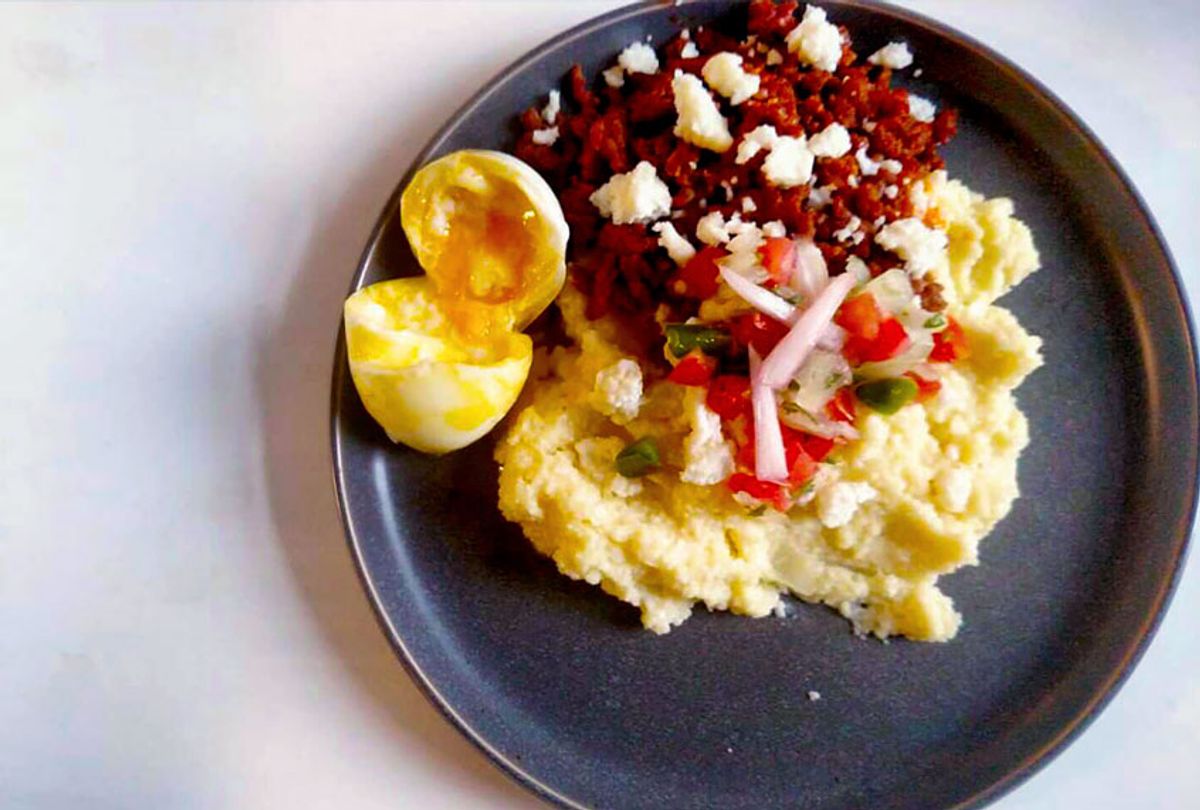 When I'm bleary-eyed before my first cup of coffee, the last thing I really want to do is full-on cooking. You know — chopping, mincing, turning on a blender. That said, I'm all about a hearty, restaurant-quality meal that possesses more variety of tastes and textures than something basic like a slice of toast or bowl of cereal.

This, my friends, is where food prep comes in. Until recently, I thought of food preparation as a venture dedicated solely to lunches and dinners; a way to ensure that I didn't spend $12 on sad desk salads or come home to frozen pizza. But adding some breakfast options to your food preparation routine means that your mornings will be more about assembly than early-morning culinary innovation — and the payoff is totally worth it.

One of my current favorites in rotation is this Mexican-inspired grits breakfast bowl. Here are the main components you'll need to prepare ahead of time.

In a large pot, combine 4 cups of water and 1 ½  cups of stone-ground corn grits, and bring to a boil over high heat. Once the contents of the pot begin to bubble, immediately cover and remove from the burner. Allow them to steam off-heat for 15 minutes. You can do other things with this precious time (like prep the pickled onions or, I don't know, listen to "The Daily").

Uncover the grits and bring them back to a boil, stirring regularly for 20 minutes. Kind of like risotto, you can't neglect the grits during this portion of cooking or they'll clump or burn.

Once most of the water is absorbed, remove from heat and finish with a stick of unsalted butter, 1 cup of milk (or cream, if you're feeling decadent) and 1 teaspoon of Kosher salt.

Allow the grits to fully cool, and then you can refrigerate them for up to seven days. A note on reheating grits: they will become something of a solid mass once refrigerated. No fear, though. When ready to eat them, you can just add a tablespoon of water or cream to the mix and bring them to a simmer in a small saucepan.

I'm of the Bon Appetit school that the best soft-boiled eggs are made in six minutes and 30 seconds. As writers Chris Morocco and Amiel Stanek put it, "we find that six-minute eggs have a touch of translucent white (gross), and seven-minute eggs have a bit of cooked yolk (bummer)."

Split the difference, and you have a perfectly jammy, savory little umami bomb. Bring a saucepan of water to a boil, and then slowly lower 5 eggs into the water using a slotted spoon. Allow them to cook for six and a half minutes, then remove them from the boiling water using that same slotted spoon and place them in an ice bath. Peel and store in a sealed container.

Soft-boiled eggs can be made and peeled three to four days ahead of time (you can reheat them by placing them in simmering water for a minute before serving, but they also taste delicious at room-temp).

This step is pretty simple. Pick up a pound of ground Mexican chorizo (as opposed to Iberian chorizo, which is a dry-cured meat) at the supermarket or butcher. Toss it in a pan and cook over medium heat until the meat is completely browned. Drain the grease, and store it in an airtight container.

If you're vegetarian or trying to reduce your meat consumption, vegan soy chorizo or minced and sauteed mushrooms (seasoned with a little garlic, cayenne pepper and paprika) are great alternatives.

Thinly slice 1 red onion, and place it into a large bowl. Cover it with ⅓ cup of warm water, ⅔ cup apple cider vinegar, 1 tablespoon of sugar and a generous pinch of salt. Let them sit at room temperature for at least 45 minutes.

These can be made up to two weeks ahead of time.

Now that you have the basics prepared, let's make our bowl. Place a hearty scoop of grits into a bowl and top with a soft-boiled egg, a few tablespoons of chorizo and some pickled red onions. From there, get creative with your other toppings. Some of my other favorite include:

This dish is also hearty and versatile enough for a breakfast-for-dinner situation; some weeks, it's definitely found its way into both morning and evening slots on my culinary calendar.