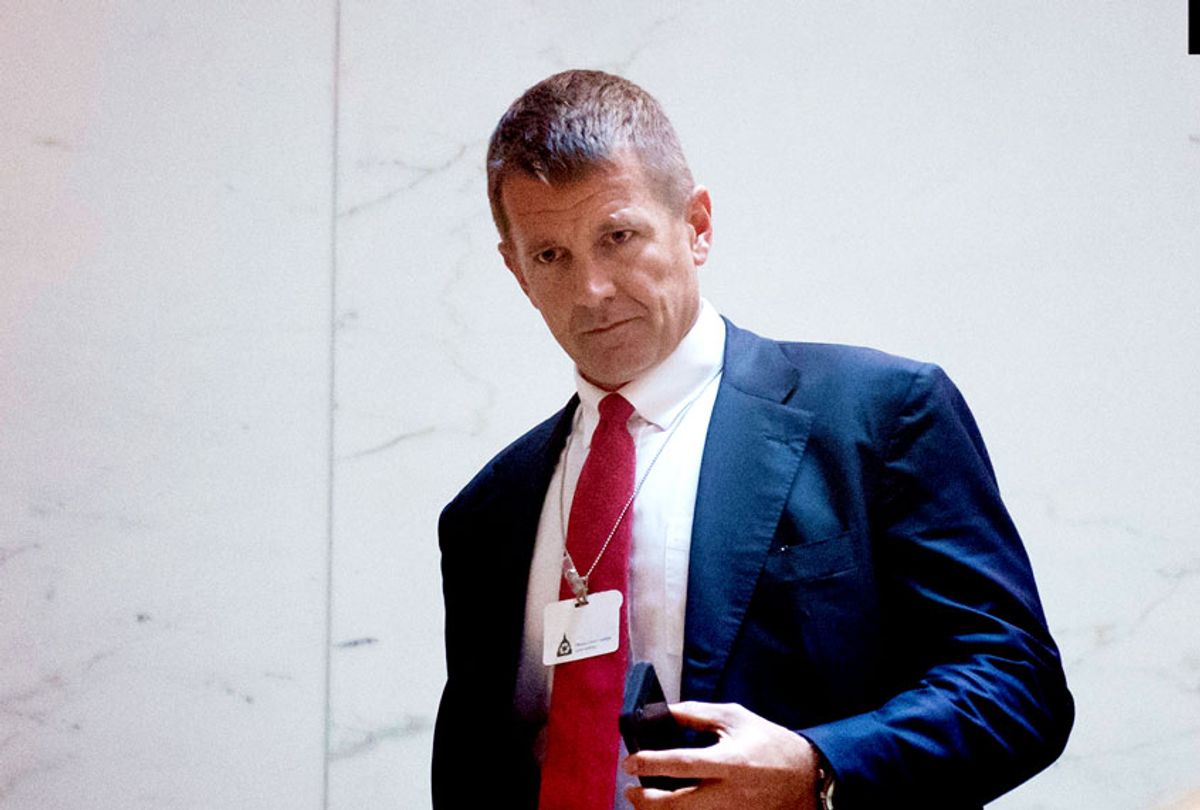 Prince, a longtime informal adviser to President Donald Trump and the brother of Secretary of Education Betsy DeVos, reportedly helped recruit former American and British spies for "secretive intelligence-gathering operations" that included spying on congressional campaigns, labor groups and "other groups considered hostile to the Trump agenda" in an effort to aid Project Veritas, a conservative group that tries to embarrass Democrats, liberal groups and members of the media through hidden camera stings.

The Intercept first reported last year that Prince hired a former MI-6 officer and funded spy training for the group after taking an interest in their work during the 2016 presidential campaign. The former MI-6 spy, RIchard Seddon, helped run an operation to secretly record officials at the Michigan office of the American Federation of Teachers (AFT) and release files that could "damage the organization," according to documents obtained by The Times.

Seddon wrote that one of his operatives "copied a great many documents from the file room." In another email obtained by The Times, Seddon mentioned a recording that featured a local union leader discussing DeVos. That same operative reportedly infiltrated former CIA officer Abigail Spanberger's Democratic congressional campaign in Virginia but was discovered and fired.

Prince, who was involved in discussions to create a secret backchannel between Trump and Russia after the 2016 election, became interested in using spies for Project Veritas "stings" during the campaign, according to the report.

Prince said he wanted employees at Project Veritas, which is run by conservative agitator James O'Keefe, to learn skills like "how to recruit sources and how to conduct clandestine recordings," among other surveillance tactics, The Times reported.

The Intercept previously reported that Prince invited Project Veritas operatives to train on his Wyoming ranch in 2017. One of the members bragged that Project Veritas would be "the next great intelligence agency."

O'Keefe, who received a $20,000 contribution for his group from the Trump Foundation in 2015, has seen its funding explode since the 2016 election. The group received $8.6 million in donations and grants in 2018, while O'Keefe took home a $387,000 salary, according to the group's latest tax filing.

O'Keefe, like Prince, has longtime ties to Trump. He wrote in his 2018 book that Trump previously urged him to infiltrate Columbia University in an effort to get former President Barack Obama's school records. Donald Trump Jr. is listed as an invitee to O'Keefe's upcoming wedding.

But the group's "stings" could prove costly. The AFT's Michigan office sued Project Veritas for more than $3 million in damages, arguing that it was a "vigilante organization, which claims to be dedicated to exposing corruption. It is, instead, an entity dedicated to a specific political agenda."

O'Keefe claimed in a YouTube video that the lawsuit was "frivolous" and intended to "stop Project Veritas from doing the kind of work that it does."

Randi Weingarten, the president of the AFT, told The Times that the lawsuit was intended to hold the group accountable for fraud.

"Let's be clear who the wrongdoer is here: Project Veritas used a fake intern to lie her way into our Michigan office, to steal documents and to spy — and they got caught," she said. "We're just trying to hold them accountable for this industrial espionage."

Kristen Clarke, the president of the Lawyers' Committee for Civil Rights Under Law, said that Prince's operation was a continuation of his sister's assault on public education.

"While Betsy DeVos dismantles public education, her brother, Erik Prince, uses spies to infiltrate and undermine advocacy organizations," she said. "This kind of espionage harkens back to the Hoover era."

Prince is also reportedly under investigation after former special counsel Robert Mueller's investigation determined that he likely lied to Congress about the Russia backchannel talks. The Department of Justice began reviewing whether to charge Prince 10 months after House Intelligence Chairman Adam Schiff, D-Calif., called for an investigation into possible perjury.

"These folks make Nixon look like an amateur," former State Department official Richard Stengel wrote. "Nixon was like a schoolboy compared to Trump."