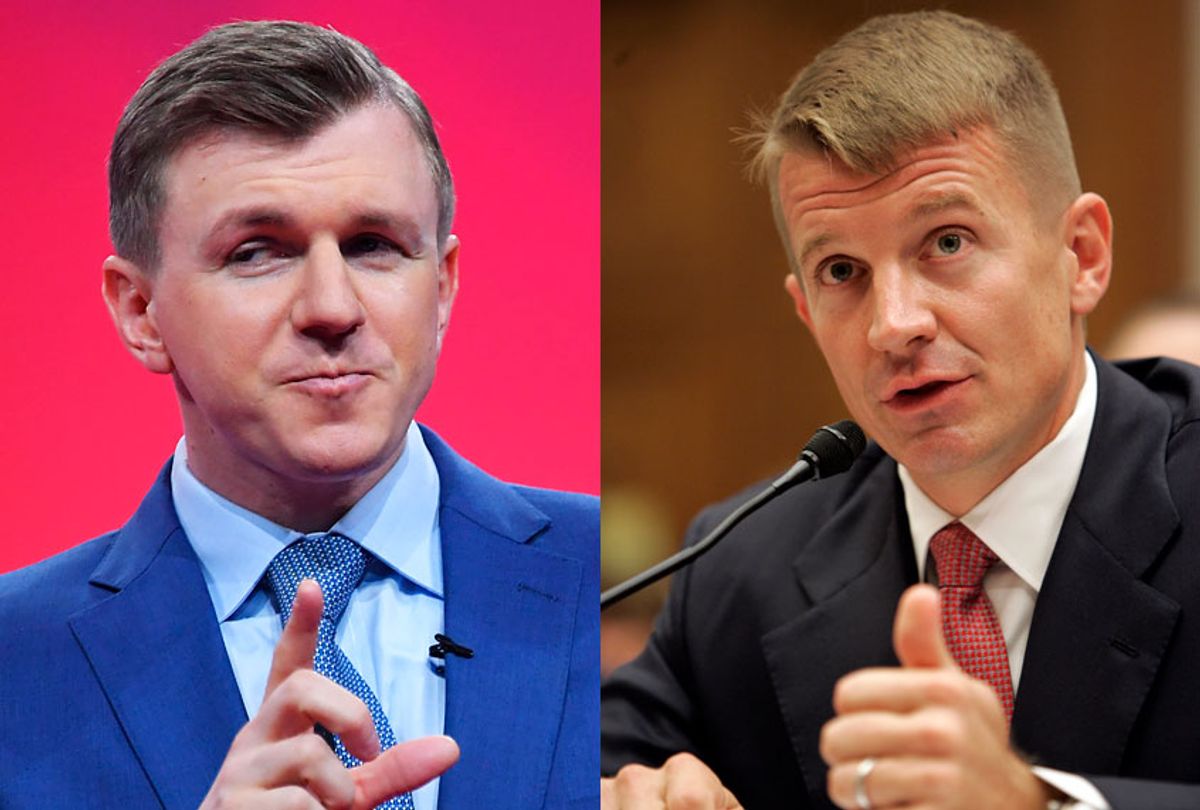 Blackwater founder Erik Prince used the rise of Donald Trump to stage an unlikely comeback that apparently included funding spy training for far-right propagandist James O’Keefe and his Project Veritas group, according to an investigation by The Intercept.

The report details Prince’s efforts to stage a comeback after he was forced to sell his company shortly after his private army came under fire for committing war crimes and murdering civilians in Iraq. Those efforts included the now-infamous meeting with a Russian oligarch to set up a secret backchannel between Trump’s team and Russia in 2017. They also apparently involved funding Project Veritas, a Trump-favored group run specializing in weaponized undercover video exposés (that are often quickly discredited) of Democrats, left-leaning groups and mainstream media outlets.

O’Keefe met with Trump days after he declared his candidacy in 2015 and met Prince, the brother of Education Secretary Betsy DeVos, shortly after during the campaign, according to the Intercept's report.

By that point, Trump had donated $20,000 to Project Veritas, ThinkProgress reported, and met with O’Keefe to try to recruit him to aid his birther conspiracy theory about President Obama.

It’s unclear if Trump’s support led to Prince’s interest in O’Keefe’s group but in late 2015 or early 2016 Prince had arranged for O’Keefe and his members to receive “training in intelligence and elicitation techniques” from retired military intelligence operative Euripides Rubio Jr., according to the Intercept.

A former Trump White House official who spoke with Rubio told the outlet the former special ops member quit after just weeks of training, “complaining that the Veritas group wasn’t capable of learning.”

Prince continued to fund the group’s “training” after Trump’s election. He arranged for the group to receive training from a former British MI6 officer at his Wyoming ranch in the winter of 2017.

During that time, O’Keefe posted photos of him training with weapons online, writing that he was at a “classified location” training in “spying and self-defense” to make Project Veritas “the next great intelligence agency.”

It’s unclear what came of the training or whether Prince had any involvement with the group beyond the training. Just months after O’Keefe posted his photos, Project Veritas was busted by the Washington Post trying to trick a reporter into covering a fake story about disgraced former Alabama Senate candidate Roy Moore, in an apparent attempt to discredit the Post amid Trump’s repeated attacks on the paper.

Following Trump’s election, Prince pushed a plan for the Trump administration to let him privatize the war in Afghanistan by sending a private security team to the country with a plan to convince Afghan officials into mining concessions to tap the country’s mineral resources, not unlike Trump’s proposal to steal Iraq’s oil.

That plan was rebuffed by national security officials. But Prince is now back again with another plan, this time to send his private army to Venezuela.

Prince has been pushing a plan to send a private 5,000-person army to to help overthrow President Nicolás Maduro, Reuters reported. Prince has spent the last several months seeking approval from influential Trump supporters for his proposal.

The Intercept’s Matthew Cole writes that Prince’s involvement in the foreign policy proposals, the funding of Project Veritas and other projects with which he's been involved during the Trump era suggest he is “no longer satisfied” with simply contracting out private armies.

“Prince is now attempting to offer an entire supply chain of warfare and conflict. He wants to be able to skim a profitable cut from each stage of a hostile operation, whether it be overt or covert, foreign or domestic,” Cole wrote. “His offerings range from the traditional mercenary toolkit, military hardware and manpower, to cellphone surveillance technology and malware, to psychological operations and social media manipulation in partnership with shadowy operations like James O’Keefe’s Project Veritas.”