Anthony Scaramucci: "Donald Trump is the virus," and he should be put under verbal "quarantine" 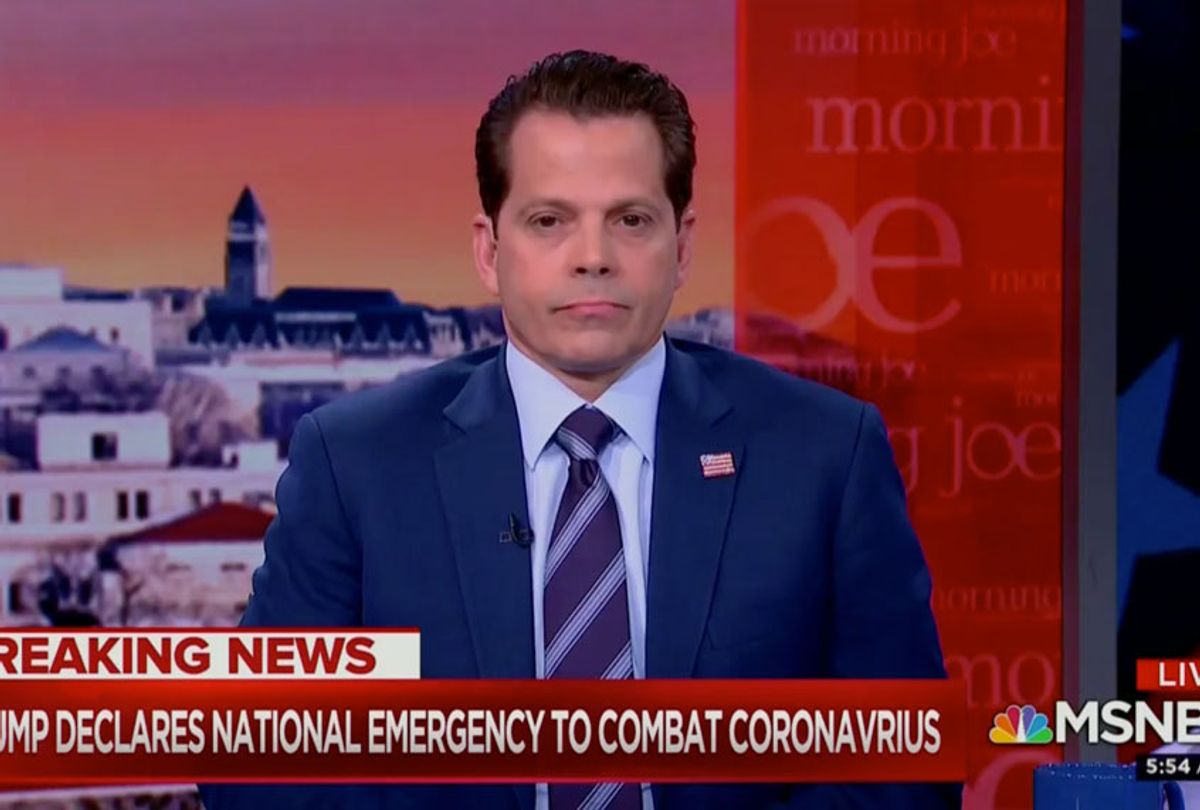 President Donald Trump is "the virus" threatening America's economy during the coronavirus outbreak, and he should be put under a "verbal communication quarantine to help out the nation," former White House Communications Director Anthony Scaramucci told MSNBC's Joe Scarborough on Monday.

"The next thing that the market knows — and people are starting to figure this out now — is that Donald Trump is the virus," Scaramucci said to Scarborough. "At the end of the day, what he's done is affected and replicated through the executive branch, and he's destroyed the crisis management elements of the executive branch that we need right now."

Earlier in the interview, Scaramucci predicted that the American economy would take a major hit because of the outbreak, saying that "you literally have set a pause button on the global economy for three to six months." He pointed out that many Americans live paycheck-to-paycheck or from day-to-day revenue, and "there are many businesses and many families that won't be able to sustain that."

Scaramucci expressed a similar thought on Twitter on Monday morning, writing that "⁦@realDonaldTrump⁩ has to go in November in order to save ourselves. Stop listening to lies." His tweet included a link to a New York Times article by David Leonhardt that listed Trump's numerous lies about the coronavirus outbreak. These included lying about the seriousness of the outbreak, claiming that warm weather would kill the virus, insisting that anyone who wants a coronavirus test can get one and blaming former President Barack Obama's administration for his own faulty response.

The Trump administration implemented a number of policies that weakened America's ability to fight the ongoing coronavirus outbreak. In addition to disbanding its global health security team in 2018, it asked for a $65 million budget cut to the CDC's small center on emerging and zoonotic (meaning animal-to-human transmitted) infectious diseases in 2018 (or a 10% cut), then a 19% reduction in 2019 and a 20% reduction in 2020.

While most of this funding was restored by Congress, Trump still succeeded in reducing the overall spending for relevant CDC programs by 10% from what it was in 2016 after being adjusted for inflation. He also proposed cutting the overall CDC budget by $1.3 billion in the 2020 fiscal year.

Scaramucci told Salon in 2018 that he believed the reason his brief tenure as communications director did not work out — he only held the office for 11 days — is that his style clashed with that of the Trump White House.

"I think I demonstrated that I'm incapable of being one, and so my fizzling out really came from just being too rank honest about the situation, and probably too graphically honest about the situation, so that's unacceptable to people," Scaramucci said. "They would prefer the lies and the spinning and all the nonsense that goes on inside of Washington, and so I get all that. I always felt that the most successful politicians would take an adage from what Harry Truman said about himself. He said, 'Listen, I am a lobbyist, and it's my job to represent all Americans, whether they voted for me or they didn't,' and that's the role of the president."