Biden "has a good heart" and is "motivated by his love for our country and the American people," Gabbard says 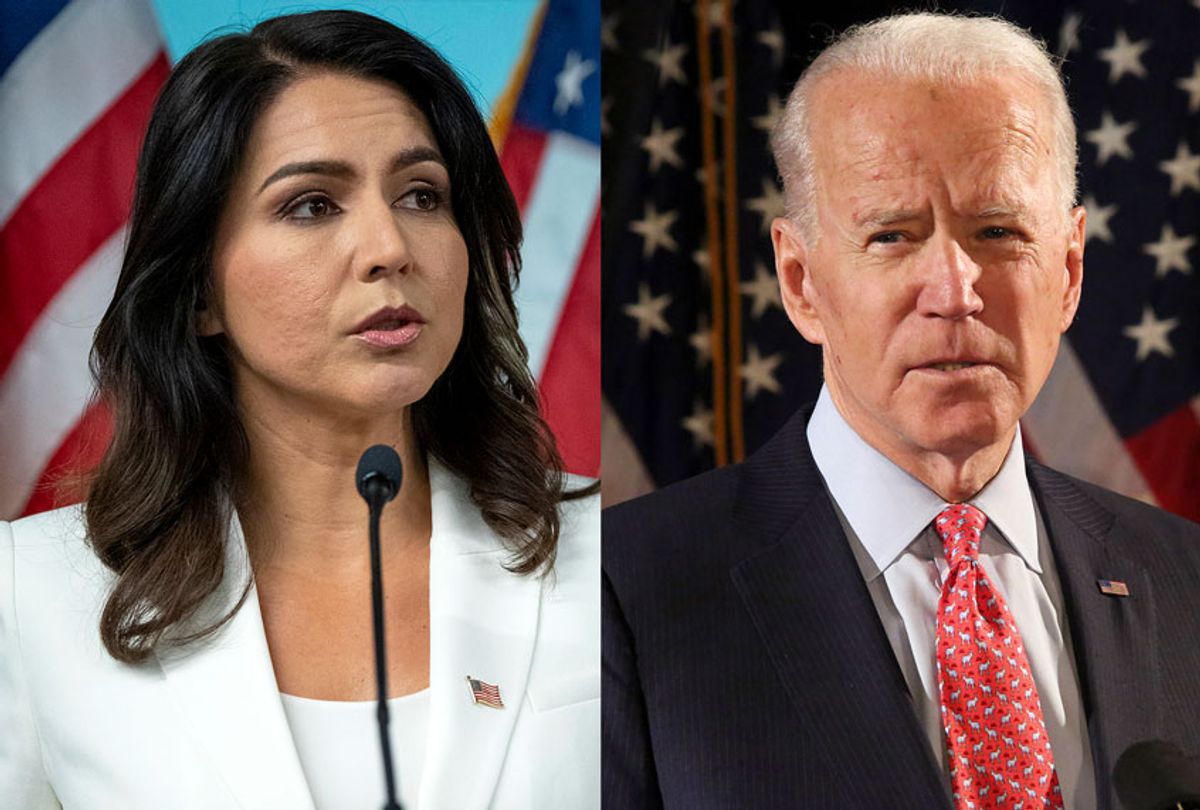 After mentioning how Americans need to unite during the coronavirus pandemic, Gabbard concluded that "I feel that the best way that I can be of service at this time is to continue to work for the health and well-being of the people of Hawaii and our country in Congress, and to stand ready to serve in uniform should the Hawaii National Guard be activated."

She added that Biden's recent primary victory established that Democratic voters have chosen him as "the person who will take on President Trump in the general election." Though she does not agree with Biden on every issue, Gabbard said she knows "that he has a good heart and he's motivated by his love for our country and the American people. I'm confident that he will lead our country guided by the spirit of aloha, respect and compassion, and thus help heal the divisiveness that has been tearing our country apart."

Her platform advocated for progressive economic policies and a noninterventionist foreign policy. The congresswoman attempted to appeal to Vermont Sen. Bernie Sanders' left-wing supporters by pointing out that she was one of the few sitting members of Congress who endorsed his 2016 presidential campaign. She resigned as vice chairman at the Democratic National Committee in doing so.

Her campaign was plagued by allegations that she had inappropriate ties to two dictators: Russian President Vladimir Putin and Syrian President Bashar al-Assad. She filed a $50 million lawsuit against former Secretary of State Hillary Clinton, the 2016 Democratic presidential nominee who described Gabbard as "the favorite of the Russians" and as a "Russian asset." Defending her lawsuit in January, Gabbard claimed that "when you have someone as powerful as Hillary Clinton seeking to smear my reputation, essentially implying that I'm a traitor to the country that I love — what she essentially is doing is taking my life away."

Gabbard did not limit her criticisms of Clinton to that lawsuit. During a primary debate in November, she claimed that the Democratic Party "has been and continues to be influenced by the foreign policy establishment in Washington, represented by Hillary Clinton and others' foreign policy, by the military industrial complex and other greedy corporate interests." President Donald Trump retweeted a clip of her remarks before the debate had ended.

Gabbard's comments continued a pattern in which she curried favor among Republicans, frequently appearing on Fox News to defend Trump's actions during the Ukraine scandal and speak out against his impeachment. She was one of three Democrats who did not vote to impeach Trump, instead voting "present." The two other Democrats who opposed Trump's impeachment, Reps. Jeff Van Drew of New Jersey (who has since become a Republican) and Collin Peterson of Minnesota, voted as such.