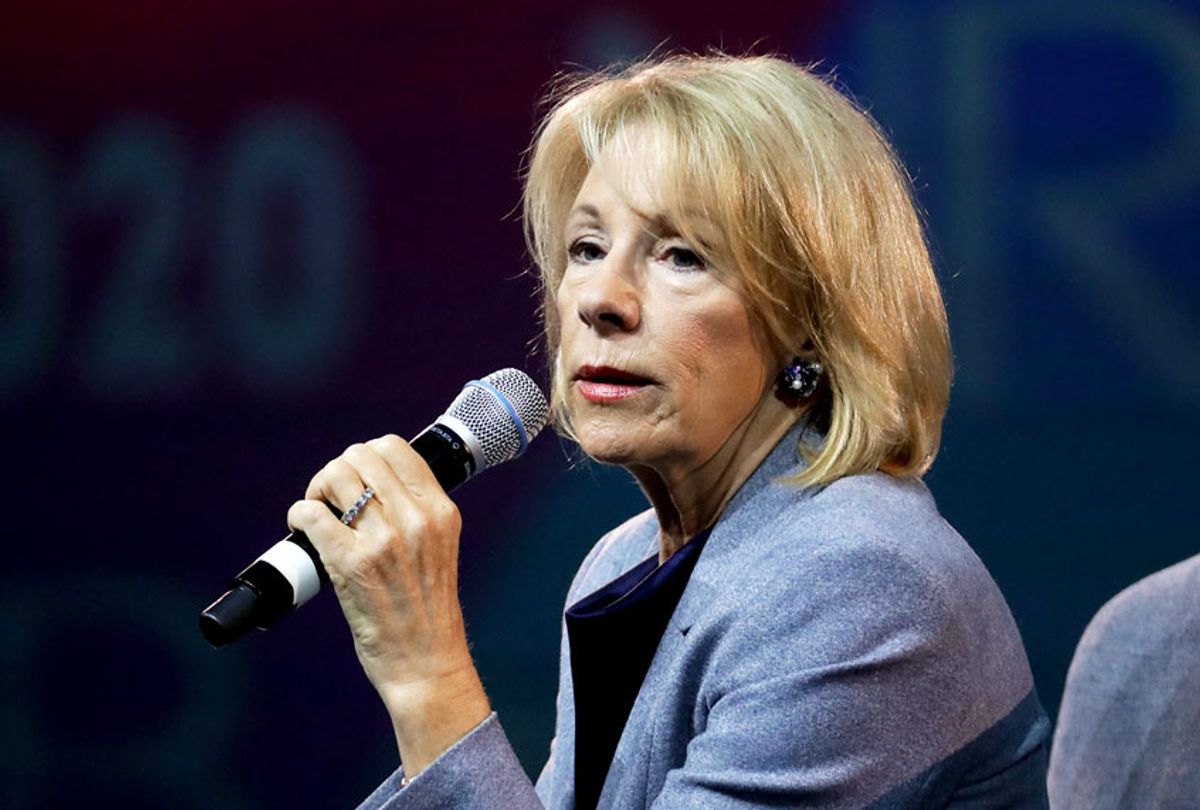 Fox News sought to reassure Education Secretary Betsy DeVos that she would get an "easy interview" if she agreed to appear on anchor Maria Bartiromo's show, according to a trove of emails reviewed by The Hollywood Reporter.

The emails show it took some urging from producers to get DeVos to agree to an interview.

"Remember any question she doesn't feel comfortable answering — she can choose to not answer and pivot the topic — and Maria is seasoned enough to understand and move on. ... So no worries on that front. This will be an easy interview and enjoyable," a Fox producer wrote to DeVos' press secretary in November of 2018, days before she appeared on the show.

"This should be totally fine," DeVos' spokesperson replied.

The appearance was later criticized by Media Matters as a "softball interview" in which Bartiromo "failed to ask a single question about either changes DeVos has initiated to rules about campus sexual assault, which would be harmful to survivors, or her failure to implement student debt forgiveness."

Instead, the interview focused on criticizing teachers' unions and public education.

The email was one of thousands showing a cozy relationship between Fox News and the Trump administration, which has repeatedly sought to hire the network's pundits and vice versa. The emails were obtained through a Freedom of Information lawsuit filed by the advocacy group Democracy Forward.

A February 2019 email showed that a staffer for Fox News anchor Bret Baier invited DeVos to accompany him to the annual Gridiron Dinner in Washington.

"Bret Baier would be honored if you would be his guest at the 2019 Gridiron Dinner," the email said.

The following month, Baier appeared upset that DeVos agreed to appear on Dana Perino's show but not his.

"Again?" Baier questioned in an email to a producer and two Education Department staffers. "Is there a reason why we were passed over for this?" Baier's producers asked the department.

The relationship flowed both ways. The Education Department tried to set up a "coffee date" between DeVos and the hosts of "Fox & Friends" in April 2019 but two of the hosts were unavailable, according to the report.

Another email, sent by DeVos' spokesperson in September 2019, asked the network to let DeVos roll out a new initiative on the network's morning show.

"I'd love for her to come on ['Fox & Friends'] on the last day of the tour, when she'll be in her home state, in Detroit, to talk to your viewers about her education freedom agenda," the email said.

Discussing an October interview with Baier, DeVos' spokesperson sought to get ahead of any potentially problematic questions.

"Do you expect any off topic questions — impeachment, mulvaney, perry, etc. ... please let me know if so," the email said.

In one email to a USDA staffer, a Fox News producer asked for help finding a pro-Trump guest.

"We are looking for a Dairy farmer who supports President Trump's advocacy for them and calling out Canada's protectionist trade policy when it comes to milk," the email said.

The relationship was so close that Trump administration staffers floated Fox personalities for White House jobs.

The symbiotic relationship between the White House and the network frequently derided as "state TV" was on full display as the new coronavirus spread in the United States. The network first sought to echo Trump's attempts to downplay the risk posed by the virus before quickly pivoting to a more serious tone after Trump changed his tune and finally acknowledged the crisis was "bad."

Once Trump pivoted again on Monday and declared that it was more important to restart the economy than to save lives by locking down cities, the network quickly changed its tune as well, decrying the state of the economy and pushing unproven drugs touted by the president. The network hosted Texas Lt. Gov. Dan Patrick on Monday, who argued that letting higher numbers of people die was a small sacrifice to save the economy.

"My heart is lifted tonight by what I heard the president say," Patrick said. "My message is, let's get back to work. Let's get back to living. Let's be smart about it. And those of us who are 70-plus, we'll take care of ourselves. But don't sacrifice the country."