"These numbers right now are not relevant, and whether they're bigger or smaller in the short term," Mnuchin says 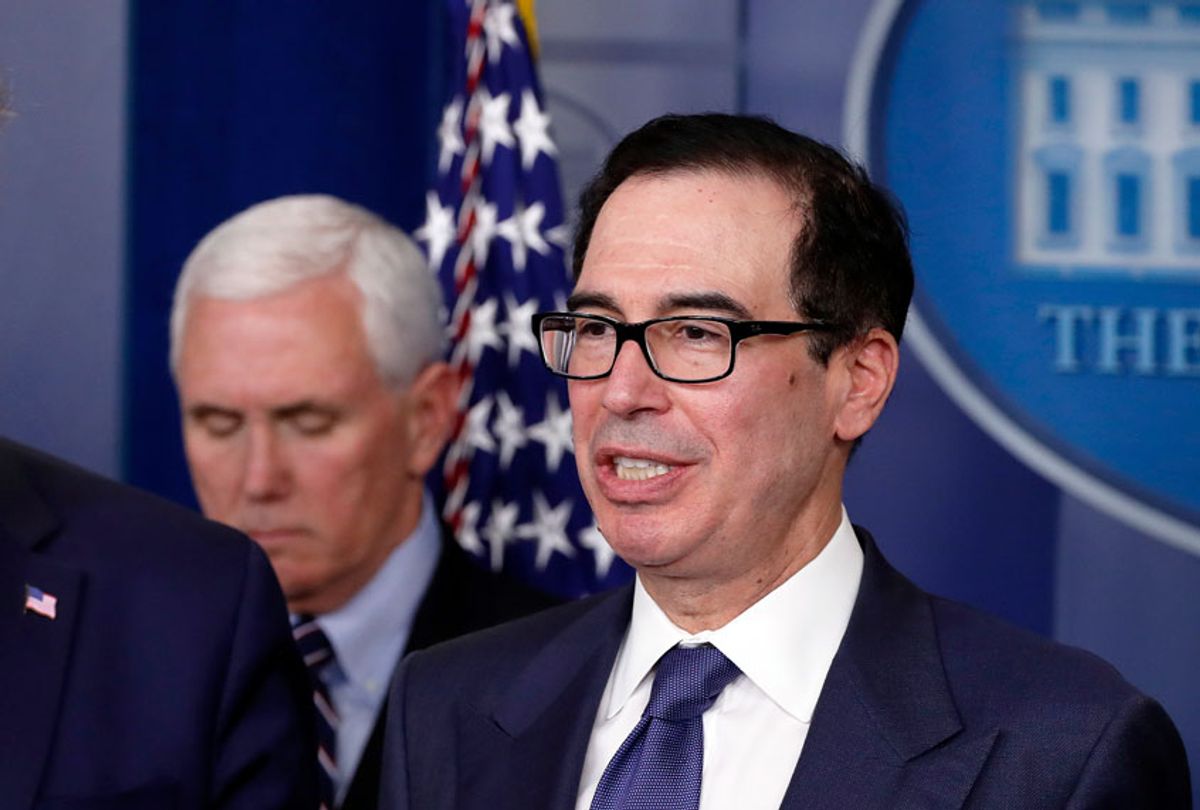 Nearly 3.3 million Americans applied for unemployment benefits after being laid off last week amid the coronavirus pandemic, a record-setting sum which Treasury Secretary Steve Mnuchin dismissed as "not relevant" after a corporate-friendly $2.2 trillion stimulus bill passed Wednesday through the Senate in a unanimous vote.

"To be honest with you, I just think these numbers right now are not relevant, and whether they're bigger or smaller in the short term," Mnuchin told CNBC's David Faber during a Thursday interview. "Obviously, there are people who have jobless claims, and again, the good thing about this bill is the president is protecting those people. Now with these plans, small businesses hopefully will be able to hire back a lot of those people."

He added, "Last week, they didn't know if they had protections. They didn't have any cash. They had no choice. Now, with this bill passed by Congress, there are protections, and as I said, hopefully, those workers will be rehired."

Mnuchin also argued that there are industries which are hiring new workers "as fast as they can," including "grocery stores, pharmacies — you know, delivery services."

The stimulus bill provides $350 billion in relief for small businesses, though that figure comes with a number of conditions. It takes the form of a forgivable loan program and would require the small businesses — defined as companies with 500 or fewer employees — who benefit from the relief not to lay off their employees. Businesses can receive loans of up to $10 million based on how much they paid their employees during the first two months of 2020. The loans would carry a 4% interest rate, and if the businesses maintain the average size of their full-time workforce based on when they first received the loan, the principal would be forgiven. They would only need to pay off the interest.

Because it will take months for that money to reach workers, however, many businesses will likely go under before they can take advantage of the loans. The aid will also not help workers who were laid off before their employers receive a loan.

The stimulus also includes a $454 billion bailout program, which can be leveraged 10 times over by the Federal Reserve. Some of that money would help companies that laid off their workers, but businesses could lay off as much as 10% of their workforce over the next six months and still qualify. In addition, because the program bases its calculations off of this week's employment, it would not count the 3.28 million Americans who filed for benefits during that period.

You can watch the full segment below via Twitter: