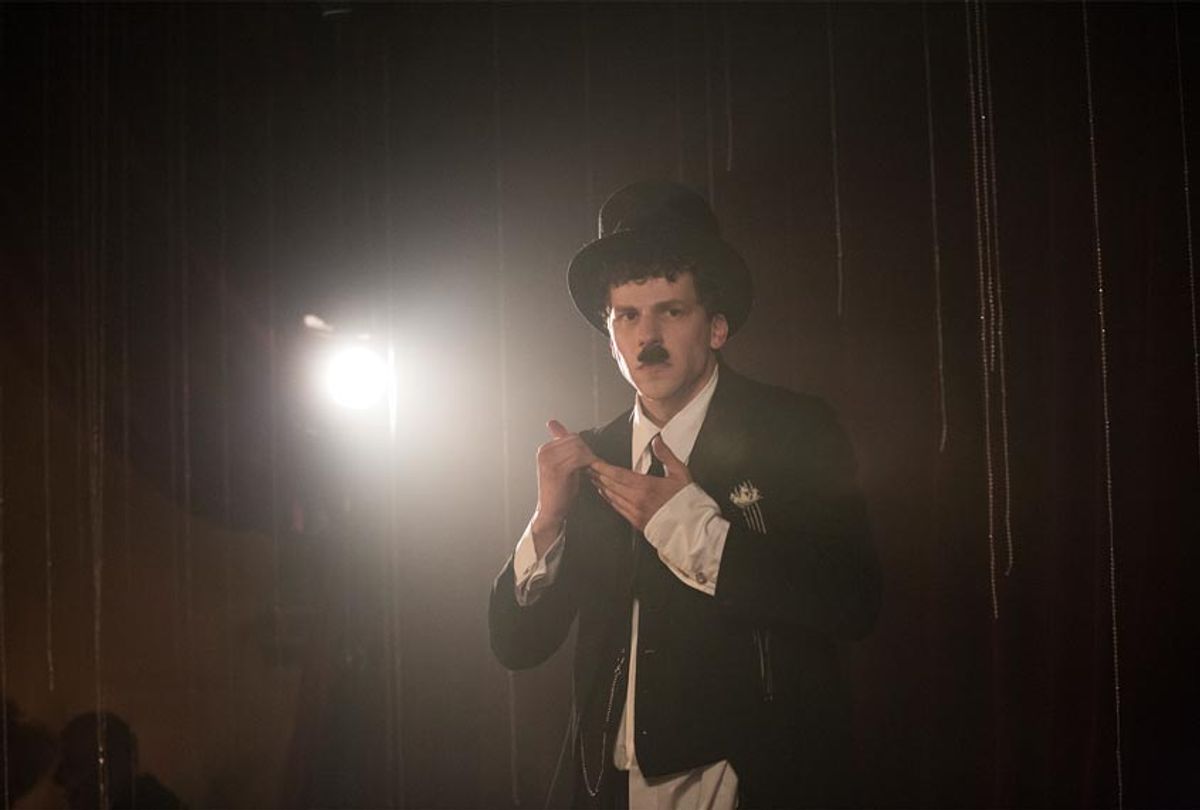 When the new Jesse Eisenberg drama "Resistance" was first announced for a late March release date, the timing seemed to telegraph that last wintry rush of serious cinematic fare before the annual warm weather popcorn fare blitz. Now, however, the movie feels like a more timely lesson in the horror of shared trauma and the power of resilience. Would I feel so emotional about this film, which is available now on demand, were our world not changing so drastically, so quickly? Likely not, but here we are.

It's a telling insight into the priorities of the film's writer and director Jonathan Jakubowicz that "Resistance" takes its time before introducing its hero, a French butcher's son named Marcel Mangel (Jesse Eisenberg). First, we have to experience the carnage of Kristallnacht though the eyes of a young girl, as her already tenuous sense of security is destroyed and her parents are murdered by Nazis. Elsbeth is then sent, along with a flock of other recent orphans, to Strasbourg. She encounters Marcel when he is reluctantly recruited to help the children settle in.

Marcel, an aspiring actor, doesn't care for kids, because every movie plot demands its hero learn and grow. Sure enough, he's soon deploying his considerable skills of pantomime not just to entertain the tykes, but to teach them valuable techniques of staying quiet and hidden. As the war rages on, and the French occupation becomes more pronounced and brutal, Marcel becomes a member the resistance, one whose gifts for performance and fine art — he has a knack for forging identification papers — make him a unique asset. It all eventually culminates in his biggest challenge — shepherding Jewish children across the border to Switzerland. Hiding in plain sight, he poses as a scout leader, one with the more innocuously French-sounding name Marcel Marceau.

The real Marceau, who died in 2007, is today best known as the person you think of when someone says the word "mime." After the war, he became an international star, and he remains perhaps the greatest master in what he referred to as "the art of silence" the world has ever seen. Those are some big, softly treading shoes for Jesse Eisenberg to fill. Yet in some ways he's likely been preparing for this role his entire life — his mother is a former children's party clown. Speaking to Buzzfeed in 2013, the actor said his mom's example "taught me… about the discipline about performance." And in the moments when he's channeling Marceau's fluid physicality, the man who gained his earliest notoriety in roles calling for big That Awkward Guy energy is downright revelatory.

But the challenge for a film like "Resistance" is finding that delicate balance between life-affirming joy and unfathomable evil. It's terrain famously paved in films like "Life Is Beautiful," and more recently in Taika Waititi's ambitious satire "Jojo Rabbit," with varying degrees of success. "Resistance" undeniably flails at times to find its tone, alternating between the gentle Marcel's playful interactions with the children and the nail-biting tension of the Nazi regime. To that end, the film seems to sense that its more compelling storyline isn't Marcel's, Instead, it lingers on its chief antagonist Klaus Barbie (Matthias Schweighöfer), the Gestapo leader who clearly relished earning his nickname, the "Butcher of Lyon."

The drama of Barbie, the dapper family man with a beautiful wife and baby who turned the Hotel Terminus into his personal torture chamber, is a compelling one. And "Resistance" doesn't quite seem to know what to do with that. It takes expansive detours away from Marcel and the other freedom fighters to go back to Barbie. Here's Barbie, beating a patron of a gay nightclub to death. Here he is, languorously executing townspeople. And here he is again, reassuring his wife so he can keep her in the Carmela Soprano plausible deniability zone.

Schweighöfer stops just shy of chewing on the scenery, no doubt a tough feat when you're playing a man who was extreme even by Nazi standards. His scenes are uniformly excruciating in their tension, and they create the foundation of the film's suspense. The problem is that they go on so long, and pack such a heart-stopping wallop, that it's easy to forget the story isn't about him. (That movie already has been made, and it's called "Hotel Terminus.") "Resistance" also stumbles for its uncessary inclusion of a bookending scene of General George S. Patton introducing Marceau to a postwar crowd of American soldiers. It's as if to suggest that American audiences can't be trusted to care about a story that isn't anchored in the Yankee experience.

Yet despite its shortcomings, I find lately I can't stop thinking about "Resistance." We are living now in a wholly different time and through a wholly different crisis. But it feels incredibly relevant to witness stories of sacrifice and bravery, of working together against a common enemy. It feels important to remember what humans can endure in the darkest hours, and that those hours can pass. Most significantly, "Resistance" is a reminder of the truly lifesaving work of artists. "I think it's important to help the children laugh in the middle of this war," Marcel says at a key moment. It's important to help all of us do that. Mr. Rogers said to look for the heroes. In the midst of tragedy, the helpers are the heroes, and a figure known best for his silence still has a lot to tell us about survival.

"Resistance" is currently available to rent on demand from Amazon and iTunes.