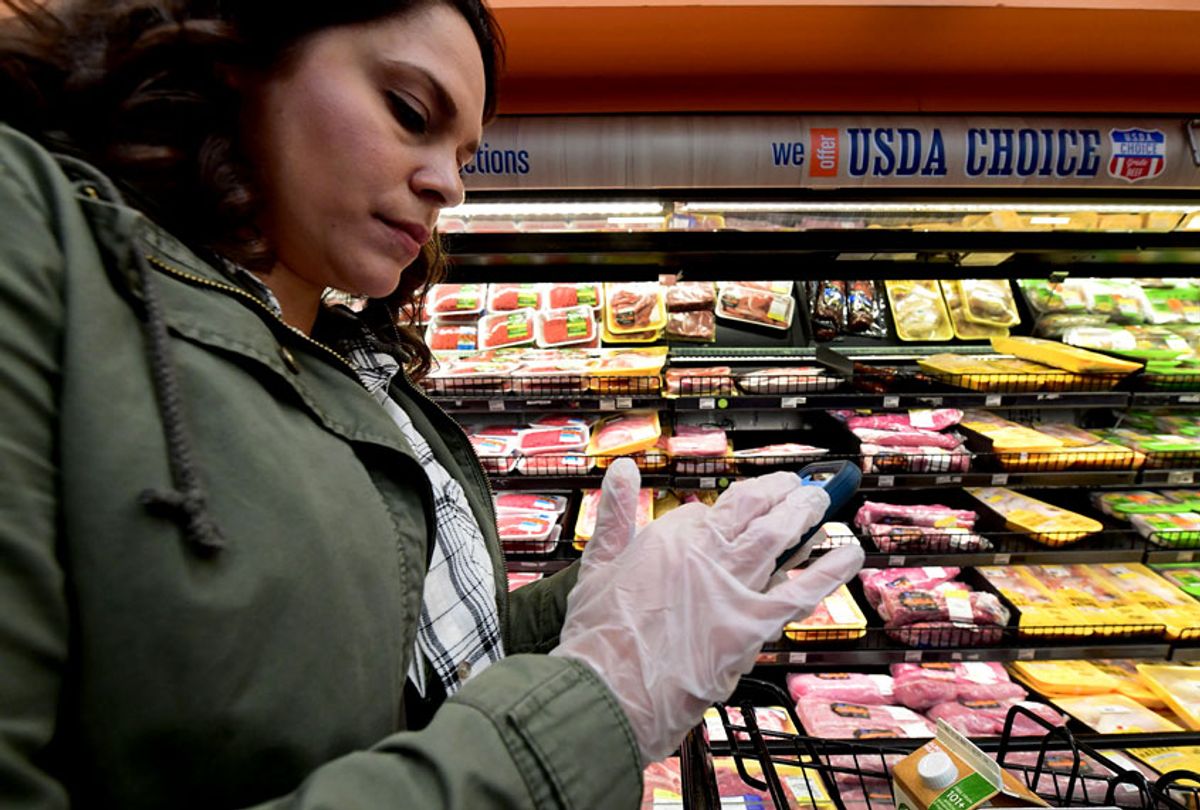 Instacart employee Monica Ortega wears gloves while using her cellphone to check orders while picking up groceries from a supermarket for delivery on March 19, 2020 in North Hollywood, California. (FREDERIC J. BROWN/AFP via Getty Images)
--

Leave it to a global pandemic to reveal which workers are absolutely crucial to our survival. That shortlist of essential workers includes those who work for Instacart, a grocery delivery company whose workforce epitomizes the on-demand, precarious contract labor that has become synonymous with the tech industry. Instacart's contractor army, who pick up groceries based on orders made on an app then drop them off at customers' homes, have taken on an essential public health role in the pandemic economy — working long hours to deliver groceries to those who can't do grocery shopping on their own or fear exposure to the novel coronavirus.

While the social capital of Instacart's on-demand workers has vastly increased in the past few weeks, tangible support — including basic protections or salaries — from their employer has not. The realization of these jobs as increasingly dangerous coupled with a lingering feeling of exploitation has led many of these workers to launch a digital strike today, turning the Instacart app off indefinitely until their demands are met.

Given the conditions of labor and the necessity of Instacart's workforce to the continuing function of civilization, one might be inclined to view their demands as modest. The list of demands includes hand sanitizer/sprays and soap at no cost for workers; a hazard pay increase of an extra $5 per order; changing the default in-app tip amount to be at least 10 percent of the total order; an expansion of pay for workers impacted by COVID-19 to anyone who has to self-quarantine for other reasons, or has a pre-existing condition; and to extend the April 8th deadline to apply for these benefits.

Recently, Instacart offered up to two weeks of paid sick leave to workers, but only if they test positive for the novel coronavirus. This so-called offer only lasts until April 8.

In an open letter penned by Instacart workers and the Gig Workers Collective, an organizing group, workers say that Instacart has "turned this pandemic into a PR campaign." Last week, Instacart Founder and CEO Apoorva Mehta wrote a Medium post in which he announced the company's plan to hire 300,000 full-service shoppers "to meet the increasing customer demand," and praised current shoppers "who stepped up as household heroes during this time."

Dspite Mehta's words of praise for his contractors, Instacart shoppers who spoke to Salon said they haven't been treated like heroes at all.

"I get a pop-up in my app that says, 'Oh you're a household hero.' That's great Instacart, but why don't you take those words and put them into action?" Sarah Polito, a 28-year-old Instacart shopper in New York City, told Salon. "Show us how we are that household hero and what you are going to do for us during this crisis."

Polito said working for Instacart during this time has been "pretty scary," and that her stomach "goes into knots" every time she walks into a grocery store.

"We're seeing a high increase of like triple orders, which we have to do for extremely low rates, and it's just frustrating," Polito said. "We're looking to actually make money and do the job, but we're not going to be doing it for the low pay when we're not even getting any type of hazard or precautionary measures given to us to do this job; Why should I risk it for $7?"

For weeks, workers have been asking for the protective gear that they listed in their demands, things like hand sanitizer and sanitation wipes to disinfect shopping carts. Instacart finally addressed their concerns over the weekend after news broke that the strike among shoppers was underway. In a press release, the company said it was working with a third-party manufacturer to make its own hand sanitizer for shoppers. In the same announcement, the company said that it would change the tip default to match a customer's previous tip. "For example, if a customer tips 15% to their shopper for great service, their next Instacart order will automatically default to a 15% tip as well, versus defaulting back to the previous 5% default tip," the press release stated.

Polito said the hand sanitizer that is being offered is in a "teeny tiny travel bottle."

"It's going to last you a day," she said. "I mean, I sanitize my hands every time I get in and out of my car."

Susan Cuffaro, an Instacart shopper in San Diego, California, told Salon she's had to pay out of pocket for personal protective equipment.

"It's been difficult to obtain in some circumstances and a lot of us are using the homemade hand sanitizer with alcohol — our hands are pretty rough and dry right now," Cuffaro said. "A box of gloves I was able to procure cost me $22, and if a batch is going for a $7 payment from Instacart, well that's a pretty big ask to have me go buy these gloves to protect myself and the customer."

Cuffaro added that the hand sanitizer Instacart is offering was first priced in the shopper perk store with a $6.99 price tag.

This is not the first time Instacart workers have gone on strike. Previous pay cuts have led to similar actions, as Salon has reported before. And they aren't the only workers to participate in a labor action today. In Staten Island, Amazon warehouse employees walked off their jobs. In Lynn, Massachusetts, General Electric workers protested silently to demand that they pivot to making ventilators. Sanitation workers in Pittsburgh rallied last week to demand better safeguards, too.

In a statement to Salon, a spokesperson for Instacart said the company respects "the rights of shoppers to provide us feedback and voice their concerns."

"As it relates to today's actions, we've seen absolutely no impact to Instacart's operations," the statement said. "Today, we saw 40% more shoppers on the platform compared to the same day and time last week. Over the last 72 hours, more groceries were sold on our platform than ever before. In the last week alone, 250,000 new people signed up to become Instacart full-service shoppers and 50,000 of them have already started shopping on the platform."

Polito said organizers of Instacart workers hope that this will set a precedent for all gig workers.

"We're doing this for everybody," she said.