The House minority leader has become a total Trump sycophant. In California, Kim Mangone thinks she can beat him 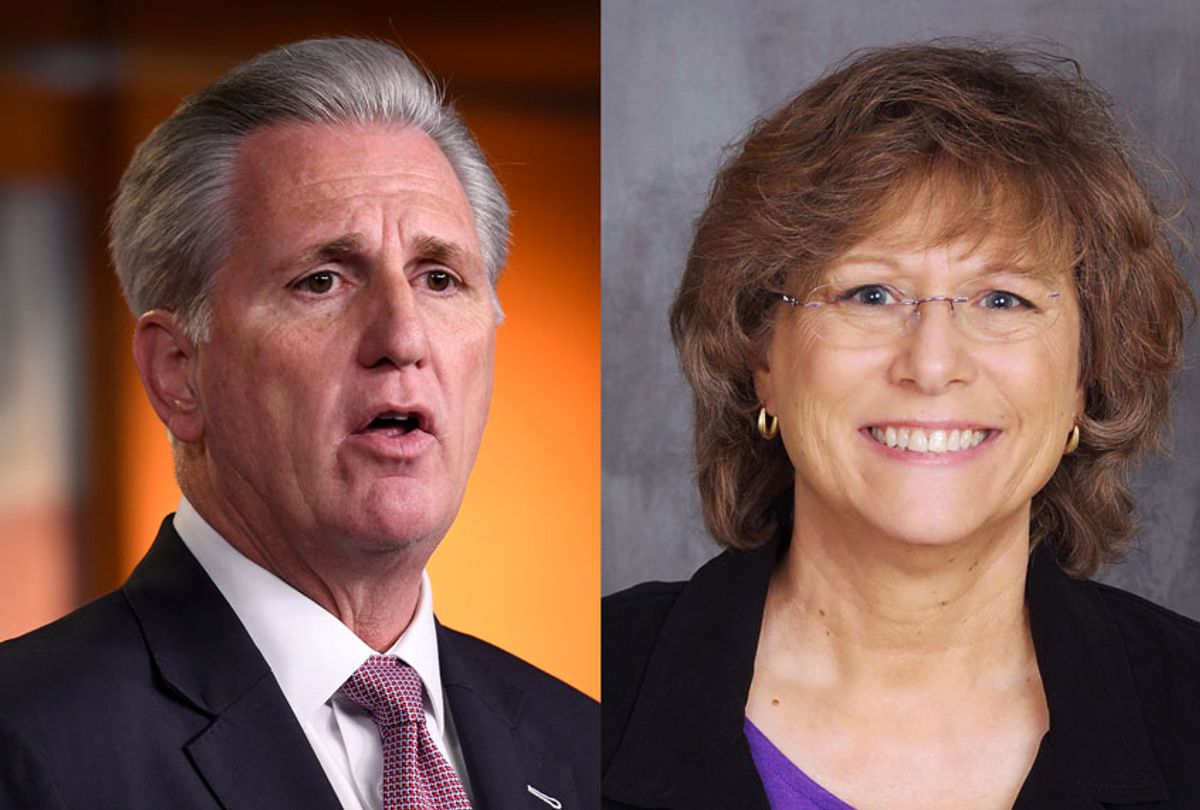 When Rep. Kevin McCarthy, R-Calif., first announced that he would run for House speaker in 2015 (after the departure of John Boehner), the party's far-right Freedom Caucus opposed him on the grounds that he was too moderate. His primary offense: Opposing the 2013 government shutdown, which was orchestrated by House Republicans in a futile attempt to thwart the implementation of the Affordable Care Act.

Much has changed in American politics over the subsequent half-decade. The man chosen to be House Speaker instead of McCarthy, Paul Ryan of Wisconsin, had a tempestuous tenure, one in which he struggled to keep the comparatively moderate Republicans on the same page as their more ideologically obstreperous counterparts. (Boehner had faced the same problem.) He announced in 2018 that he would not run for re-election, leading to a fierce competition among House Republicans over who would replace him. The party would ultimately anoint McCarthy as their House leader — but only after losing control of the chamber in the 2018 midterms, which elevated Nancy Pelosi to the speaker's chair for a second time Democrats and left McCarthy in charge of a diminished GOP minority.

Since then McCarthy has proven to be a reliable sycophant for President Trump, from defending the president's attempts to obstruct justice and his abuses of power to build a border wall to openly bragging about patronizing one of Trump's hotels, an ethically dubious statement for a member of the congressional leadership. Yet McCarthy's acid test may have come earlier this year, when Trump spent two months repeatedly lying about the seriousness of the coronavirus pandemic and s suggesting it was all a plot by his political opponents.

McCarthy hasn't budged an inch from the president's side. He refused to stand up to Trump when he denied the seriousness of the outbreak, thereby allowing two months to pass in which measures could have been taken to address it. He followed the president's racist lead in publicly referred to COVID-19 as the "Chinese coronavirus," and has echoed Trump's belief in profits-over-people when it comes to the politics of his home state, blasting California Gov. Gavin Newsom for not consulting him before issuing a shelter-in-place order and arguing that "there was an ability to do this without shutting down the entire state."

It remains to be seen whether McCarthy's strategy will pay off. It's not likely Republicans can win back control of the House this year, but McCarthy's personal odds are somewhat better as he runs for re-election in California's 23rd district. His opponent, Air Force veteran and engineer Kim Mangone, will have an uphill battle in a solidly red district, where McCarthy has won at least 64% of the vote in the last four election cycles. Is he now more vulnerable as minority leader? Salon spoke with Mangone on Thursday.

Kevin McCarthy referred to the virus as "the Chinese coronavirus." Do you consider that to be racist?

Yes, I do. I certainly do. That is an absolutely ridiculous statement. It is a disease that we need to chase down, not assign a racist handle to it. That's ridiculous.

Are you planning on making that a central theme of your campaign, calling out his racism?

Yes. His racism, his lack of caring about any of the people in his district. There are so many things but, yes, that is one of them.  The fact that he keeps voting against health care for the people in his district. He voted against H.R. 3, for lowering prescription drug costs. There are so many things that I'll be running against him, but racism is definitely one of them. The comments he's made and his total support for [Trump against] the people that are fleeing their nations in South America trying to get refugee status, and instead of figuring out and trying to help the situation, they want to stand around and make racist comments about it. And caged children, yes.

How do you feel about how McCarthy and Trump have responded to the coronavirus pandemic, in terms of the economic packages that they've supported?

McCarthy started out — when the Democratic coalition said, we've got to put together an economic package together, the first thing he did was start making comments saying he wasn't going to sign it. That was his first response, no matter what they put together or what was needed, he was going to vote against it. He didn't support it until somebody finally convinced Trump that, yes, we do have a pandemic, and then he got behind it. But before that, he supported Trump when he was saying it was a hoax. He supported Trump when it was, "We don't need to do anything; we need to go back to work." He's supported him on all those stances, and I completely disagree with it. Their handling of it has been completely irresponsible and it has not taken into consideration any of the actual people living in this country.

How do you feel they've handled the situation in terms of medically containing the pandemic?

Do you believe that McCarthy deserves blame for not standing up to Trump early on when he misled people about the severity of the virus?

Earlier this month McCarthy appeared on Sean Hannity's Fox News show and said he felt that Gov. Newsom should have consulted local leaders and other lawmakers before announcing his stay-at-home order. He said, "Maybe he feels there's a need behind it. We do think there was an ability to do this without shutting down the entire state." How do you respond to that comment?

I think that that was a self-serving comment and was ridiculous. The governor does not need to consult with McCarthy about what he's doing within the state. That is between him and the other state leaders, the State Assembly, the State Senate. As far as shutting it down, Gavin Newsom did coordinate and talk with experts in the field. So when McCarthy got up there on Fox News and said, "Oh he should have done all this ..." Well, that was already done.

I'd like to now pivot to the stimulus package. Republicans have accused Nancy Pelosi and the House Democrats of essentially putting too much pork in the package. What do you say to those criticisms? What are your thoughts about what should be done to put country over party at this time in our history?

Where they accused Nancy Pelosi and the Democrats of putting pork, I guess that they consider the workers in this country "pork," because that's who they were really insisting upon helping. I fully support that, big business is not who we should be supporting, it is the people that are going to lose their homes, that are going to be kicked out from eviction because they're not getting a paycheck. That's who we need to focus on.

How are the people doing in your district?

It's about the same as everywhere else. Everybody's doing the self-quarantining. People are looking for paychecks, they're not getting paychecks. I know that small business owners are hurting because they're still having to pay rent even though they're not getting any income. So of course they're telling their people "Don't show up because I've got to pay rent even though I don't have money so I'm not going to pay you." So I'll be really happy once the checks actually start getting released to the people that need them.

Let's talk about the strategic question. How do you expect to do better than the other Democrats who have run against McCarthy in the past?

One is getting out my message. I am running on issues. There's a lot of issues this time around that I can run on because there's so many things that he has voted against like health care and the prescription drug costs, getting those under control. He's voted against just bill after bill after bill. He's supporting reducing benefits for Social Security. He's not doing anything to get jobs brought into his district. It's issue after issue after issue that I'm going after the people and addressing them.

I'm also running one of the best campaigns out there as far as fundraising and making sure that I can get the message out there. I've got a lot of supporters. I have over 3,000 supporters averaging $25 a contribution. So it's a grassroots campaign, and it's a little more challenging right now in that I'm going to have to be doing electronic town halls or online town halls and making a lot more phone calls as well as getting out mailers to people. But we're going to work very hard to make sure that everybody gets the message that I'm running on the issues and I want to help the people.

Why do you think McCarthy has aligned himself so closely with Trump on these issues?

I don't know why he does it. I mean, I don't understand how the man looks at himself in the mirror every day. When you're caging children, and apparently gleefully since they continue to do it, the rhetoric against "Oh we don't need to test," and supporting them on issue after issue after issue rather than saying, what's the best thing for the people who he's supposed to be representing? I mean, the House of Representatives represents the people and he's not doing that. Instead, he's just being a sycophant to Trump.