"From where we sit, it is obvious that this is a growing scandal" 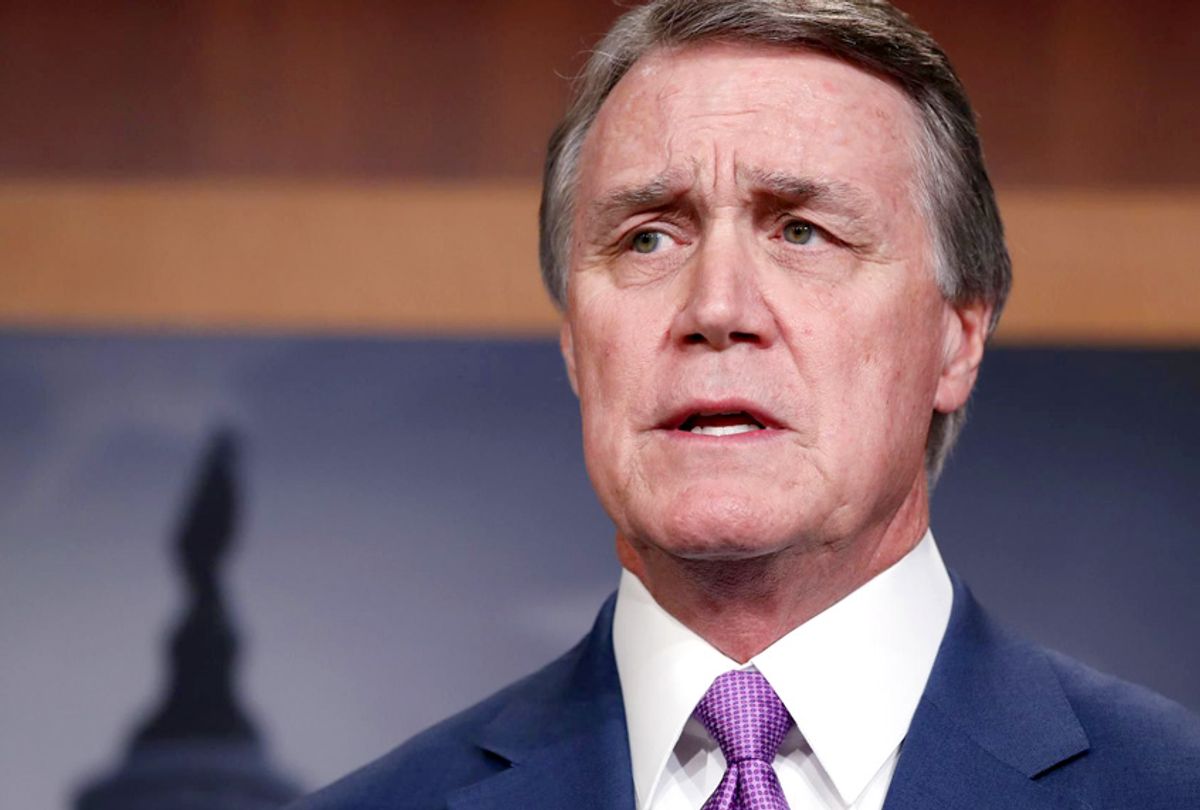 The investments of another Republican senator has come under scrutiny after it was revealed that Sen. David Perdue of Georgia purchased stock in a company that manufactures personal protective equipment (PPE) on the same day as a non-public Senate briefing on the coronavirus pandemic.

Sen. David Perdue of Georgia bought as much as $65,000 shares of stock in a company called DuPont de Nemours, which produces PPE like gloves, gowns and masks, the Atlanta Journal-Constitution reported. The transaction took place on Jan. 24, which was the same day the Senate held a members-only briefing on the pandemic. Perdue reported 10 different purchases in DuPont stock, amounting to an investment of up to $185,000, through March 2, according to a financial disclosure report.

The senator also invested up to $50,000 in Netflix, an entertainment streaming provider which has seen its business increase as more people find themselves suddenly at home, and sold shares in Caesar Entertainment, a casino company which has taken a hit amid the pandemic.

At the same time, Perdue sold nearly $400,000 in shares of Kroger, a grocery store chain that has seen a boom in demand during the pandemic and invested as much as $75,000 in the retailer Urban Outfitter, even though it had to close all of its stores.

"Since coming to the U.S. Senate in 2015, Sen. Perdue has always had an outside adviser managing his personal finances, and he is not involved in day-to-day decisions," Perdue's spokeswoman, Cherie Gillan, told the Journal-Constitution. "For the past five years, the senator has fully complied with federal law and all Senate ethics requirements."

Perdue is not the first Republican senator to face questions about his trading activity. Sen. Richard Burr of North Carolina unloaded as much as $1.7 million in stocks from industries that would be impacted by the pandemic after being privately briefed about the crisis. At the same time, he publicly reassured Americans about the looming health crisis. Burr's office admitted last month that it has been contacted by the Federal Bureau of Investigation (FBI), which is coordinating its probe the Securities and Exchange Commission (SEC).

Perdue's Georgia colleague, Republican Sen. Kelly Loeffler, has also faced allegations of insider trading. Along with her husband, Loeffler purchased stocks in DuPont, which manufactures COVID-19 protective garments, and in a telecom company called Citrix, both of which have profited during the pandemic due to an increased need for safety equipment and clothing and an uptick in telecommuting. She has since announced that she is liquidating her individual stock holdings.

"From where we sit, it is obvious that this is a growing scandal and information about questionable stock trades is going to keep trickling in," Donald Sherman, deputy director at the watchdog Citizens for Responsibility and Ethics in Washington, told Salon on Wednesday. "That's why when we filed our complaint against Sens. Loeffler and Burr with the Senate Ethics Committee, we also asked them to investigate any other senators that got a private briefing before making some of these sales so that we don't have to keep filing complaints."

He added, "What is interesting here is that Sen. Perdue claims that he followed all relevant Senate ethics rules and laws, and I hope that the Senate Ethics Committee will look into that. But I think it's also time to question whether the Senate Ethics regime is robust enough to deal with what is obviously a problem."

"Senator Burr's stock transactions raise more than a little suspicion," Tribe told Salon by email last month. "They have the whiff of insider trading and of betrayal of the public trust — not to mention the public's health. Let's hope the FBI-SEC investigation into the details is fair and thorough and keep our fingers crossed that it won't be a whitewash of the sort I wouldn't be surprised to see from our highly-partisan attorney general."