HBO's new comedy presents itself as an empowering, woman-centered affair that flips soon after leaving the station 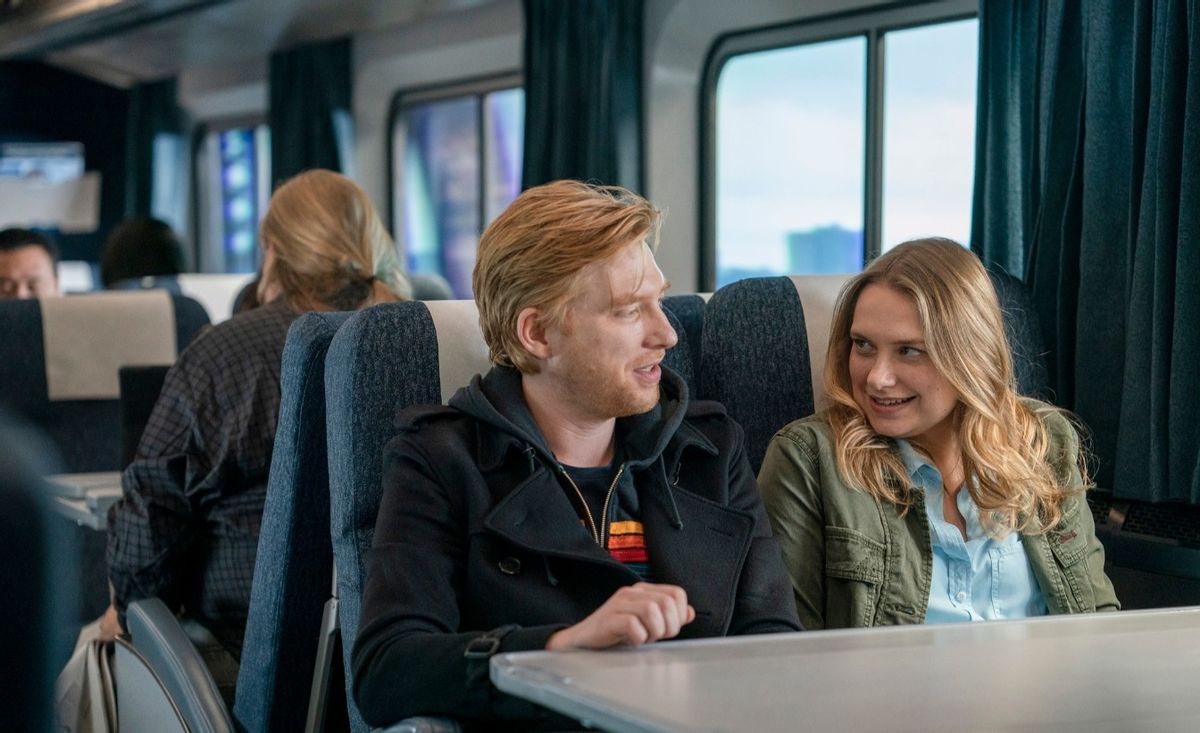 At first it's hard to know what to make of HBO's "Run" beyond the very little its ads reveal. Not even the opening moments give the viewer a clue of where the story is going to take her. The only clear detail is the blank misery Merritt Wever's housewife Ruby wears on her face while she's parked outside a mall of big box stores. The phone rings, and Ruby answers in the sort of high pitched, sing-song tone of faking it, the timbre a person adopts as she goes through the motions of life. The melody of false contentment.

Then Ruby's phone buzzes to notify her of a text. It reads, "RUN."

Her expression changes, coming alive with a flicker of daring. A few instants later, she decides. Yes, she will "RUN." She confirms this by texting this in reply.

What this means and the consequences of that split-second decision make Vicky Jones' series an emotional shapeshifter, constantly defying expectations as to where Ruby's adventure will take her and, the further into her journey she goes, who she can trust.

"Run" is a work that proves more surprising, shocking, seductive, funny and powerful the less you know about it, but it earns it trust from the top of the series through Wever's unwavering performance and her chemistry with Domhnall Gleeson as Billy Johnson, the man on the other end of that text. Billy and Ruby have a past, you see, and part of that history involved a pact.

For whatever reason, if one texts "RUN" to the other, and the other echoes the same back at them, they'd drop whatever they're doing, meet in New York City and take a voyage by train to the other side of the country together. Youthful, heady romance gives life to contracts like this, and most of them are forgotten in the fog of time and life changes.

And Ruby is a woman whose every need is met, at the cost of her early ambition and independence. Thus the spur-of-the-moment, cross-country train ride with a past boyfriend who has built a life for himself in the decade-and-a-half they've been apart, very much in the vein of Richard Linklater's charming "Before" trilogy of films.

Only…"Run" is not quite a romance, or a straight comedy. It's a psychological and emotional shapeshifter. The first two of the five episodes provided for review tantalize the audience in all the usual ways: Ruby is following her heart, but is beset by the expected insecurities a woman might have if she's meeting an old lover for the first time since they were both young.

Billy, who has found success and fame as a life coach and guru, appears to be running from something. Do they still find each other attractive? Do they want one another? Should they share a bed?

Such concerns and the accompanying tugs on Ruby's and Billy's separate consciences soon become the least of their problems.

To provide a hint at what kind of comedy we're dealing with in "Run," note its pedigree. Jones frequently collaborates with "Fleabag" creator Phoebe Waller-Bridge, and the pair co-founded DryWrite Theatre Company. Jones directed Waller-Bridge in the stage version of "Fleabag" in addition to writing her own plays.  She also worked in the writers' room for "Killing Eve," which also returns for a new season this weekend on BBC America. (Waller-Bridge, by the way, has a brief cameo in "Run.")

And "Run" emulates the structural and tonal styles of those other shows by cleverly withholding vital details from us, and from Ruby, until each one comes out and absolutely changes everything. In this respect Jones' writers take every rosy predilection typically assigned to the female romantic lead and expediently skewers it, veering expectations off course and changing how we feel about these two people and their choices to overturn their lives for one wild ride.

No curve or kink in Billy and Ruby's haphazard journey comes off as manufactured, either. Each makes a point about fantasy crashing into reality, about the scenes in heads never matching what actually happens. When a person drops every responsibility in their lives to flee into the unknown, what can go wrong except for … everything?

"Run" coaxes forth a consistent level of engagement and spark thanks to Wever's and Gleeson's close-quarters work. Wever is an actor who knows how to wear a woman's story on her face, a trait the directors play to by way of numerous close-ups.

Gleeson, in contrast, channels a halo of harmlessness that somehow feels off, almost similar to the persona he plied in "Ex Machina." There's a coolness behind his lovelorn declarations that comes from a different place than the desperation one assumes urged Billy to send that text.

Along with Waller-Bridge, "Run" also provides an invigorating and unexpected appearance by Archie Panjabi, the would-be completion to the romantic film ensemble as a woman who drops into Ruby's life and encourages her spontaneity, because isn't that how women are supposed to empower one another?

"Run" isn't a constant pulse-pounder. In the way of a skilled seduction artist, the action builds slowly and gently, ramping up speed as Billy and Ruby's impulsive leaps tangle with their real lives. The first two episodes are appropriately titled "Run" and "Kiss." By the time episode three ("F*ck") comes around, the series' destination is no longer clear, even though this train is supposed to take the duo from New York to Los Angeles.

The train setting leads the viewer to assume a specific intimacy, hence the romance of the cross-country expedition. Executed poorly, though, that setting can feel stifling. But through the direction of Kate Dennis, who helms the first four episodes that take place on train cars, the interiors never seem limiting or closed.

When the series swoons into the romantic tension between Ruby and Billy, the interiors feel like an embrace. When the air shifts, the cars become a maze. The engine runs with smooth confidence all the while, allowing us to relax into this excursion, satisfied to be in the dark as to where it's taking us but assured that Jones and the actors are firmly in control.