Plus, late-night hosts' transition to at-home programming is warm, charming, and highlights their true skill 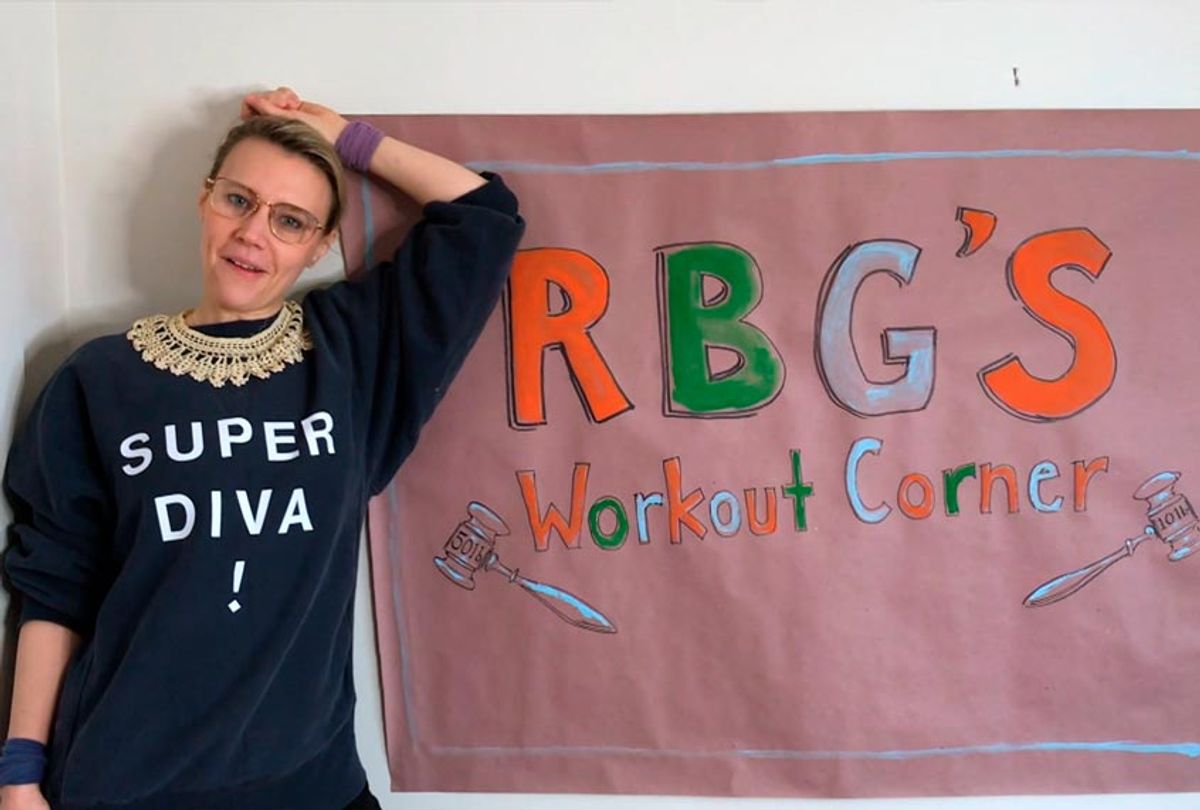 When NBC first announced the return of "Saturday Night Live" with a new episode last week, a reasonable person must have wondered how that was going to happen. New York City is in lock down; its COVID-19 death toll is astounding. "Live" in this context is but a nod to a title, a manner of speaking as opposed a guarantee of barely filtered, fly-by-the-pantseat performance.

The mechanics of pulling it off probably weren't a mystery. Online platforms facilitating or approximating face-to-face contact are legion these days. Instead the heart of the question has to do with the success of replicating the energy of the live performance in the virtual space. These are performers who feed off of the audience's laughter, the give-and-take of applause or extended, rolling waves of giggles.

"Telling jokes with nobody just looks like hostage footage," quipped "Weekend Update" anchor Michael Che, who enlisted an unidentified group of people to listen in on their social distance edition of headline-driven comedy staple. He and Colin Jost did as fine a job as they ever did, and it would have worked as well without the Zoom listeners as it did with their occasionally audible laughs.

Every member of the "Saturday Night Live" cast similarly acquitted themselves well, whether by calling upon the familiarity of established characters such as Kate McKinnon's time-honored spoof of Ruth Bader Ginsburg (seen sharing her version of the Supreme Court justice's notoriously punishing workout) or the special appearance of Heidi Gardner's teen movie critic Bailey Gismert, only in her native space. That is, on YouTube as opposed to the "Weekend Update" desk.

"Saturday Night Live" has been inadvertently prepping for this eventuality by treating sketches like viral videos as opposed to classic stage bits. The Lonely Island team (Andy Samberg, Jorma Taccone and Akiva Schaffer) perfected its delivery, and here the cast's regular dives into that architecture pays off. Audiences love those bits, whether they're in the house when they first see them or at a desk.

Internet culture is vast, varied and ripe to be spoofed, as is the emerging online workplace environment being formed and refined as we journey further in to the social distancing era. But what's struck many of us in this new age is the fresh level of silence that's been unmasked by our widespread quarantine.

Some people find it unnerving, all the quiet on streets and highways that are suddenly free and open due to the plummet in daily auto usage. In the live comedy space, silence tends to be equated with failure. Comedians call it dying. On "SNL," silence in the studio during a sketch feels as awful to the audience at home as it must to the performers.

Taking the sketches and stars out of the studio removes that test and tension, and that could have killed every bit. But what do you know? It didn't. Instead, the first and perhaps only "Saturday Night Live at Home" feels warmer, brighter, and looser than the classic version we've been used to experiencing for 45 seasons.

This distanced edition of  "SNL" follows in the path of late night talk show hosts who returned to the air more or less en masse at the end of March without audiences or laugh tracks or even the possibility of proximal ribbing from the writers and performers they work with. The audience's absence can't be ignored, but neither can it pad the success or failure of a joke.

In awareness of that net's disappearance, each host has approached the challenge of distanced delivery slightly differently but, to a man and woman, they've found ways to tailor the experience to their individual style and strong points.

"Last Week Tonight with John Oliver" and "The Late Show with Stephen Colbert" are about as polished as they ever were, thanks to a visible effort on the part of their respective crews to replicate the in studio production values as closely as possible in their homes. "Last Week Tonight" retains its shape, structure and edge, and the freewheeling lunacy Oliver's digressive rants and sly digs are somehow augmented by the lack of in-house laughter to punctuate them. The jokes may be denuded but what's underneath the clothing of laughter, we see, is more or less all muscle.

In a recent monologue criticizing the White House's willful lack of preparedness to confront the pandemic, Colbert revealed that he and his crew began preparing the show's quarantine contingency plan at the end of February. That explains why his home version of CBS' "The Late Show" resembles an old school public affairs interview series that happens to be helmed by one of the quickest minds in topical comedy.

NBC's hosts Jimmy Fallon and Seth Meyers have adopted a handmade feel with tremendous success. Each of their shows are decidedly and intentionally low-tech, drawing the audience closer somehow. Meyers has always plied his "Late Night" humor with a combination of velocity, precision, and casual kindliness, enabling his audience to laugh along with him as he figured out how to do this show from his house. Now, his surroundings are part of the joke. He takes time to reference a lamp in the background that he claims Martha Stewart hates, and gives prominence to a decorative stack of books that includes, very defiantly, a large hardcover copy of 1977 best settler "The Thorn Birds."

But of the two, Fallon's shift from flailing host of "The Tonight Show" to a figure of reassurance, helped along by his two daughters' charisma and his wife's supportive good humor, has become the live TV comedy story to watch. Topical talk is a space still owned by the people who can help us process the madness of politics, but in his reclaimed farmhouse, Fallon's insistence on keeping the tone light and playful acts as an exhaled relief on the behalf of a hyperventilating nation.

Over on ABC, Jimmy Kimmel's at home production of "Live!" lands squarely between the pro-as-amateur feel of NBC's hosts and Colbert and Oliver's pro-home studios on CBS and HBO. It opens with his child's drawings and her singsong version of his theme song and films in what looks like a rec room he inherited from some great aunt who was overly fond of florals. Kimmel cracks wise without dropping a stitch; he's comfortable, we're comfortable. Everyone can sink a little deeper into the couch.

And that feeling guides the April 11 edition of "Saturday Night Live" from the moment Tom Hanks pops in to prove to us that yes, he's alive, standing and still gently funny. Hanks was more of a cameo headliner than host, since the sketches themselves were performed by the main cast. Larry David popped into to do his Bernie Sanders imitation and mark the Democratic candidate's withdrawal from the presidential race, and the voice of Alec Baldwin rang into "Weekend Update" to turn in a Trump impression.

All told, though, this episode was lighter on the celebrity cameos and thicker with creativity.  In taking this approach the show reminds us of why McKinnon, Aidy Bryant, Kenan Thompson, and Beck Bennett are this ensemble's star hitters. They can make any situation work, even via devices streaming from their private spaces.

It also plays to the strengths of featured players such as Chloe Fineman, whose talent with celebrity impressions came in handy in the show's spoof of the online MasterClass series. (Her version offers lessons from an eerily accurate approximation of Timothée Chalamet, YouTube influencer and living doll JoJo Siwa, and "Tiger King" star Carole Baskin, offering bicycling tutorials and insisting she didn't kill her second husband.)

Nobody's blowing it, in other words. None of it feels, as Che jokes, like hostage footage. Instead these shows provide quieter and honest reassurance. The jokes land a little more softly, but they do land.

Too bad we're not getting another "Saturday Night Live at Home" edition this week, although the hiatus is understandable. The last new episode prior to the April 11 edition aired on March 7, and even if we were in normal times, there would only be a few more episodes left for the season, which usually ends in May.

Broadcast's main late night hosts Fallon, Kimmel and Colbert are coming together this weekend to share hosting duties for the "One World: Together at Home" telecast in honor of healthcare workers and created to raise funds for the World Health Organization's COVID-19 Solidarity Response Fund. The telecast airs on from 8 p.m. to 10 p.m. ET on ABC, CBS, NBC, NatGeo and Univision.

It's also available via livestream starting at 2 p.m. ET on Twitter, Instagram, YouTube, Facebook, Amazon Prime Video and Twitch. And in addition to the hosts of "Jimmy Kimmel Live!," "The Tonight Show" and "The Late Show" joining forces, the concert features a very long list of performers curated by Lady Gaga. Presumably the audience will number in the millions, and most of us won't be able to see or hear one another's responses to the event.

But as we've seen so far, the absence of that production detail doesn't prevent us from connecting with the core of the entertainment. Don't get us wrong – applause is grand. It's the heartbeat of live-and-in-person show business. The moment we get it back, for real, will be a sign that we're on our way to the other side of a frightening stretch of history. For now, though, the quiet grants us space to breathe, to listen and appreciate an honest-to-goodness well-earned laugh.