How musicians are moving their gigs online during quarantine 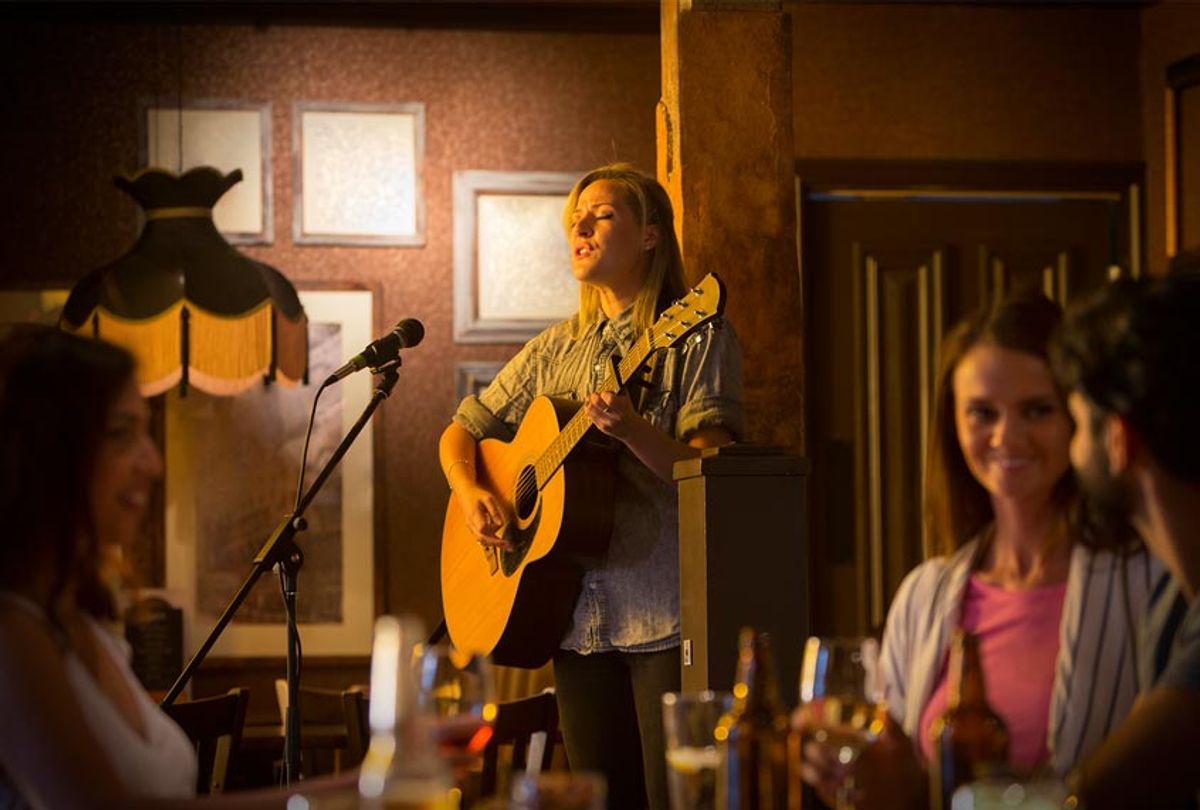 A young woman sings and plays her guitar in a pub. (Getty Images)
--

On March 11th – just as many cities around the country were preparing for crowded holiday parades, Catholic masses and bar crawls on the 17th — the World Health Organization declared that the novel coronavirus should be classified as a pandemic. Public discourse steadily shifted from celebration to social isolation and suddenly live shows weren't on anyone's mind.

A few days later, the Kentucky Derby, a festive May event that draws a vast and eclectic crowd, was postponed until September — another big hit to the Louisville-based musician.

"Between St. Patrick's week parties and the Kentucky Derby, that was thousands of dollars lost right away," Kaelin said. "The majority of my income has always been from playing corporate events, house concerts, or private parties . . . The financial hit has been immense."

Amid the current pandemic, celebrity musicians like Lizzo, John Legend and Brandi Carlile have made headlines for performing live and streaming it online from their homes during quarantine. But for musicians all around the country who rely on local events and gigs to make ends meet, the stay-at-home orders have been financially devastating.

Many, like Kaelin, are trying to use social media and streaming to adapt, too, but it's not necessarily super profitable. She did her first Facebook Live show on March 13.

"Facebook seems to be the best platform for actually connecting with people and getting tips," Kaelin said. "Though I've discovered you really only get tips if you are either constantly begging for them, or if another person comments on your feed with your Venmo."

She has started doing that for other artists she knows are performing live shows online.

"It's an easy way to help another artist out," she said. "It's easier to promote someone else's music than my own!"

For Louie Hehman, a South Carolina-based pianist and jazz musician, this time of year — March through May — is typically his busy season.

"These are often dinner parties, wedding cocktail hours, donor receptions, and the like, plus restaurants and bars," Hehman said. "There is so much going on, I can count on a big gig almost every weekend, and that helps to offset the 'slow season' of January, February. . . .  I've had, by my count, about a half dozen of those high-paying engagements that have had to be canceled."

Hehman is used to only having one or two of those events being canceled or postponed each month.  "But when it's all at once, it really adds up," he said.

Hehman often plays with other people, so concerts have been more difficult to adapt to a virtual space.

"I was able to get in one really great virtual gig with two other jazz players, but that was almost too late; it was literally the day before the stay-at-home order went into effect,"  Hehman said. "We used Facebook to set up that livestream, and the bass player posted his Venmo info in the comments. We had a lot of comments, and people sent virtual tips, but with the stay-at-home order, I obviously can't play with them again."

Currently, he's putting together a "virtual recital" of classical repertoire, which he'll probably stream via Facebook once it's all together at the end of the month. Additionally, he's benefiting from from a position at his church, which has also had to make the transition to virtual experiences.

"As a pianist, I'm lucky that I've still got some money coming in through my church job, as the pastor has decided to livestream some weekend Masses," he said. "That consistency has really made a huge difference."

An online avenue that has provided more consistency amid social distancing for musicians is teaching; both Kaelin and Hehman have moved their in-person music lessons online. Hehman teaches through a local university, so he and his students had a lot of technical support for the switch and while there are some obvious challenges – he can't guide students' hands while they play or do duets with them due to the inevitable video conferencing delay – the transition has been pretty seamless.

"My younger students, who are surrounded by screens almost constantly, are actually more focused in their online lessons than they are in their regular lessons," Hehman said. "They are more attentive and responsive to my suggestions, which may be worrisome in the long-term, but for now I'll take it."

Another benefit is that he's created a lot of video content in the past few weeks to share with his students at all levels, meaning that he now has a library of supplementary material for the future, something he never had before.

Kaelin had done some online teaching before, but where she used to only use Skype or FaceTime to teach, she's now expanded to use different platforms.

"I like Zoom because it allows me to do group classes," she said. "Obviously it's not the same as in person, but it does allow you to be more flexible with scheduling. I used to schedule back to back with zero wiggle room because I was renting a studio."

She's also seen a lot of people who were skeptical of using video conferencing technology to embrace the practice pretty quickly, prompted by social isolation.

"I'm hearing from people who want to do online lessons who previously would never have considered it," Kaelin said.

Both musicians also point to regional arts institutions that have stepped up to support indie musicians' transition to performing exclusively online. For example, the Kentucky Performing Arts partnered with Brown-Forman, which was a title sponsor for some of the venue's events that had been canceled, to present daily livestream shows.

"They pay artists a small fee to play a 30-minute set, which is great, but even more helpful is that they do promotion for the shows," Kaelin said. "They share on various Facebook groups and pages – pages that have a lot more followers than the musicians they are hiring – and encourage the viewers to tip the artists during the show. It's a really great show of support."

Hehman points to ColaJazz in Columbia, S.C., which organized a virtual bar crawl, using that as a platform for amplifying local musicians' performances.

"The local music scene is an enormous part of what makes a city unique," he said. "Without local artists, the culture that makes each city what it is just wouldn't exist. So, while I don't know exactly what else venues could do at this exact moment, I'm grateful to all the organizations and individuals who have really stepped up during this time."