Work-sharing, an alternative to layoffs, is well-funded but poorly publicized

The CARES Act provides money for a novel means of avoiding layoffs. But few employers have taken them up on it 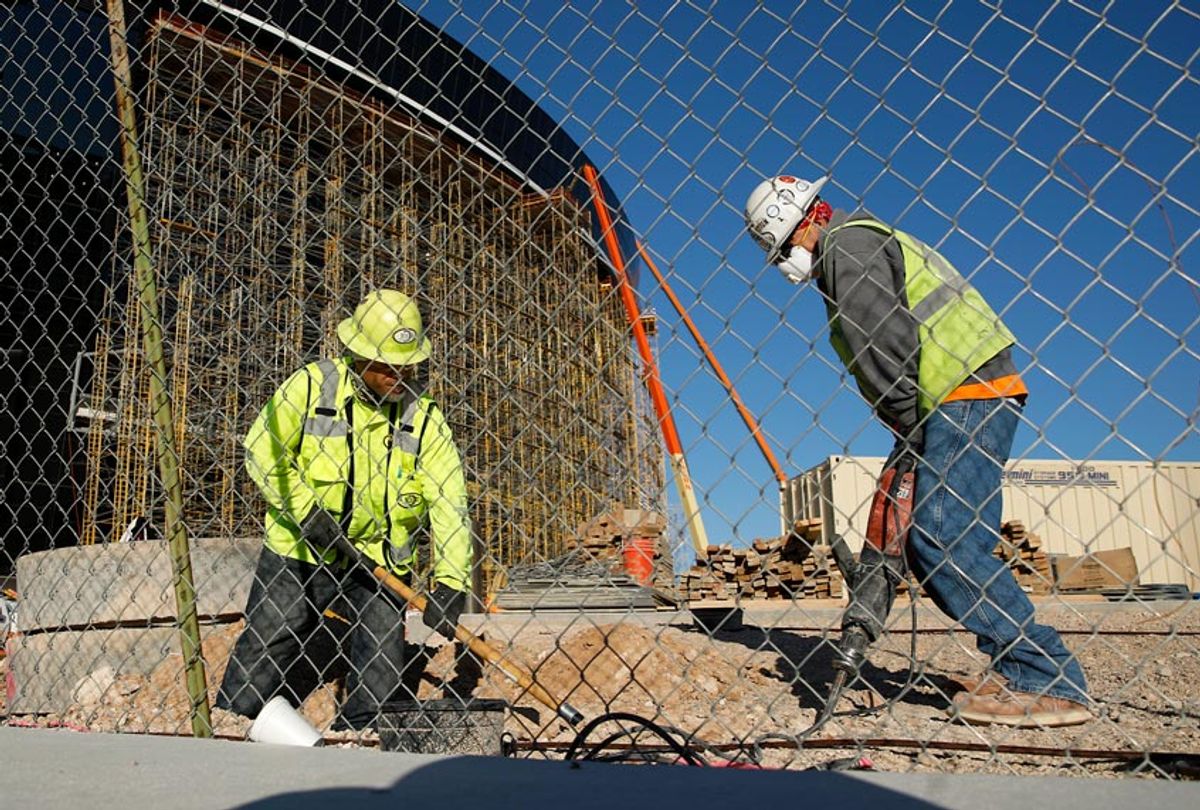 A concept known as "work sharing," which former Federal Reserve Chairman Ben Bernanke endorsed as a temporary solution, is being explored and debated, primarily in the form of short term compensation (STC) state programs. What is work sharing, you might ask? In place now in 29 states, these programs date back to before the Great Recession of 2008, and are designed to spread job losses over time and among workers. STC allows employees to keep their jobs, working fewer hours while collecting unemployment benefits proportionate to the hours lost. Hence, an employee who once worked full-time might become a 30-hour a week part-timer, and their lost income would be supplemented by unemployment benefits equal to the 10 hours per week of work lost. That means that employers can keep everyone on the payroll working fewer hours per week, and employees make up their lost hours with unemployment checks.

Unlike layoffs, employers have more flexibility with work sharing to cut payrolls while maintaining a stable work force, retaining skilled employees, and reducing recruitment and training costs. Businesses are able to close and open as needed, easing transition back to normal conditions.

Previously, most STC programs have involved cutting the workweek, from five days to four for example. But these kinds of programs can work over any period of time: companies that have closed for the coronavirus crisis may reopen after two or more weeks (or any other combination of openings and closings), their employees receiving prorated state benefits as well as $600 a week from the feds (under the provisions of the March 27th Coronavirus Aid, Relief, and Economic Security [CARES] Act).

Section 2108 of the CARES Act loosens existing restrictions on STC programs while  providing 100 percent federal funding to existing state STC programs. It also provides $100 million for states without STCs to start up work-sharing programs, covering 50 percent of the benefits.

So far, however, enrollments have been disappointing. States with existing programs (with the exception of Texas) have been slow to publice; states without have been slow to adopt them — conditions that should change as the crisis drags on and word gets out.

It may well be, however, that the economy is facing a new normal — chronic double-digit unemployment. While most economists hope for a strong recovery in the third quarter, others are not sure, fearing a "very prolonged recession,"  even a "long scarring depression." Gavyn Davies of the Financial Times warns, "do not count on a fast global economy bounceback."

Bernanke has offered only cold comfort, observing: "Unemployment is going to be high," but "the duration . . . [is] likely to be shorter than the 12 years of the Great Depression."

Complicating a drawn-out recovery, experts are predicting the advent of a work-less world, the result of new technologies (drones, self-driving vehicles) rapidly coming on line. In a recent cover story, The Atlantic envisions a "work without work" on the horizon.

If history is a guide, chronically high unemployment will propel long-term work sharing  to prominence. France's 35 hour workweek law, for example, may become a model for the US — and an issue for the upcoming presidential election. Passed in 2000, the law was designed to share the available work after other unemployment remedies — government stimuluses and economic growth — had failed. Even though amended and weakened subsequently, the law was effective and still attracts passionate defenders.

During the Great Recession of 2008, Germany, Austria, Belgium and the Netherlands successfully implemented work sharing as an alternative to layoffs. Japan, Turkey, and Uruguay followed suit.

An AFL-CIO Commission on The Future of Work and Unions, meeting last September and, anticipating the coming wave of job killing technologies, stressed the need for work-sharing policy initiatives. According to the commission, the key question raised by the new technologies is how the time that is being freed by technology is distributed—as Henry Ford once observed, "free time will come, the only choice is unemployment or leisure." In order to share the "leisure dividend," the commission recommended collective bargaining and enacting legislation for a four-day workweek, increased overtime payments (some are suggesting triple-time pay), earlier retirement, more paid holidays and longer vacations, together with guards against pay reductions.

As the coronavirus pandemic drags on and the presidential race heats up, such policy proposals may also emerge as issues. There is ample historical precedent.

As Great Depression began, long-term work sharing took and held the political main stage until 1938. Early on, it was a bipartisan issue. Herbert Hoover, as well as Franklin Delano Roosevelt, encouraged voluntary business efforts, such as Kellogg's and Goodyear's six-hour days—Hoover's secretary of labor, William Doak, observed that "industry, in general, favored" these efforts. Both parties endorsed work sharing in their platforms during the presidential campaign of 1932.

After Roosevelt was elected, policy measures similar to those recently endorsed by the AFL-CIO Commission took the forms of centrally important pieces of legislation: the Black/Connery thirty-hour workweek bill, which nearly became law in 1933, and early work-sharing versions of social security that provided retirement for people in their mid-50s.

However, in a watershed moment in US history, Roosevelt rejected long-term work sharing in 1935 in favor of "Full Time," Full Employment (at forty hours a week, or more), committing government to replace work lost to technology by whatever means necessary: liberal treasury policy, public works, deficit spending, and stimulus and relief payments. These unemployment measures have effectively eclipsed LTWS since then.

Subsequently, when unemployment has reared its head in the US and LTWS measures reappear, they are rejected in favor of "Full Time," Full Employment—even temporary (STC) efforts remain suspect.

It may well be that this familiar pattern will be repeated in the present crisis. However, it is entirely reasonable to question whether the massive debt and spending needed to sustain "Full Time," Full Employment can be sustained indefinitely. Arguably, we have reached the point of diminishing returns.

It may well be, with 20 percent of the workforce unemployed, the work-sharing policies recommended by the AFL-CIO Commission will find political support during this election cycle comparable to the depression years. It is also conceivable that Hoover's brand of work sharing in the private sector will gain traction.

Serving as a model for businesses today, Volkswagen instituted a four-day, 28.8 hour week in 1993 as an alternative to laying off 30% of its workers. The German Government supported the effort with tax breaks (monies offset by reduced unemployment payments), while the company increased wages and benefits enough to share some of the cost of the work sharing with employees.

Serving as models as well are innovative US companies such as Kellogg's in Battle Creeks, whose six-hour day lasted until 1986, and Metro Plastics in Noblesville, Indiana. Metro put the thirty hour-week in place years ago and found a responsive labor force in the community — individuals for whom thirty hours are tailor-made.

In the long run, however, chronic unemployment will require a long term, market-based work-sharing solution.

Joe Pine and James Gilmore point to the ongoing natural evolution of the economy; a developmental process in which newer stages evolve from older ones — the former outpacing the latter in terms of innovation, value creation, and market share. Historically, commodities have given way to manufacturing, which has given way to retail and service industries.

Together with those preparing for a work-less world, Pine and Gilmore agree that new technologies are revolutionizing production and eliminating jobs in the existing three economic stages, retail and services in particular, making resources available for the development of two new stages: the experience and transformation economies.

They point out that the buying of experiences and transformations (the entertainment, health, and tourism industries are prime examples) now account for the lion's share of economic growth and job creation.

However, while the experience and transformation economies are now essential to avoid chronic unemployment, they require more time for customers to consume their intangible products, compared to the earlier stages.

By all accounts, time is the coin of the new stages. Consumers are, and will increasingly be, demanding more free time — opting for shorter work time arrangements. Value will migrate from the earlier stages to the newer ones increasingly in the form of time: a kind of market-driven, work sharing occurring.

With these developments, it is predictable that free time will reemerge from its historical dormancy as a normal good and be in greater demand in the marketplace, as it was during what I have called the century of shorter working hours.

Over the nearly 100 years preceding the Great Depression and FDR's (and so many others') attempts to sustain "Full Time" full employment, working hours were cut virtually in half, largely the result of individuals' free choices. Progress was widely seen as both higher wages for more of the good things in life, and shorter hours as more time to enjoy them.

The AFL-CIO Commission listed the benefits of work sharing; a fairer redistribution of work and wealth, sustainable growth, and community and "family-sustaining jobs."

More importantly, LTWS, as the product of government policies, private business initiatives, or through the evolution of the economy, may signal a changed direction for the economy — a return to realizing the original American dream of humane and moral progress beyond work and the marketplace.

This nearly forgotten dream once excited the imagination of scores of Americans such as Walt Whitman — many had great hopes for what he called "higher progress."

With work sharing, we may witness the rebirth of higher progress and the coming of a new age of experiences in which how to live free becomes a more important concern than making a living.

Benjamin Kline Hunnicutt, PhD, is a historian. He has been a professor at the University of Iowa since 1975. For most of his academic career, he has focused his research and writing on the historical mystery: "the end of shorter hours."  With writers such as Joseph Pieper and Hannah Arendt, he has also explored the “rise of the world of total work” — the unique modern glorification of work as a crypto-religion and the resulting trivialization of leisure that for centuries was progress’ ultimate destination. He is the author of several books, book chapters, and articles, including "Work Without End: Abandoning Shorter Hours for the Right to Work" (1987), "Kellogg's Six-Hour Day" (1995), "Free Time: The Forgotten American Dream" (2013), and "The Age of Experiences: Harnessing happiness to the New Economy" (2020).

Hunnicutt is a member of the Academy of Leisure Sciences and past co-director of the Society for the Reduction of Human Labor. Professor Hunnicutt received his MA and PhD in American History from the University of North Carolina, Chapel Hill.  He has served as chair of Leisure Studies and head of the Division of Physical Education at the University of Iowa. He has worked as a consultant to unions and businesses interested in shorter work hours and the potential of leisure to improve the community and workplace.

Hunnicutt has written for The Wall Street Journal, Politico, and the Huffington Press, and appeared in a variety of nationally and internationally broadcast television and radio programs including: ABC News, NBC News, the Canadian and British Broadcasting Corporations, the Today Show, the Charlie Rose Show, and appeared in the PBS special, “Running Out of Time.” Currently, he is working on a two volume history of work, tentatively entitled: "The Rise and Fall of Work" (the second volume subtitled, "Saving Work, A Failing Faith") and a trade, self-help book, "What to Buy To Make You Really Happy, And Then Some."