"The View" co-host Meghan McCain: "It's perfectly normal to me" to see armed protesters

Joy Behar had a different view of the gun-toting demonstrators of coronavirus restrictions: "Those are terrorists" 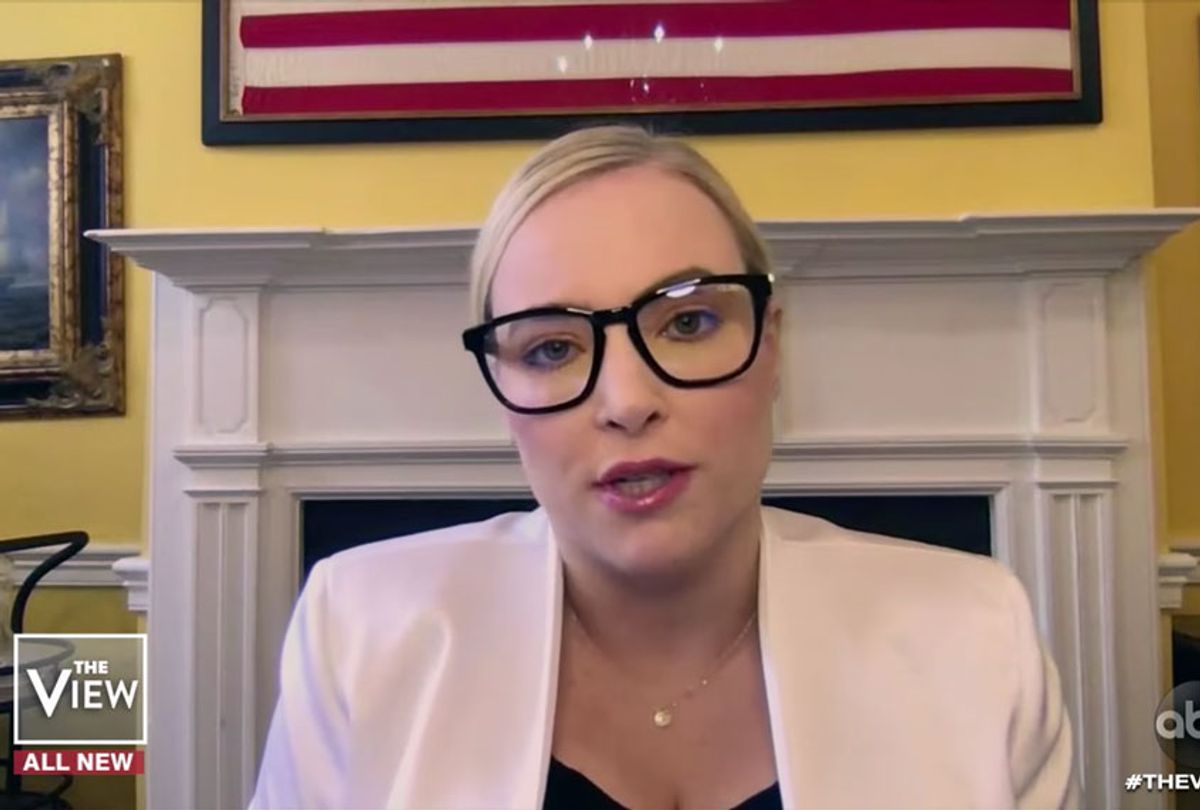 Meghan McCain on Monday defended far-right protesters who carried guns to social distancing protests, telling her fellow co-hosts of "The View" who think differently to "check" their "privilege."

Heavily featuring individuals on the fringes, the protests, which have spread to several states, resemble Tea Party demonstrations of nearly a decade ago. Many demonstrators waved Gadsden flags and handmade anti-government signs; some were flagrantly armed.

Co-host Joy Behar did not mince words in her description of the protestors, pointing out that they were encouraged by right-wing media personalities.

"Why are you bringing guns to a rally? You want to call yourselves protesters?" she asked. "Leave your guns home — those are terrorists who bring guns to rallies."

Though it "may seem violent" to some, McCain claimed that it was "perfectly normal" to see armed protesters demanding that governors bow to their will.

"I continue to be split on it. Because I see those kind of protesters with guns, and I understand that for a lot of people watching this show, that may seem very foreign, and it may seem violent," she said. "But it's perfectly normal to me, and it's perfectly legal in the states that they did it in and it's a culture symbol. Anyone bringing a gun to a rally is showing which side of the gun argument they're on, which is an argument that's being brought up in these types of protests."

McCain then urged her "gainfully employed" fellow co-hosts are currently working from home to "check our privilege."

"Nobody on this show has to worry about we're going to feed our family — if we're going to continue working. And there are a lot of people in our country who are in pain, who are out of work, who are losing their homes. And I think when people are scared and are in pain, they start to panic," she said. "And it doesn't look like there's any resolution to this coming on in the future."

Minnesota Gun Rights calls itself a "no compromise" gun rights group. It argues that the National Rifle Association is too liberal, and its website says the group's goal is "to hold politicians accountable and achieve maximum liberty for an individual to defend himself, his family and his property without having to ask government for permission to do so." (Goals for women were not similarly listed.)

In a display of collective cognitive dissonance, the protesters at the same time have embraced the approval of an executive who introduced coronavirus restrictions. President Donald Trump, who announced federal social distancing guidelines in mid-March, has repeatedly advised Americans in White House press briefings that they should heed state stay-at-home orders and emphatically delegated those authorities to governors.

"Every state is very different," the president said last Friday. "If they need to remain closed, we will allow them to do that."

But Trump at the same time has embraced the protests — "they seem to be protesters that like me," he has said — and appeared to allude to violence in a number of tweets, accusing Democratic governors of staging a mutiny against him and encouraging protesters to "LIBERATE" a number of states.

Nearly 97,000 people by Sunday joined the Facebook group "Wisconsinites Against Excessive Quarantine," which accuses Democratic Gov. Tony Evers of "controlling our lives" and "forcing us to hand over our freedoms and our livelihood!" The virus has killed more than 220 individuals in the state.

"I understand the anger and pain," McCain said in reference to the state restrictions — not the pandemic which has killed more than 41,000 Americans since March 26. "I do think there has to be some kind of balance with this."

Behar invoked Patrick Henry to offer a differing take on the protesters.

"Give me liberty and give me death is what they're basically proposing," she said. "Because a lot of people are going to die because of this behavior."