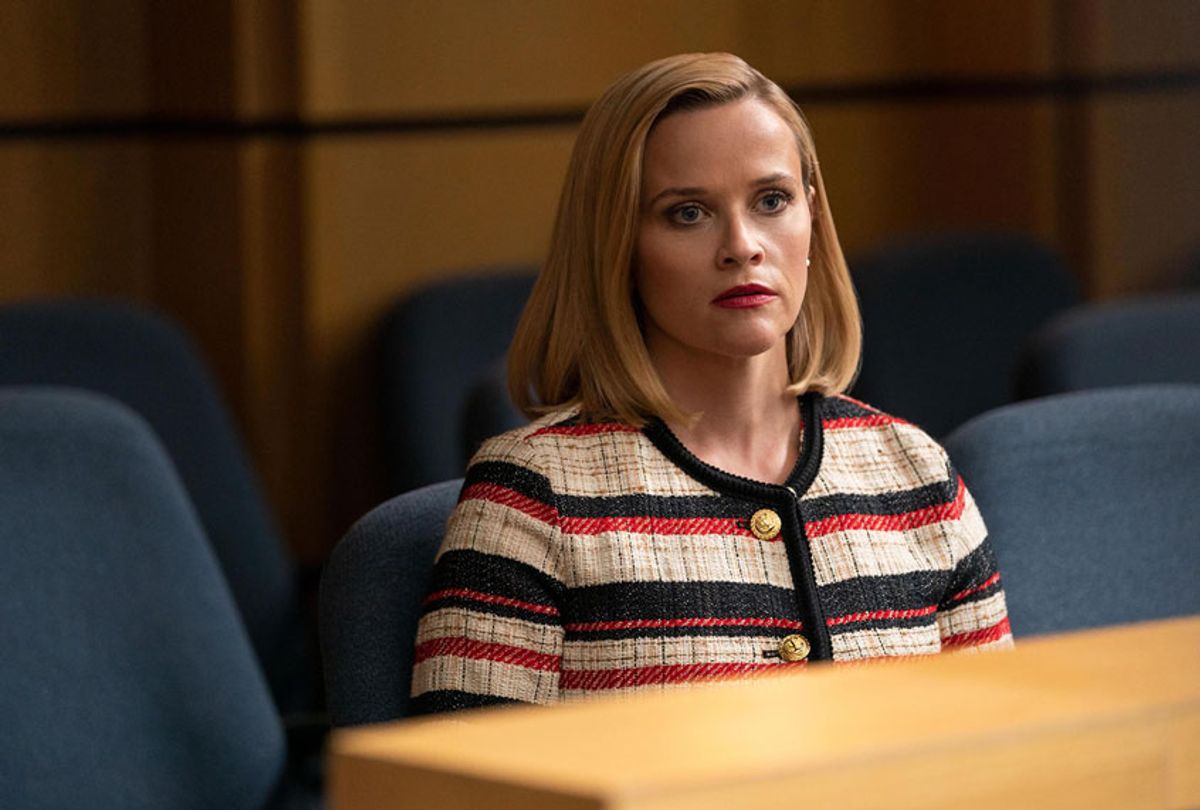 The following contains details from the seasonfinale of Hulu's "Little Fires Everywhere." If you haven't watched it yet, stop reading now unless you want to be spoiled.

There are honest endings to TV series, apt endings and just endings, and these descriptors are not necessarily mutually exclusive. The finale of Hulu's "Little Fires Everywhere" manages to be all of these at once, and satisfyingly so, whether you've read Celeste Ng's novel or the story is entirely new to you. The series adaptation doesn't deviate from its original story to the point of making it unrecognizable.

On the contrary, executive producer Liz Tigelaar's decision to make key characters African American or gay, details Ng didn't specify in her 2017 book, adds a level of poignancy and recognizable complication to a story that is at its essence about motherhood, class warfare and one woman's blinkered view of her own goodness.

Between Reese Witherspoon's portrayal of Elena Richardson — righteous, passive-aggressive and malignant — and her clash against Kerry Washington's artist Mia, with her stirring combo of restrained panic, simmering anger and possessive maternal anguish, the entirety of "Little Fires Everywhere" plays as a work of beauty, as delicate and fragile as a sculpture made of flour and water.

Its final hour reflects this by way of the small artistic details lurking in the corners: the shot of Elena's home on a wintry night, snow-flocked and postcard-perfect … save for a string of lights that stutters on and off due to a short.

Or the fact that Elena angrily chastises her rebellious daughter Izzy (Megan Stott) for throwing away the shoes she wore in the holiday photo Izzy defiantly ruins, when Elena's response to the defiance — to completely cut her youngest out of all the photo prints — is far worse and comes at a higher cost.

Really, though, it's the outcome of trial that makes the most sense. The judge's custody ruling against Bebe Chow (Huang Lu), Mia's coworker at a local Chinese restaurant and an undocumented immigrant seeking to be reunited with the daughter she reluctantly gave up, May Ling, plays out as it is supposed to – meaning, it feels entirely unjust and is therefore correct. It's also what happens in Ng's novel.

Elena evicting Mia and her daughter Pearl (Lexi Underwood) is the inevitable denouement of their escalating series of hostilities, beginning with small class-related slights and culminating in Elena nearly succeeding in poisoning Pearl against Elena, and Mia granting emotional refuge to Izzy when her mother fails to support her through the bullying she endures at school for being gay. In being more maternal than Izzy's own mother, Mia unintentionally set the stage for what ultimately happens in the end.

Any discussion of who was revealed to have set those titular fires that burn down the Richardson family home, a major change from what happens in the book, feels secondary to those larger themes, even the blaze that opens the series. It's a huge conflagration, but it's also merely the climax of a drama that heats up in a compressed space, one that examines the extremes to which mothers will go to hold fast to their children and the brutishness with which they reject them.

"Little Fires Everywhere" foregrounds the clash between Mia and Elena, but it's also a tale about the price a woman pays for acting on her desires or squashing them down. Mia's life revolves around claiming Pearl as her own heart and flesh and blood regardless of cost or psychic injury to others. That last bit refers to the infertile couple who are the reason Pearl exists, who hired Mia as a surrogate years ago only for Mia to skip out on their deal and embrace life on the run in part to keep her daughter to herself.

If Mia is a fierce proponent of going one's own way, damn the consequences, Elena is the evidence of how harmful it can be when a woman feels forced to sacrifice her sense of self to fulfill the demands of motherhood. Those choices backfire on both women, but for Elena the damage could be insurmountable.

The series' larger scheme, though, is an examination of how we define goodness as individuals and as a culture. The identity shifts Tigelaar makes with Ng's characters become important touchstones in terms of enacting this filter.

Thus, as I previously wrote, the series presents the wealthy enclave of Shaker Heights, Ohio in the 1990s as a hotspot of a smug and clueless privilege where women like Elena can comfortably judge others. Elena views herself as progressive and yet wields the ill-gotten and inaccurate information about an abortion Pearl allegedly received as a cudgel, evidence that Mia is a bad mother.

Earlier on Elena uses her time and resources to dig into Mia's past and discover the truth of how Mia came to have Pearl and why she keeps her background a mystery to have leverage against Mia – against a woman who, remember, Elena first encounters while Mia and Pearl are sleeping in their car.

Showing up on her doorstep and tossing Pearl's supposed abortion in Mia's face is supposed to be the killing blow, one that backfires when Mia reveals the truth: Elena's supposedly flawless mini-me of a daughter Lexie (Jade Pettyjohn) actually got the procedure, using Pearl's name to hide it from her parents. Elena, in shock, refuses to believe.

Through these acts and others, "Little Fires Everywhere" shows how people like Elena justify viewing Mia and Bebe as less than themselves, simply because they don't fit their own notions of assimilation.

Whether they acknowledge or deny it, this demonstrates a view of Americanness that prevailed more than two decades ago and remains in place today. Hand in hand with it, then, is a tendency to blame people who look and live differently for our problems and for their own perceived failures.

The circumstances that lead Bebe Chow to surrender her baby, therefore, are her own fault and of her own making, not the result of an economic and social structure that's stacked against her. Sure, she's an undocumented immigrant (strike one) and she couldn't hold a job that paid enough to pay the bills or feed her child (strike two), making the act of surrendering her child one born of desperation.

Yet any woman who would abandon her child for any reason (strike three) is less deserving of that child than a couple who checks all the right boxes, especially the ones beside the terms "white" and "wealthy." This is part of the reason that Mia sides with Bebe and pays her legal fees, while Elena throws her support behind her friend Linda McCullough (Rosemarie DeWitt) and her husband, the wealthy and infertile couple that takes in May Ling, renames her Mirabelle, and raises her in luxury.

As the court case surrounding the custody battle reveals, the McCulloughs have been quietly erasing her Chinese heritage. They don't do this intentionally, they explain. Rather, it comes from an effort to make Mirabelle feel as American as possible — the implication being that whiteness is the default definition of Americanness — by, for instance, checking her ethnicity as white when the question comes up on forms.

No matter; the McCulloughs' custody win, as Elena's second oldest son Moody (Gavin Lewis) explains, was a foregone conclusion. "Why are you so upset?" he tells Izzy, who is outraged by the verdict. "Of course they won. They always do. The rich people, beautiful people, popular people, they think they own everything and don't give a shit about anyone else."

Elena's keen interest in defending and supporting Linda is really about justifying her sense of moral rectitude, and to explain how she feels about the youngest daughter she despises. In the finale, she she and Linda close the book on Bebe by assuring each other that Mirabelle's biological mother really didn't want May Ling. The viewer knows differently, of course. Elena takes the query a step further by posing this hypothetical to Linda: "Do you think she didn't want her from the beginning?"

Mia's motivations aren't entirely altruistic. She and Elena each play out their own fears and feelings about themselves through Bebe's custody battle and her emotional trials. And the fact that Mia hid a store of wealth from her daughter for so many years, in addition to the truth of her father's identity and the circumstances that led to her conception, creates a rift between Pearl and her mother.

But in the end, Pearl finds a way to absolve Mia of these sins because of their profound affection for one another.

Elena, on the other hand, loses her way in her efforts to destroy Mia, an act meant to satisfy her own sense of goodness by transforming an outsider into an enemy.

Elena also obsesses over justifying her animosity toward Izzy, who came along when she thought she was done bearing children and, according to her own interpretation, is the most difficult to love of her family.

She delivers that body-blow to her teenager in the penultimate episode; in the finale, in front of the rest of her children, she one-ups that insult by declaring she doesn't love her at all. In that moment, Izzy runs away.

Bill, already sick of Elena's vitriol, is already out for a drive. So a few moments following Elena's ugly tirade her children, including her golden boy eldest, Trip (Jordan Elsass), set fire to the family home. After it has burned down completely, she tells the arson investigator, who automatically assumes Izzy is responsible, that actually she is to blame.

And to be honest, that part of "Little Fires Everywhere" — the spontaneous, flaming revolt committed by Elena's remaining children, the ones she wanted — feels like a very TV ending, more than the details in the epilogue.

At the same time, it's also an indictment of the mentality Shaker Heights embodies, explained in scenes where Mia throws herself into her final project while listening to an account of the town's history, one Elena is proud to play a part in by being the family that fought for its integration. The audio recording points out that years ago, the local government offered incentives to white families who didn't succumb to white flight impulses, and then asks how progressive a town that paid its white citizens to live among black people can truly be.

As in the book, Bebe Chow sneaks into the McCulloughs' in the dead of night and takes Bebe, heading out on the run much in the way Mia did so long ago.

Mia and Pearl reconcile and leave Shaker Heights. Izzy is headed off to an unknown destination, and Elena, frantic with regret, runs to the house she rented to Mia and Pearl — the Richardsons' smaller starter house — and finds it empty, save for a gorgeous flour-and-water recreation of Shaker Heights with a tiny birdcage set dead center containing a single feather, and its door left open.

This is the drama's means of exiting on a hopeful and honest note. Shaker Heights, Mia offers in voiceover narration from a distance, and reading a passage written by Pearl, is a town made of blinding white flour and beautiful lies. But, she adds, "If we can finally see the lies and the town and the cage we're inside of, we can see so many other things too. We can see the door. A way out. And we can fly away."

In the end, then, how the fires came to be is less important that the possibility of what can rise in the aftermath.

All episodes of "Little Fires Everywhere" are currently streaming on Hulu