As it turns out, many of the protests across the country praised by Trump are far from grassroots movements 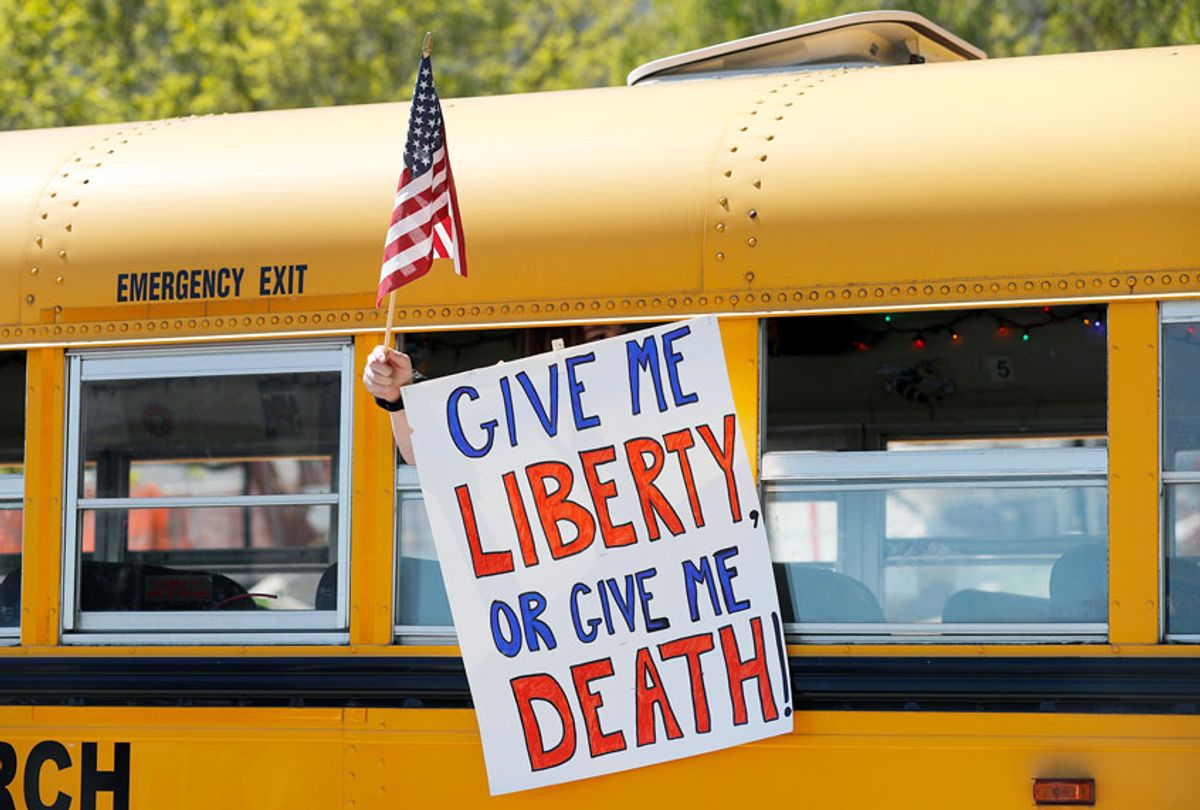 Major Republican donors are paying staffers to organize anti-lockdown protests, with plans to bus demonstrators to big cities to demand governors to let their businesses re-open and send their employees back to work.

President Donald Trump has so far praised protesters, saying the demonstrations show Americans want to go back to work.

"Look, people – they want to get back to work," Trump said Tuesday. "They got to make a living. They have to take care of their family."

But many of the protests across the country are far from grassroots movements, especially since a majority of Americans say they are more worried that coronavirus restrictions will be eased too soon than about reopening the economy,

A number of Trump-allied groups, including Tea Party Patriots and FreedomWorks, law firms with ties to Trump and state-based conservative groups are paying to organize the protests and even bring in individuals from outside of the cities where demonstrations take place, according to The New York Times.

"As was the case with the Tea Party movement, established national groups that generally align with the Republican Party have sought to fuel the protests, harnessing their energy in a manner that can increase their profiles and build their membership base and donor rolls," the outlet reported.

FreedomWorks, for example, is paying most of its 40 employees to organize the protests, and it is considering investments in digital ads to boost turnout, according to the report.

Organizers of recent demonstrations in Oklahoma admitted that the group helped arrange the event, saying they hoped to "help" Trump "politically."

Stephen Moore, an economist who Trump tapped for an advisory group for reopening the economy after his nomination to the Federal Reserve went bust, has also been coordinating with the group, as well as the Tea Party Patriots, to push for a faster re-opening of the economy.

Moore bragged in a recent interview that "one big donor in Wisconsin" pledged to "pay the bail and legal fees of anyone who gets arrested."

Several former Trump administration staffers are also working with the group ReOpenNC, which told members that a "generous" donor arranged to pay for buses to bring protesters from outside the city to Raleigh. Despite local media reports that the plan was scrapped, the donor, former defense contractor Tim D'Annunzio, said he was still planning to bus in protesters.

Groups linked to the family of Education Secretary Betsy DeVos also paid to promote protests in Michigan. Many on the left have pointed to the deep-pocketed groups to argue that the protests were an example of "astroturf," or movements manufactured by groups to look like grassroots protests.

Few of the donors behind the efforts have been as outspoken as billionaire Liz Uihlein, one of the biggest Republican donors in the country. Uihlein and her husband, Richard, have contributed more to Republican causes than anyone except casino magnate Sheldon Adelson and his wife, according to the Center for Responsive Politics. The patronage earned Uihlein a spot on Trump's economic advisory council during his 2016 campaign, and she was among the executives invited to discuss the coronavirus response with the White House last month.

"The Media is Overblowing COVID-19," she complained in an email to dozens of Illinois lawmakers in March. "At what point do we go back to our normal lives? This has been a huge disruption."

Uihlein, whose packaging company remains open because it supplies essential businesses, later sent an email to her employees urging them to sign a petition to recall Wisconsin Gov. Tony Evers over allegations that the Democrat violated their constitutional right to work, Bloomberg News reported.

The email sparked tension among the staff, according to the report, after four of the company's locations reported coronavirus infections. Though some office employees have been able to work from home since March, they questioned why the company was still forcing call-center staffers to keep coming in to work.

"I want to see America get back to work," she told the outlet. "We love our customers, and we love our employees. We think about our employees and their families. We need a strong economy and a healthy business to support them."

While Trump-allied Republicans are pushing to reopen states even though they do not meet the criteria in the White House's own reopening guidelines, many traditional conservative groups like the Koch network-funded Americans for Prosperity have urged caution.

"The question is: What is the best way to get people back to work?" Emily Seidel, who heads the group, told The Times. "We don't see protests as the best way to do that . . . the choice between full shutdown and immediately opening everything is a false choice."