"I will take a stand every day until we are a free people again . . . because someone has to do the right thing" 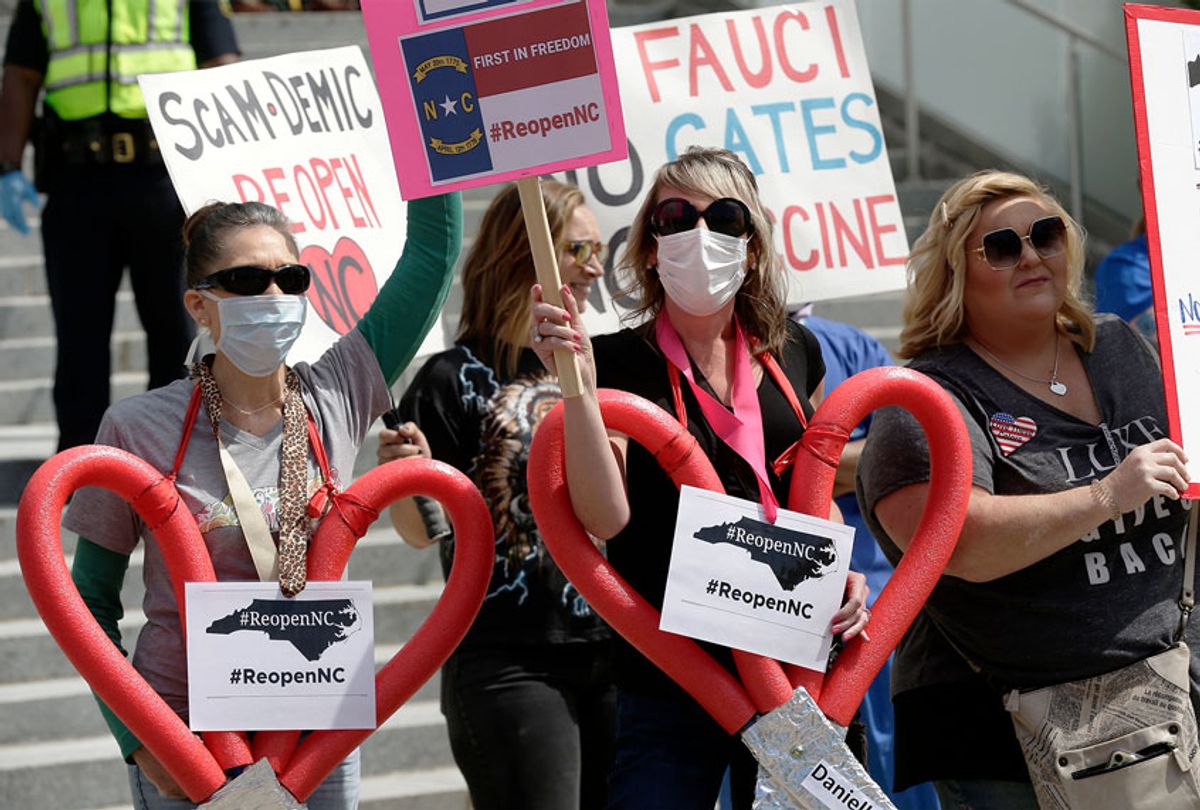 Police arrested four demonstrators Tuesday from a group of hundreds who had assembled in front of the governor's mansion in North Carolina to protest his stay-at-home order.

The individuals who were arrested — including Ashley Smith, leader of ReOpenNC — were cuffed for allegedly disobeying police instructions when they stepped onto the sidewalk in front of the mansion, according to the Raleigh News Observer.

Protesters smacked the windows of the cruiser that carried Smith away. Some of them handed her husband, Adam Smith, money for her bail.

"This is how Nazi Germany started," he said, one by one calling the Capitol Police officers standing guard "little piggie" through a bullhorn.

This was the third straight week of protests in Raleigh organized by ReOpenNC, a private Facebook group started in early April to challenge Democratic Gov. Roy Cooper's social distancing regulations.

Police also arrested one protester at the first rally on April 14.

"We are in violation of Comrade Cooper's order," a protester wearing an American flag shirt said. "If I get locked up today, I'm OK with that. As North Carolinians, we need to get back to work."

ReOpenNC's Facebook group has more than tripled in size since its first week to include more than 69,000 members, but the News Observer reported the physical crowd gathered this week was smaller the nearly 1,000 who gathered the prior week.

One of the group's leaders, Audrey Whitlock, posted Sunday to the page that she had tested positive for COVID-19 despite being asymptomatic. Her quarantine ended Monday.

"As an asymptomatic COVID19 positive patient (quarantine ends 4/26), another concern I have is the treatment of COVID patients as it relates to other communicable diseases. I have been forced to quarantine in my home for 2 weeks," Whitlock wrote.

A test shortage forced the state to change its approach late last month, and North Carolina state health department guidelines advise residents not to get tested unless they exhibit serious symptoms. A Chapel Hill pug named Winston on Tuesday became the first known dog in the U.S. to test positive for the virus. Winston has recovered, his owners told CNN.

Whitlock vowed in her post to join the next protest, though it is unclear if she showed up.

"I will take a stand every day until we are a free people again, to sound the alarm because someone has to do the right thing in the face of wrong," she wrote. "See you Tuesday."

ReOpenNC is one of a number of groups organizing protests against shutdowns across the country. A network of pro-gun activists and numerous prominent Republican groups are behind at least some of the protests of coronavirus restrictions seen around the country. Right-wing political figures and cable news personalities have feted the patriotism of the fringe movement — whose members have been spotted with Confederate flags — as has President Donald Trump.

It was reported last week that former Trump staffers had been coordinating with ReOpenNC, which announced that a "generous" GOP donor had offered to rent buses to carry protesters in for this week's rally. The plan was eventually scrapped.

Cooper offered sympathy, acknowledging at a Tuesday news conference that it can be "frustrating to be at home so much," especially for "people with families that are hanging by a thread." The governor made a plea for patience until it is time to begin phasing out restrictions.

"The thing we have to put first and foremost is the public health and safety of North Carolinians," he said. "We have to make sure that things are safe. I'm very eager to move into our phases of reopening. We have a way to look at the indicators to tell us how fast we are going to get there. I hope we move through these as quickly as possible."

Infection rates have declined in initial hotspots such as New York and New Orleans, but they are still rising in rural states. Experts, including the official White House task force, have repeatedly warned states against attempts to open before they can widely implement testing, contact tracing and ultimately, a vaccine.

Data from the North Carolina Department of Health and Human Services and county health departments indicated the state had seen 9,674 cases and 360 deaths as of Tuesday.