Ring the alarm bells: Media must respond to Trump's failure with urgency, activism

Trump's appalling failures mean that tens of thousands will die: It's time for the press to say that every day 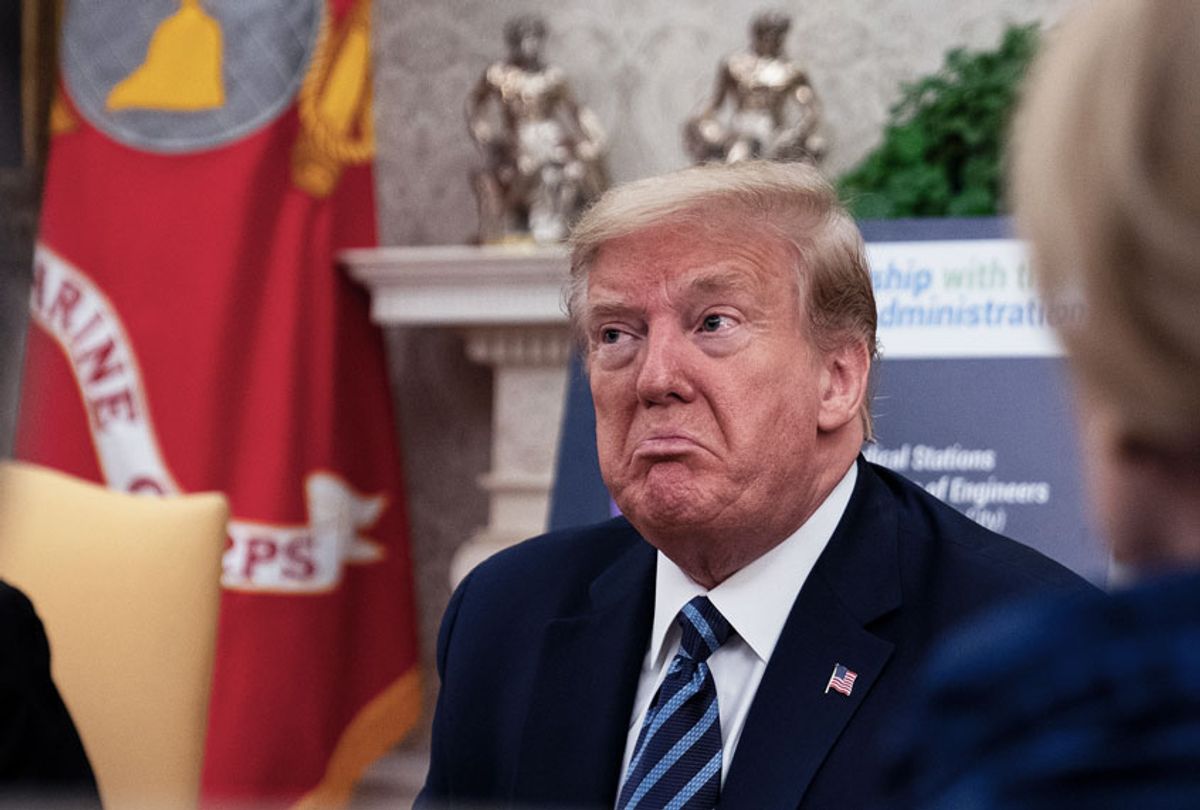 New projections of mass death in the United States should prompt the country's major news organizations to abandon any complacency in their government coverage. Instead, they should use every opportunity to sound the alarm about the extraordinary threat to the nation posed by Donald Trump's continued failure to effectively respond to the coronavirus pandemic.

Public health officials are clear that there is a way forward that minimizes the toll of the virus. But that depends on forceful federal action to supercharge the supply chain for testing, massively increase the daily number of tests, mobilize a nationwide contact-tracing program and set up facilities for infected people to self-isolate.

Trump is doing none of this. None.

As a result, all the sacrifices caused by social distancing and shutting down broad swaths of the economy — sacrifices that were intended to buy time — are being squandered.

Every single day that Trump is allowed to drag his feet is another wasted day, another lost day, another day of hiding and death and horror.

And now he's talking about winding down his task force?

Our top news organizations should be treating this with the urgency that befits an ongoing national disaster. They should be treating it like a hurricane bearing down on a city. Or as they do when the debt ceiling is about to expire, or when the government's about to shut down or election results are delayed. Or there's a war on.

We are heading straight into a calamity of epic proportions, holding our course, and the Washington press corps is taking notes instead of screaming bloody murder (or, more appropriately, negligent homicide).

Every reporter every day in Washington should be demanding answers. Every news organization every day should be reporting and telling the public about what we are failing to do, and what the people who could do something about it are or are not saying about it.

Every day that Trump fails to put credible, competent people in charge of the testing supply chain — and that Congress does nothing about it — those facts should be the lead story, because it's an outrage.

Every day we don't get closer to hiring and training a legion of contact-tracers means more dead Americans.

The Washington Post, the New York Times, and other major news organizations have done a remarkable job of chronicling how the federal government under Trump has failed over the past several months. They're good at the past.

But the political press is not nearly as good at looking at the present moment or the future, and saying: "Whoa! This makes no sense. This has to stop. This is madness."

That is exactly what needs to happen now.

The whole point of social distancing was that once the number of infected people declined and the government response geared up, we could begin to respond to outbreaks on a case-by-case basis: finding the sick through testing, tracking the infected and isolating them. Once the sick are isolated, it's safe to start letting people out of their homes. There will inevitably be new outbreaks after that, but at least in theory the government would then have the resources to swoop in, test, trace, isolate and repeat.

Reopening before we're ready means we are going to restart the whole cycle again — and means that tens of thousands of Americans, if not hundreds of thousands, will die unnecessarily.

And then there are the things that haven't changed. I've written a lot about Trump's response to the pandemic, and here is what has been clear all along:

He has no real plan to restore the country to health other than to peddle false hope, predict a quick end, adopt fake deadlines and shift the blame to others.

The media has blown its coverage of the federal response by letting political reporters lead rather than health reporters. Political reporters pay way too much attention to whatever Trump says, such that whatever it is makes headlines. They let him set the agenda instead of letting knowledgeable people do it.

Political reporters also give Trump way too much credit for trying, when he's not really. They cover up for his incoherence, ignorance, cluelessness, gaslighting and, yes, just plain stupidity. And they generally fail to properly exploit their rare access to him by confronting him with facts and piercing his bubble.

Finally, they fail to grasp that he does have a plan — but it's not a plan to return the country to health. It's a plan to get re-elected. It's a plan to dump his responsibilities on the states, and when all hell breaks loose blame the governors and sow confusion.

The plan is to have no plan, to let daily deaths between one and three thousand become a normal thing, and then to create massive confusion about who is responsible — by telling the governors they're in charge without doing what only the federal government can do, by fighting with the press when it shows up to be briefed, by fixing blame for the virus on China or some other foreign element, and by "flooding the zone with shit," Steve Bannon's phrase for overwhelming the system with disinformation, distraction, and denial, which boosts what economists call "search costs" for reliable intelligence.

Stated another way, the plan is to default on public problem solving, and then prevent the public from understanding the consequences of that default. To succeed this will require one of the biggest propaganda and freedom of information fights in U.S. history, the execution of which will, I think, consume the president's re-election campaign.

And yes, there's something the media can do about that: Fight the propaganda. Refute the misinformation. Bring clarity. Speak for the living, and the dead.

The New York Times did the nation a great service on Monday, publishing an internal document showing data collected by various agencies, including the Centers for Disease Control and Prevention, which forecasts about 200,000 new cases each day by the end of May, up from about 30,000 cases now. It also estimates about 3,000 deaths per day, which is about 70 percent higher than the current rate.

Do the math: That's a rate of 90,000 deaths per month as of June 1, considerably more in a month than the approximately 72,000 total U.S. deaths thus far. (A number that will undoubtedly have risen by the time you read this.)

The Times led its Tuesday editions with the somewhat but not sufficiently alarmist headline "U.S. Quietly Fears Virus's Daily Toll Will Soon Double." Sheryl Gay Stolberg and Eileen Sullivan noted that another model favored by the White House more than doubled its previous fatality projection on Monday. Then they wrote, evocatively:

The numbers underscore a sobering reality: While the United States has been hunkered down for the past seven weeks, the prognosis has not markedly improved. As states reopen — many without meeting White House guidelines that call for a steady decline in coronavirus cases or in the number of people testing positive over a 14-day period — the cost of the shift is likely to be tallied in funerals….

The projections amplify the primary fear of public health experts: that a reopening of the economy will put the nation right back where it was in mid-March, when cases were rising so rapidly in some parts of the country that patients were dying on gurneys in hospital hallways amid overloaded health systems.

The Times on Tuesday also published this excellent and alarming where-things-stand overview by Julie Bosman, Mitch Smith and Amy Harmon, who wrote:

The country is still in the firm grip of a pandemic with little hope of release. For every indication of improvement in controlling the virus, new outbreaks have emerged elsewhere, leaving the nation stuck in a steady, unrelenting march of deaths and infections.

As states continue to lift restrictions meant to stop the virus, impatient Americans are freely returning to shopping, lingering in restaurants and gathering in parks. Regular new flare-ups and super-spreader events are expected to be close behind.

Any notion that the coronavirus threat is fading away appears to be magical thinking, at odds with what the latest numbers show.

Over at the Washington Post, however, it just seemed like another ordinary news day. In the lead story, headlined "Trump applauds states reopening ahead of guidance," Toluse Olorunnipa, Griff Witte and Lenny Bernstein wrote about Trump cheering even as states that failed to achieve his ostensible guidelines are reopening.

So how should reporters react to the new numbers? Maybe more like David Dayen, at the American Prospect. He wrote:

If you really play out what the CDC model is showing, it gets you to half a million deaths by the end of the summer. You have to conclude, because what's happening is so obvious, that this is an acceptable level of death to the president and his staff. They are fine with mass death in America. They have always been fine with mass death in America; we let mass murderers get guns, after all. They would rather have mass death than pay for unemployment benefits for too long. Their entire strategy throughout April was to figure out the best way to allow mass death, in service to the economy. This was a false choice, incidentally; we will have mass death and an obliterated economy. And when that happens, the only straw left to grasp will be the culture war.

Our top news organizations have firmly established that time has been wasted.

The Washington Post published yet another look-back at Trump's disastrous response over the weekend, this one focusing on the 34 days of "desperation and dysfunction" between March 29, "when Trump agreed to extend strict social-distancing guidelines, and this past week, when he celebrated the reopening of some states as a harbinger of economic revival."

This comes after a March 14 Washington Post analysis that described blame-shifting, misinformation and missteps, and a slow recognition of the danger up to that point; a March 28 New York Times article on "The Lost Month: How a Failure to Test Blinded the U.S. to Covid-19"; an April 4 Washington Post article about how "Warnings were sounded, including at the highest levels of government, but the president was deaf to them until the enemy had already struck"; and an April 11 New York Times story which reported that Trump "was slow to absorb the scale of the risk and to act accordingly, focusing instead on controlling the message, protecting gains in the economy and batting away warnings from senior officials."

What we are not hearing loudly enough, however, is that the time is still being wasted. Every single day. It has to change.

This, from activist Bree Newsome, is the reasonable, human response to what is going on, too infrequently reflected in news stories:

And finally, here is New York Gov. Andrew Cuomo, from his briefing on Tuesday:

Cuomo then added: "That's not hyperbolic and that's not overly dramatic. That is just the fact."