The anti-lockdown protests are staged events, which demonstrate the enduring power of white supremacy in America 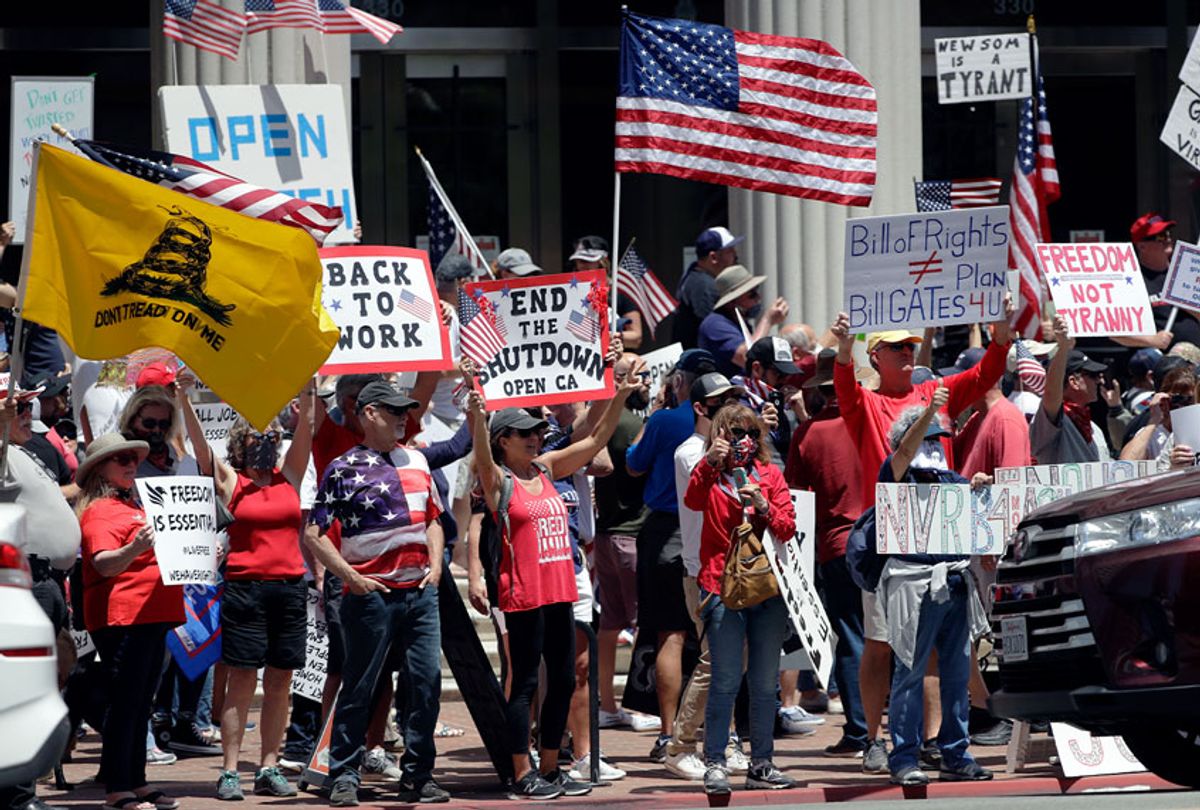 People hold signs and flags during a protest against measures aimed at slowing the spread of the new coronavirus Friday, May 1, 2020, in San Diego. (AP Photo/Gregory Bull)
--

Donald Trump has no moral compass.

Infamously, he called the white supremacist street marauders and other hooligans who rampaged through Charlottesville in 2017, killing Heather Heyer and injuring dozens of others, "very fine people."

Donald Trump slurs and condemns black athletes who protest police brutality and other human rights violations as "sons of bitches."

Trump is now praising his followers who at his treasonous command are "protesting" social distancing and stay-at-home public health rules, largely in states and cities led by Democratic mayors and governors.

Last Friday, he described his foot soldiers who are running amok across the United States violating public health rules as "very good people." Trump has encouraged these followers to use blackmail and the threat of terrorism to force Michigan Gov. Gretchen Whitmer into ending that state's stay-at-home-order and other anti-pandemic efforts.

There is nothing "very good" about these Trumpists and those in league with them who demand the end of rules designed to protect the American people from the deadly coronavirus pandemic.

Rallies such as those in Lansing, Michigan, and numerous other state capitals are staged events. They provide a platform for fraudulent versions of "populism," supposed expressions of the "people's will" and "legitimate anger." This is the stagecraft of authoritarians and other illegitimate leaders and governments.

In reality, the Trump movement's "protests" are funded by members of his regime and other right-wing organizers. These "populist" protests are also being summoned by Trump's right-wing news media propaganda machine, plutocrats and Christian nationalist leaders.

In total, Trump's pseudo-populist coronavirus "protests" are tainted at the root. They are celebrations of white privilege, white racism and white rage.

Last week, hundreds of Trump supporters and other members of the white right participated in fake protests at Michigan's state capitol where they flew Confederate flags, displayed Nazi symbols and brandished assault rifles and other weapons.

Last Thursday's Michigan protest also featured a race-minstrel blackface performance in which a white girl mocked Barack Obama, wearing a mask that darkened his features to make him look like a grotesque, stereotypical cartoon figure.

Another white girl wore a Donald Trump mask. The two girls danced on stage to a song about "the government" taking money from one group of people and giving it to another.

This performance was a clear channeling of the white supremacist lie that Barack Obama was a "welfare king" who took money from "hardworking Americans" (inevitably, white people) and gave it to lazy, listless, black people and other nonwhites.

The white adults in the audience — many of them old enough to remember the Jim Crow era — smiled with approval during the performance. The two children most likely had no idea that adults were using them as human props in a white supremacist dance performance.

In an interview on Sunday with CNN, Whitmer summarized the entire white supremacist spectacle in Lansing:

Some of the outrageousness of what happened at our capitol depicted some of the worst racism and awful parts of our history in this country. … There were swastikas and Confederate flags and nooses and people with assault rifles. That's a small group of people when you think that this is a state of almost 10 million people, the vast majority of whom are doing the right thing.

The crescendo of last Thursday's events in Michigan involved an all-white militia group armed with assault rifles and wearing camouflage entering the capitol building and threatening the governor by blocking the entrance to her office. This same group of right-wing paramilitaries and other extremists also confronted police, yelling and screaming in the latter's faces from mere inches away. These militia members are apparently connected to white supremacist and other neo-fascist organizations.

The presence of these armed paramilitaries at Trump's coronavirus "protests" is an act of political terrorism. The gun is the ultimate conversation stopper. There can be no proper public discourse based on facts and reason — prerequisites of a healthy democracy – when one group of people is signaling that lethal force will be used against anyone who dares to disagree with them.

Writing at the Intercept, Aleksandar Hemon explains the danger to democracy from Trump's paramilitaries and the types of politics embodied by his movement and their "protests":

[Trump] promised, implicitly and explicitly, revenge and punishment for those who wronged white America. As we now know all too well, white America's response to Trumpian revenge fantasies was quick and enthusiastic, and thus the GOP graduated from a routinely racist conservative party to one unquestionably committed to white nationalism, up to and including outright white supremacy.

Trumpism is nothing without the constant perpetuation of conflict.

In the meantime, Trump, the chosen tool of undoing, has been carrying out his promises, with the full and passionate support of the GOP and many of its rich donors. The claims of false and foolish pundits notwithstanding, at no point was Trump going to relent, change, or metamorphose into being "presidential," for the simple reason that Trumpism is nothing without the constant perpetuation of conflict.

Hemon continues, drawing on his personal experience in the former Yugoslavia:

For many of my fellow ex-Yugoslavs, it was instantly clear that once the GOP and Trump committed to conflict and destruction, they could never afford to quit, for that would constitute a tactical error leading to an irreversible defeat. They now have no choice but to follow their trajectory to its logical extreme, which must be victory and rebirth at all cost. They will kill if they have to, or at least let Covid-19 do it.

When armed Trumpists pretend to be a happening of good people who demand the end of the lockdown, anti-fascist ex-Yugoslavs don't necessarily see an American version of murderous Serbian paramilitaries. What we see with heart-clenching clarity is that the familiar nationalist strategy of perpetually inciting conflict is advancing along a predictable trajectory.

As recently seen in Michigan, Trump's fake coronavirus "protests" were also a public demonstration of an old rule in American life: no one should ever be so bold as to tell white people "no." That rule is especially true when it comes to right-wing white men — and it still applies even if the restrictions apply to all people and are in everyone's collective self-interest.

They may lack an accurate understanding of American history, but Trump's supporters intrinsically know that the country was founded as a "racial democracy" where those people deemed "white" are to have more freedom of action than all others. By implication, white people are also to be insulated from the negative consequences of their own actions as a group. In total, whiteness in America confers freedom from personal responsibility and accountability.

In the case of the coronavirus pandemic, if Trump's supporters fall ill from their own acts in defiance of social distancing and stay-at-home edicts they will still demand medical support and other assistance — and feel entitled to it.

If the American economy continues its downward spiral to a second Great Depression because of the pandemic and the Trump regime and the Republican Party's many failures of public policy and decision-making, Trump's supporters will have their hands out, demanding money and other assistance from the government. .

And of course, Donald Trump and the Republican Party, their news media and supporters will blame, as always, nonwhite people or some imagined Other as the real cause of the crisis.

Because something is obvious makes it no less true and important: If the Michigan "protesters" and their rabble were black or brown or Muslim and behaved in even a vaguely similar fashion, they would have been beaten, brutalized, arrested and quite likely shot dead by police. Once vanquished, they would have been described as "terrorists" and "thugs" by Donald Trump, his supporters and the right-wing media. Mainstream news media would have largely echoed that dishonest narrative, in somewhat milder language.

On this point, Rep. Rashida Tlaib of Michigan explained the work done by whiteness at the protests in her state: "Black people get executed by police for just existing, while white people dressed like militia members carrying assault weapons are allowed to threaten state legislators and staff."

On Twitter, author Frederick Joseph compellingly described this long history or white privilege and hypocrisy operating in the present:

Years ago, I peacefully protested the murder of Eric Garner. As we walked past officers I looked at one and he said "Give me a reason to bust your head open." I kept peacefully walking. Had we done this instead, we'd be dead. White privilege.

If anyone can't see that there are two Americas, one that is white and another that isn't — it's because they don't want to see. Every day we see people on the news getting away with things that would have us murdered.

There are too many examples of the way white privilege functions as a lethal double standard, and as raw hypocrisy, to conceivably list them all.

Police officers are always "in fear of their lives" when they shoot and kill or otherwise abuse unarmed black people. By comparison, white men with assault rifles and other weapons can invade government buildings — and even threaten a state governor — while police stand impassively like golems, exercising remarkable self-control, standing stone-faced while they are verbally threatened and insulted.

America's police and others acting in their name can chase down and kill black people who are minding their own business, jogging, riding bikes, sleeping in their cars, playing in parks or just walking home.

America's law enforcement agents and others who are "standing their ground" abuse or kill black innocent people and then claim that objects such as keys, wallets, cell phones or just bare hands are lethal weapons. "Negrophobia" and the imagined supernatural powers of black people are deemed to be legal justification for state-sponsored and other anti-black violence.

As with the coronavirus pandemic, Trump's fake protests are spreading across the United States.

As occurred in Michigan, the police showed amazing restraint in a situation where if black or brown or Muslim people (or leftists or anti-fascists) had done the same thing they would have been met with lethal force.

Ultimately, the coronavirus pandemic is but another example of many in which white privilege and white supremacy are forces of death and destruction. This is true not just for nonwhite people but for white folks as well.

Trump's followers — especially those at fake coronavirus protests, in evangelical churches and at his rallies — have been programmed by Fox News and the right-wing echo chamber. They are willing to sacrifice their lives in service to his cause as an act of loyalty and love.

Trump is their personal necromancer. His administration has ordered 100,000 new body bags, which some of his followers will soon occupy in tribute to their cult leader and father figure. In the coronavirus pandemic, Trump's most loyal supporters are literally dying of whiteness.