"Can a single human actually be as loathsome?" the Fox News host asked of the congresswoman of color 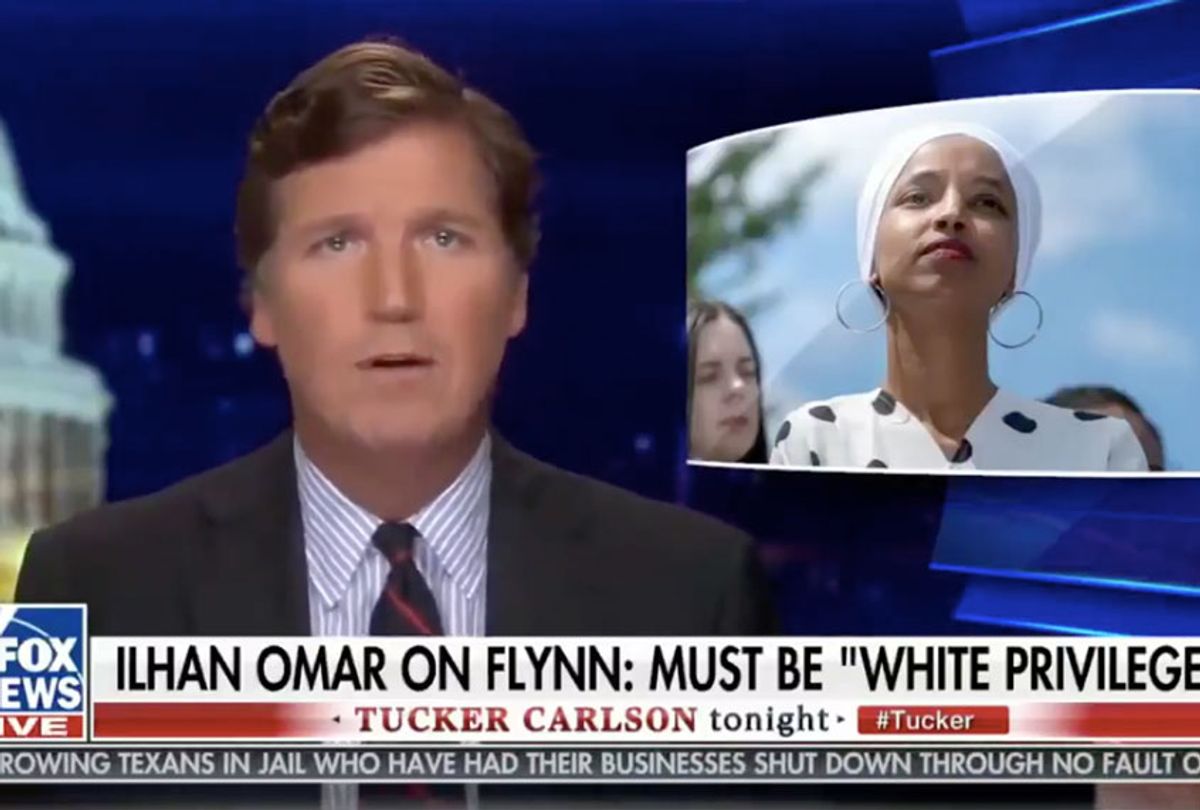 "Omar didn't explain what in the world Mike Flynn's case might have to do with his skin color, which he cannot control," Carlson told his viewers Thursday. "But she announced the decision as racist, anyway."

He added, "Surprised? You shouldn't be surprised. Ilhan Omar is the person who clearly married her own brother in an immigration scam, who passionately hates the country that saved her, who reduces every conceivable issue to the most vicious kind of race-baiting. Can a single human actually be as loathsome as Ilhan Omar? It's hard to believe. She's like a parody of repulsiveness. Sometimes you doubt she really exists."

Carlson's comments about Omar having "married her own brother" refer to right-wing claims that her former husband Elmi was actually her sibling. In other Thursday tweets about the Flynn case, Omar wrote that "Millions of people—mostly black and Latino men—spend years in jail trying to prove their innocence. Some die in jail. Michael Flynn was exonerated for crimes *he admitted to* with the blink of an eye."

She later tweeted about Carlson's criticism, writing that "Tucker gets paid $6 million a year to stare into a camera and incite his followers to threaten the life of a sitting Member of Congress. There is a reason that every time Tucker does a segment on me death threats go up."

Omar added, "Corporate America, this is what your ads are bankrolling."

Led by Attorney General William Barr, the Justice Department announced Thursday that it was dropping charges against Flynn, who in 2017 admitted to the FBI that he had lied to law enforcement about his contacts with a former Russian ambassador during the presidential transition. Former special counsel Robert Mueller recommended no time behind bars for the retired general due to his "substantial" assistance. Flynn's lawyers subsequently claimed that he was entrapped and that his initial FBI interview was "untethered to, and unjustified by, the FBI's counterintelligence investigation."

"It is telling that the career prosecutor, Brandon Van Grack, has withdrawn from the case," former U.S. attorney Barbara McQuade told Salon.

She added, "There is nothing in the public record to justify this dismissal. Flynn lied to the FBI about undermining U.S. foreign policy with Russia. The internal strategy discussions of the FBI do nothing to negate that fact."

Carlson, who called white supremacy a "hoax" in racist comments last year, formerly called conversations about racism "fruitless" in a 2019 interview with Salon.

"I would never make the case that racism doesn't exist, or it's not a factor. Of course it does and it is," Carlson said. "But in the end, our racial differences or sex differences are immutable differences that can't be fixed. They can't be changed. They're set at birth, so it's not only counterproductive, but in my opinion, it is an intentional diversion away from conversations about things that we could potentially change, like tax rates. Those could be changed today by an act of Congress, and they're not changed, because the rest of us are having these fundamentally fruitless conversations — really at the direction of the people who are benefiting most from the status quo."

You can watch a clip of Carlson's comments below via Twitter: