Reading the Federalist Papers under lockdown: Is Donald Trump dissolving our union?

Hamilton and Madison argued that a central government was urgently needed. That's more true now than ever 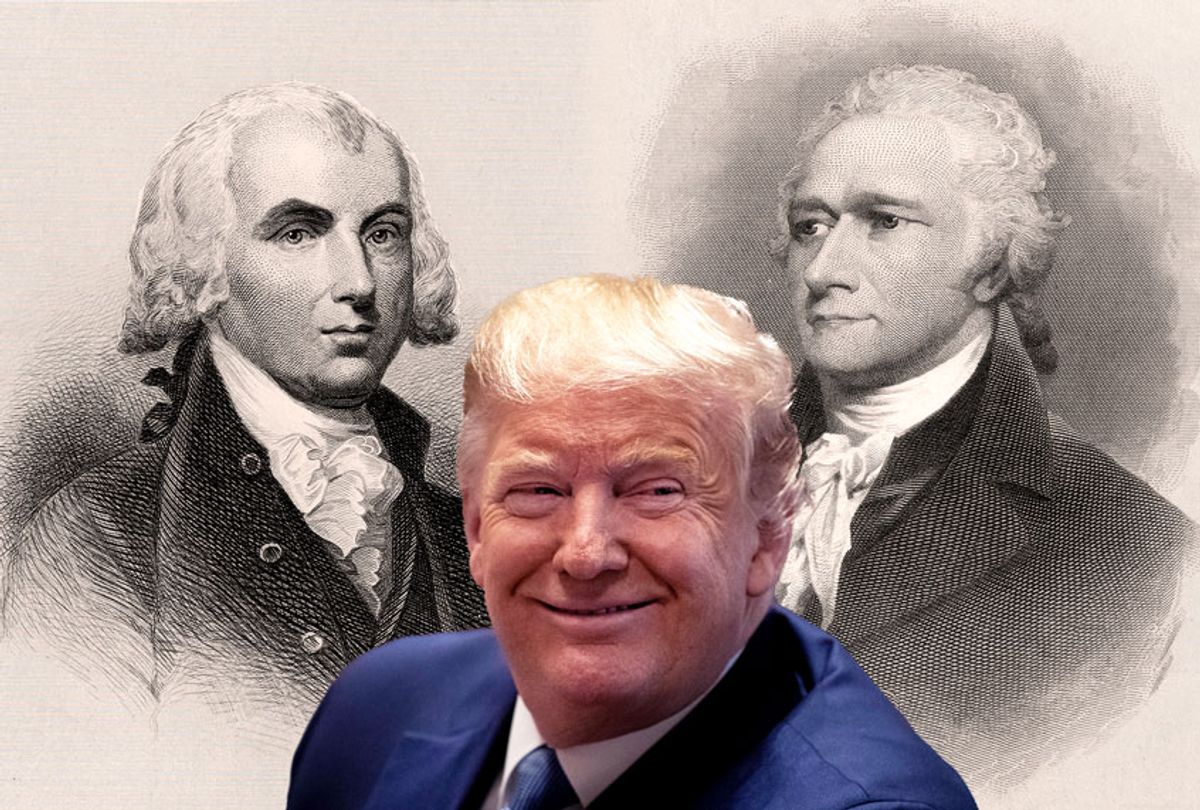 Has Donald Trump dragged the nation back to a point in time before it was a nation?

In the eyes of many citizens, and in the eyes of much of the world, he's done his best to destabilize us internally and weaken relations with our allies. His time in the White House and (one would be remiss to not say it) his Florida getaway, Mar-a-Lago, has even affected how we experience time itself — for many of us, days seem like weeks, weeks seem like months; his three-some years in office feels akin to a decade. Ironically, the country itself seems to have experienced a form of living under strict quarantine orders since he talked of "American carnage" at his modestly attended inauguration in January 2017.

Has he now managed to truly un-nation us?

I've been allotting a portion of my shelter-in-place time to work through the Federalist Papers, the 85 articles Alexander Hamilton, James Madison and John Jay penned to the people of New York state in 1787-88 and published in New York newspapers under the pseudonym "Publius." The three founding fathers fervently believed that all 13 states should ratify the newly proposed Constitution so all citizens could enjoy the many benefits of a stronger central government. Only then, they concluded, could the unified nation be taken seriously on the world stage and prosper.

They feared the states would reject the Constitution and continue to remain separate competing entities under the Articles of Confederation of 1781. There was talk that states might further align themselves into various geographical confederacies and suffer the obvious inefficiencies and jealousies inherent in such arrangements. They (mostly Hamilton and Madison, who penned the bulk of the articles; Jay wrote five and then dropped out due to illness) argued that in matters of commerce and taxation and defense and just plain efficiency, unity had to prevail.

Or else, as my friend Kevin would say, the other countries would push us around in a circle and muss our hair.

As I have read the articles — one or two at a time, carefully underlining key passages because I have arranged with a first cousin once removed (twice removed, if we count the current need for a Zoom meeting) to discuss the articles as he reads them — I have been struck by how pertinent they are to the contemporary government response to the COVID-19 pandemic. The various governors who are taking the situation seriously are being, time and again, thrown back on their heels by the Trump administration while the president refuses to take any responsibility, prefers not to be seen as a shipping clerk, gives unhinged medical advice and tells the states they are on their own, using medical supplies as a reward for toadies and supporters.

One might more accurately call it the Trump anti-administration.

For Americans, the Federalist Papers have always been pertinent reading, as the claims of states' rights keep being made, mostly by Republicans, in the name of liberty but really in order to take away individual rights provided at the federal level — say, the right to vote, access to health care, the control of one's own body and the doctor-patient relationship. To confuse the matter further — which, in the decades during which spin morphed into brazen lies, often seems the only point — since the time of Reagan, the defenders of states' rights — that is, the anti-Federalists — have determined to call themselves Federalists. The Supreme Court and other federal courts are currently being packed by judges trained by the so-called Federalist Society, who thus take a dim view of the powers of the federal government.

But now the arguments made for the necessity of unity are beyond pertinent, as the current occupant of the White House moves the country back to something like a pre-constitutional state of being — bullying the states into competition with each other for urgently needed medical equipment and financial assistance. As many have pointed out, it's like we are playing some cheap reality-show scenario. But, you know, for keeps.

As anyone who has read the brilliant biography of Alexander Hamilton by Ron Chernow would remember, Hamilton and George Washington keenly felt the inefficiencies of our loose confederation of states during the Revolutionary War, as they watched their troops go without boots in the snow and waited, often in vain, for supplies and more men to arrive from the various states.

Well, here we are again, standing bootless in the snow during a crisis. In the year 2020, governors of various states are forming confederacies out of necessity due to the deathly slow, always incoherent, seriously baffling and endlessly self-serving response of the president and his inner circle. For the want of boots, just swap in ventilators and PPEs.

In the founding fathers' day, the possible confederacies most spoken of were the four Eastern states, the four "middle" states and the five Southern states. Today, we see a number of Eastern, Midwestern and Western states allying themselves to oversee a proper response to testing and the possible reopening of their economies in a reasoned, data-driven fashion. Seven East Coast states (from Massachusetts, Connecticut and New York down to Delaware) have formed an alliance, as have another seven Midwestern states (from Minnesota and Michigan through Illinois to Kentucky). The governors of California, Washington and Oregon formed the Western States Pact, which Colorado and Nevada have now joined. Governors of other states have been in close contact with each other due to the lack of a coordinated response from the federal government.

As they are now abundantly and painfully aware that they will not be led by this president in any rational, reality-based manner, they have chosen to team up. It's a bit like a game (though the most earnest imaginable, where lives are on the line) where the governors are picking the best possible teammates. In the end, unselected, Trump is left standing on the sidelines. That image brings a tear to my eye. (Oh, wait — it's this mask fogging up my glasses. Never mind.)

In "The Necessity of a Government as Energetic as the One Proposed to the Preservation of the Union" (Federalist No. 23, Dec. 18, 1787), Hamilton's argument for the necessity of a strong federal hand in the public defense — which, of course, extends beyond enemy nations — speaks with special purpose to us today:

Who is likely to make suitable provisions for the public defense, as that body to which the guardianship of the public safety is confided; which, as the centre of information, will best understand the extent and the urgency of the dangers that threaten; as the representative of the whole, will feel itself most deeply interested in the preservation of every part; which, from the responsibility implied in the duty assigned to it, will be most sensibly impressed with the necessity of proper exertions; and which, by the extension of its authority throughout the States, can alone establish uniformity and concert in the plans and measures by which the common safety is to be secured?

A number of governors of both parties took quick action in asking their citizens to stay home and, later, to wear masks. Ohio, even with Republican Gov. Mike DeWine, has joined the Midwestern alliance of states. But a number of governors took their cues from the White House and initially treated the pandemic as a hoax. Then, as the dire situation became more than abundantly clear, these governors attempted to claim they had been on it all along or had "just learned" that people without symptoms could spread the virus. Lately, many have determined to reopen their economies against the advice of health experts.

Of the states, as John Jay wrote, in his "Concerning Dangers from Foreign Force and Influence" (Federalist No. 3, Nov. 3, 1787):

The pride of states, as well as of men, naturally disposes them to justify all their actions, and opposes their acknowledging, correcting, or repairing their errors and offenses. The national government, in such cases, will not be affected by this pride, but will proceed with moderation and candor to consider and decide on the means most proper to extricate them from the difficulties which threaten them.

Well. It just goes to show that even a founding father simply cannot anticipate everything. We must, however, give it to Jay that he would have been correct in his logical estimation of the natural moderation of a national government — at least until the absurdly far-off year of 2017.

When Trump tweeted his support of protests that verged on violent insurrection to "LIBERATE!" the states of Virginia, Michigan and Minnesota (apparently, so people can congregate and not wear masks and not follow his own health experts' recommendations — oh, and brandish guns in public, as some are suspiciously eager to do), we can see that his strategy is to continue to feed his base of voters the steady diet of trolling the liberals (and the scientists, other experts and generally reasonable people) he and they so relish.

To these provocations, the writers of the Publius articles would warn us not to allow one unhinged anti-federalist president to divide us forever.

In a passage from his "Objections to the Proposed Constitution From Extent of Territory Answered" (Federalist No. 14, Nov. 30, 1787), Madison seems to be directly speaking to us today, warning against heeding those who would attempt to gain politically by dividing us:

No, my countrymen, shut your ears against this unhallowed language. Shut your hearts against the poison which it conveys; the kindred blood which flows in the veins of American citizens, the mingled blood which they have shed in defense of their sacred rights, consecrate their Union, and excite horror at the idea of becoming aliens, rivals, enemies. And if novelties are to be shunned, believe me, the most alarming of all novelties, the most wild of all projects, the most rash of all attempts, is that of rendering us in pieces, in order to preserve our liberties and promote our happiness.