Lawyers claim total immunity in effort to keep Trump's taxes hidden: He is not "an ordinary citizen" 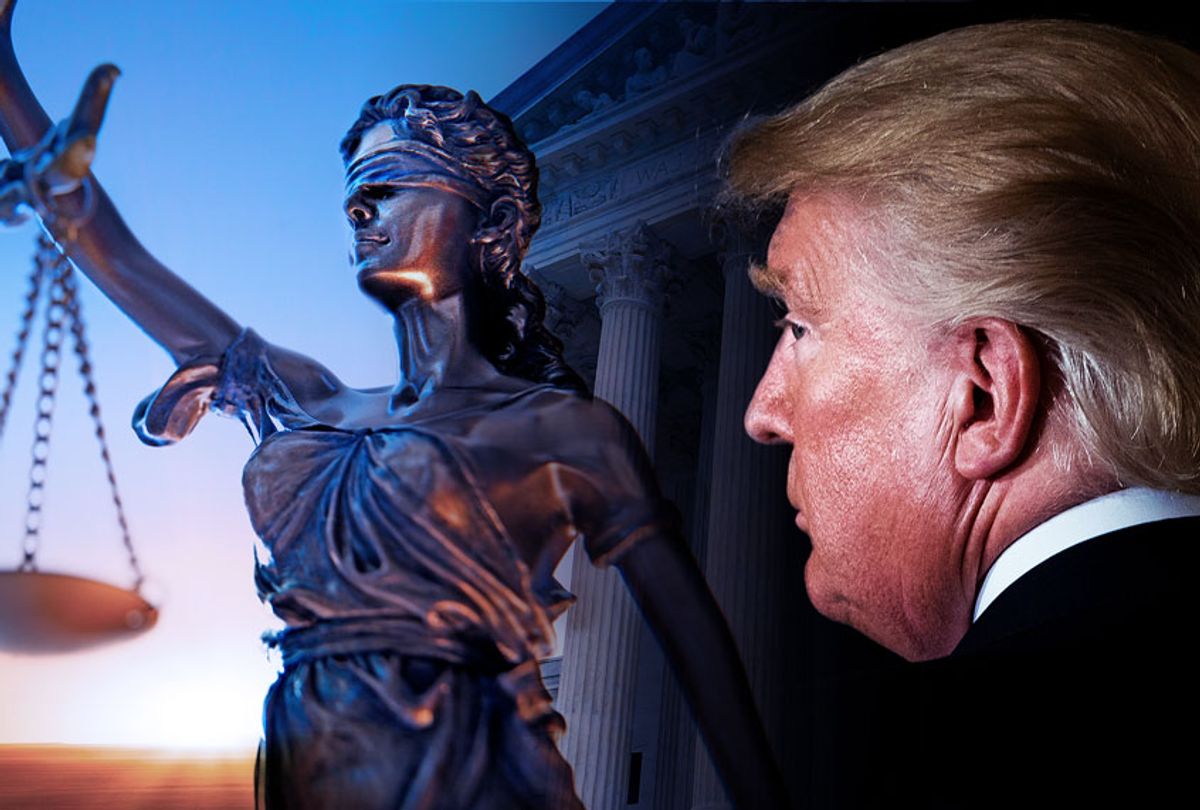 Donald Trump's lawyers argued that he should be immune from investigations into his life before he took office while he is president as the Supreme Court weighed two subpoenas seeking his tax returns and financial records.

The Supreme Court heard oral arguments Tuesday in two related cases: one in which Manhattan District Attorney Cy Vance subpoenaed Trump's tax returns in an investigation of the president's hush-money payments and another in which three House committees subpoenaed financial institutions for Trump's financial records. Trump's attorneys were rebuffed by lower courts at every level as they argued that the president has "absolute immunity" from such subpoenas and investigations.

During arguments in the Vance case, Trump attorney Jay Sekulow argued that the president is no regular Joe.

"A president is not to be treated as an ordinary citizen. He has responsibilities. He is himself a branch of government. He is the only individual that is a branch of government in our federal system," Sekulow said. "Our position is that the Constitution itself, both in structure and text, supports the position that the president would be temporarily immune from this activity from a state proceeding while he is the president of the United States."

It is a novel argument given that the subpoenas were issued to Trump's accounting firm and banks with which he did business — not the president himself.

The argument did not sit well with Justice Stephen Breyer, who questioned why "ordinary standards" did not apply to Trump when the Supreme Court ruled in the Clinton v. Jones case that former President Bill Clinton had to submit to a deposition in a lawsuit.

"There might be a million, I don't know, tens of thousands of people who might bring lawsuits," Breyer said. "Perhaps all of them are unfounded, but they could file the paper."

Sekulow attempted to argue that the case before the court "shows the burdensome nature" of the requests as Breyer cut him off.

"Then he'd hire you, and he'd hire a lawyer to list what the burdens are," Breyer said. "That wouldn't take a lot of time, and then he wouldn't be burdened."

Sekulow tried to argue that Trump was too busy "handling a pandemic" to discuss legal issues but ran out of time to respond. He did not mention that Trump has spent time amid the pandemic pushing conspiracy theories about MSNBC host Joe Scarborough and complaining that fellow network host Chuck Todd should be fired.

Carey Dunne, the counsel for the Manhattan district attorney's office, urged the court to allow prosecutors to move forward with their investigation — or "risk that American presidents and third parties could unwittingly end up above the law."

"We've already lost nine months of time in this investigation due to this lawsuit," Dunne said. "Every minute that goes by without even a decision on the merits here is granting the kind of temporary absolute immunity that the president is seeking here."

"Every president voluntarily turned over his tax returns, so it gets to be a pitched battle, because President Trump is the first one to refuse to do that," she said. "Initially, he said because of an audit was ongoing. Now, it seems to be broader than that."

Ginsburg questioned how Trump's lawyers distinguish their case given that the Supreme Court ruled that Clinton had to turn over personal records in the Whitewater investigation. Former President Richard Nixon also had to turn over tapes in the Watergate probe.

"[It's] important to note that in all of those cases — almost all of those cases actually involved cooperative efforts," Strawbridge said. "As the court recognized below, consent is not the major of constitutionality. In none of those cases was there a challenge to the scope or to the power of the legislative committee in that case to request those documents."

Trump's attorneys have argued that the House subpoena was illegitimate because it was politically motivated. Jeffrey Wall, a Justice Department lawyer who backed the president's team in court, claimed that sitting presidents should be held to a different legal standard.

"How'd that work out in the Paula Jones case?" Ginsburg shot back.

Trump's lawyers repeatedly accused the House of "harassment" as they attempted to argue that the subpoena had no legislative purpose. The House argued that the financial records were necessary to probe the president's potential conflicts of interest.

Justice Elena Kagan said that the argument would "essentially make it impossible for Congress to perform oversight and carry out its functions where the presidency is concerned."

Ultimately, the justices "seemed unlikely to grant President Trump the sweeping grant of total immunity he has asked for," Axios reported, but seemed "likely to raise the bar that both Congress and local prosecutors would have to meet before they can obtain Trump's financial records."

Some observers predicted a split decision.

"If I had to guess, I'd say Trump has a better chance of winning [the House case] than Vance. The Paula Jones case clearly dictates the outcome in Vance — no matter how much Sekulow blathers about presidential harassment. But I couldn't count five votes for anyone holding in either case," Slate's Supreme Court watcher Mark Joseph Stern said. "Is it possible Trump will lose both cases? Certainly, and he should. But I can see [Chief Justice John] Roberts concocting a compromise that draws out this litigation by forcing lower courts to scrutinize the subpoenas more closely, which could run down the clock on Trump's presidency."

Attorney George Conway, the husband of top Trump adviser Kellyanne Conway, played a key role in the Jones' legal efforts and wrote a Supreme Court brief in the case.

"To say Trump's argument is frivolous demeans frivolity. Clinton v. Jones dictates the result: The subpoenaed documents have nothing to do with Trump's presidential duties — zip. That alone does it," he wrote in a Washington Post op-ed. "But Trump's case is even weaker than Clinton's. At least Clinton was being sued personally… Here, Trump hasn't been charged with or sued for anything. He's not being required to do anything. The subpoenas have been directed at his company and his accountants. They don't require his time or attention."

Trump's defense, he said, betrays the foundation of the Constitution.

"The Constitution is concerned with protecting the presidency, not the person who happens to be the president. That's because no one in this country is above the law," he wrote. "The Supreme Court is now called upon to teach that lesson once again — even if Trump will likely never learn it."