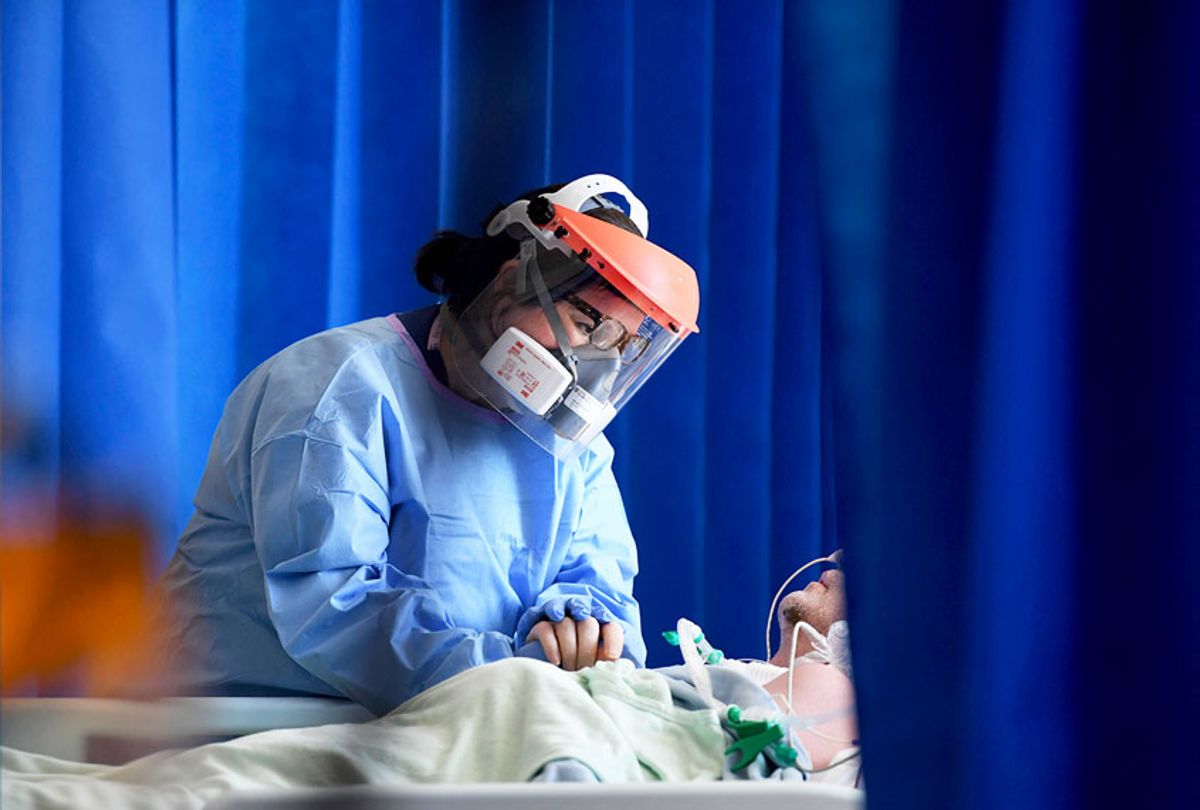 A member of the clinical staff wearing Personal Protective Equipment PPE cares for a patient with coronavirus in the intensive care unit at the Royal Papworth Hospital in Cambridge, England (Neil Hall/Pool via AP)
--

The World Health Organization (WHO) announced Tuesday that there are treatments which seem to limit the severity or length of COVID-19, and that they hope study four or five of the most promising ones.

"We do have some treatments that seem to be in very early studies limiting the severity or the length of the illness, but we do not have anything that can kill or stop the virus," WHO spokeswoman Margaret Harris explained during a briefing, according to Reuters. She added, "We do have potentially positive data coming out but we need to see more data to be 100% confident that we can say this treatment over that one."

Salon spoke with Dr. William Haseltine, a biologist renowned for his work in confronting the HIV/AIDS epidemic, for fighting anthrax and for advancing our knowledge of the human genome. He is also the founder and former CEO of Human Genome Sciences, and is currently the chair and president of the global health think tank Access Health International.

"I trust the World Health Organization," Haseltine told Salon when asked about whether their findings are credible, given that the WHO has been attacked by President Donald Trump as "China-centric" and of having "missed the call" by not warning about COVID-19 earlier. Haseltine added that they have "very high quality advisors and they're generally pretty careful" and said that those denouncing the WHO "are not trustworthy themselves."

At the same time, Haseltine cautioned the public against exaggerating the meaning of the WHO's report, which is reliable but does not necessarily indicate that we are out of the woods in terms of the pandemic.

"What they say as far as I can say, according to the quote, is we do have some treatments that seem to be in very early studies limiting the severity or the length of the illness, but we do not have anything that can stop the virus. That is exactly my understanding of the current situation," Haseltine told Salon. He also acknowledged that the report disparaged hydroxychloroquine's effectiveness as a COVID-19 medication. Trump has repeatedly touted the drug's supposed benefits.

Dr. Eric Feigl-Ding, epidemiologist and senior fellow at the Federation of American Scientists, cautioned people to not misinterpret the WHO's findings in an overly-optimistic light.

"It didn't reduce mortality significantly," Feigl-Ding explained. "There's actually two trials that came out on the same day. The bigger trial only showed a borderline suggestion of a mortality reduction, and then there was another smaller trial that also didn't show any mortality difference whatsoever. I think the main thing was that disease or duration of the illness. So it's not a magic bullet; it was shortening illness by 31%, but again, it didn't affect mortality significantly. It's hard to say. There are no slam dunk drugs out there, but there's so many other drugs in the pipeline."

Feigl-Ding added that this did not mean he believes people should not be hopeful about the WHO study.

"I think people should look up and see that there's hope," Feigl-Ding explained. "If you look at the history of HIV drugs, today we have a cocktail that works on a combination that can basically manage HIV to just a chronic disease and keep the virus in check. But the early trials of HIV were all kinda like modest. But then we built up like a repertoire, like a cocktail that together worked incredibly well."

He added, "But that takes time. This virus is so new. Normally trials take years or, if not, months and months to set up. We're racing against time here. I think the early trials are showing promise." He also noted that while "there are a lot of promising drugs, none are silver bullets. . . . and we'll see how like the combination of different drugs work together."

As of Tuesday more than 4.2 million people worldwide have been diagnosed with COVID-19, with nearly 290,000 of them dying, according to Johns Hopkins University & Medicine's COVID-19 map. These include more than 1.3 million people diagnosed in the United States, of whom more than 81,000 have died. Speaking to Salon in March, Haseltine argued that Trump's response to the crisis had made things worse.