"How is that based in science?": Fox hosts without medical backgrounds question top disease expert

Do Fox hosts Tucker Carlson, Sean Hannity and Laura Ingraham suddenly care about science—or are they attacking it? 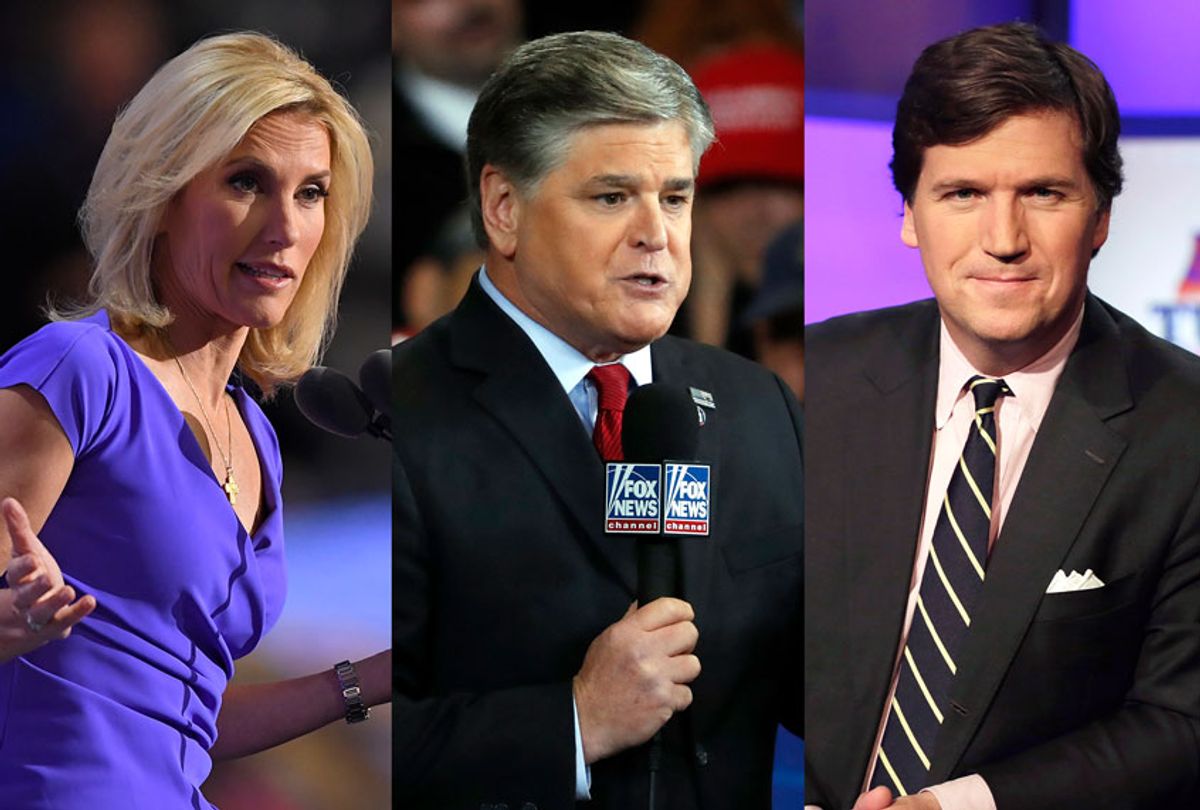 Carlson, who like his Fox News colleagues is a political commentator with no medical background, questioned the science behind Fauci's testimony earlier in the day before a panel of top U.S. senators.

"Fauci says that children must stay home or countless people will die — that's the message. So I'm going to ask a very simple question: How does he know this, exactly?" Carlson asked. "Is Tony Fauci right about the science? Do we have any particular reason to think he is right?"

Ingraham also criticized Fauci's knowledge base in the context of school reopenings, playing a clip of him telling senators: "The idea of having treatments available or a vaccine to facilitate the reentry of students into the fall term would be something that would be a bit of a bridge too far."

"Parents across America let out a collective gasp," Ingrahm, who is not a doctor, alleged. "How is that based in science?"

Fauci has led the National Institute of Allergy and Infectious Diseases for nearly four decades, including during the HIV/AIDS epidemic.

Carlson mocked Fauci's warning about the impact on children, claiming the virus was somehow "being used to deny children an education."

New York, which is the hardest-hit state in the nation, recently sounded the alarm about a mysterious children's disease linked to the novel coronavirus.

Calson also accused Fauci of being power hungry as he claimed that the doctor must be "pleased" with the fact that people are "following his orders."

"He didn't expect to have this much power at the age of 79," the Fox News host said of the doctor.

In response to a guest who criticized the country's "unelected, educated elite who, empowered with this belief in scientism, was somehow going to lead us to utopia," Carlson said Fauci was "the chief buffoon of the professional class." He also referred to some of Fauci's comments about shaking hands as "buffoon-level stuff" earlier in the program.

Fauci, who works for the National Institutes of Health and does not set policy at national, state or local levels, has become a punching bag for President Donald Trump and his allies. In an effort to displace criticism of the president, these allies — who include numerous Fox News personalities — have pushed increasingly-paranoid conspiracy theories about an alleged "deep state" plot. They feature the diminutive Fauci as metonym for authoritarian control, while simultaneously offering junk counter-narratives as soothing pablum.

"This is not the result of any kind of democratic process at work at all," Carlson said. "Yet, in the last four months, Dr. Fauci has become one of the most powerful people in the world."

"Some — particularly in our media and in our Democratic establishment — are clamoring to give Dr. Fauci even more power," the Fox News host added. "Why? Some people think that he should be dictator for the duration of this crisis."

This is not the first time the trio of hosts have targeted Fauci. Carlson claimed last month that the doctor was prescribing "national suicide" as he proclaimed that the economic fallout from public health protocols was "a far bigger disaster than the virus itself, by any measure" and the "response to coronavirus could turn this into a far poorer nation."

Hannity, who has contradicted Fauci on a number of occasions was a little softer than Carlson on Tuesday, mainly going after Democrats. A recent study found that  "greater viewership of 'Hannity' relative to 'Tucker Carlson Tonight' was strongly associated with a greater number of COVID-19 cases and deaths in the early stages of the pandemic."

"The left is now waging a non-stop campaign of fear — hysteria — despite declining COVID-19 infectious rates, hospitalizations, deaths. Well, Democrats, the mob and the media — they seem to want to keep this country locked down indefinitely," he falsely claimed. "Dr. Anthony Fauci also seems to favor with the Democrats want, and that is massive restrictions with no end in sight."

Hannity then played a clip of Sen. Rand Paul, R-Ky., criticizing Fauci during the hearing for allegedly thinking he was "the end-all." Fauci replied that he "never" made myself out to be as much.

The Fox News host said the doctor should be credited for his life's work, but with a caveat: "There is no secret that he, like so many others, have been wrong a lot."

Hannity has pointed to a January interview with Fauci as a response to criticism of his coronavirus coverage. The interview, Hannity said, allegedly proved his viewers got accurate information from the beginning. But that recent research found Hannity's viewers were more likely to die from COVID-19 than those of Carlson.

"The selective cherry-picked clips of Sean Hannity's coverage used in this study are not only reckless and irresponsible, but down right factually wrong," a Fox News spokesperson said in a statement. "The 'study' almost completely ignores his coverage and repeated, specific warnings and concerns from January 27-February 26 including an early interview with Dr. Fauci in January. This is a reckless disregard for the truth."

Ingraham also went after Fauci by way of Joe Biden, the presumptive Democratic presidential nominee to take on Trump, claiming that he would turn to scientists for advice in their areas of expertise if elected. Such a deference to scientific facts would somehow make Americans "poorer and less free," according to the Fox News host.

"But what Biden seems to be saying — if you can unpack it — is that he would farm out critical decision-making to others like Dr. Fauci and other unnamed scientists," Ingraham said. "Now, while the idea of rule by the expert class may be appealing to people like George Stephanopoulos and others in the media . . . in the end, it would mean that Americans would be poorer and less free. No work unless it's improved by experts. No worship services. No ball games. No concerts. No travel to see your family or friends. Not at least until we have a vaccine."

"With all due respect to Dr. Fauci's expertise, no one elected him to anything," she said. "There are devastating consequences of keeping children away from school for extended periods of time, especially at-risk children . . . So do the experts in medicine think about the risks to children and to parents, who — if they have to work as essential employees — they can't work as tutors or nannies."

Ingraham, who recently floated the bizarre theory that face coverings were a deep state plot to control Americans, warned that Democrats were "remaking America under the veil of a virus" and staging "a naked power grab in the middle of a pandemic."

Beside a graphic of Fauci's face, she said: "Lock down until the experts set you free."

Following the hearing and subsequent attacks, Representative Liz Cheney, R-Wy., felt compelled to defend Fauci, tweeting on Tuesday that he was "one of the finest public servants we have ever had. He is not a partisan. His only interest is saving lives. We need his expertise and his judgment to defeat this virus. All Americans should be thanking him. Every day."

Cheney did not say whether something in particular had prompted her tweet.