Update: We know Reade faced check-fraud charges around the time she left Biden's office. But is that relevant? 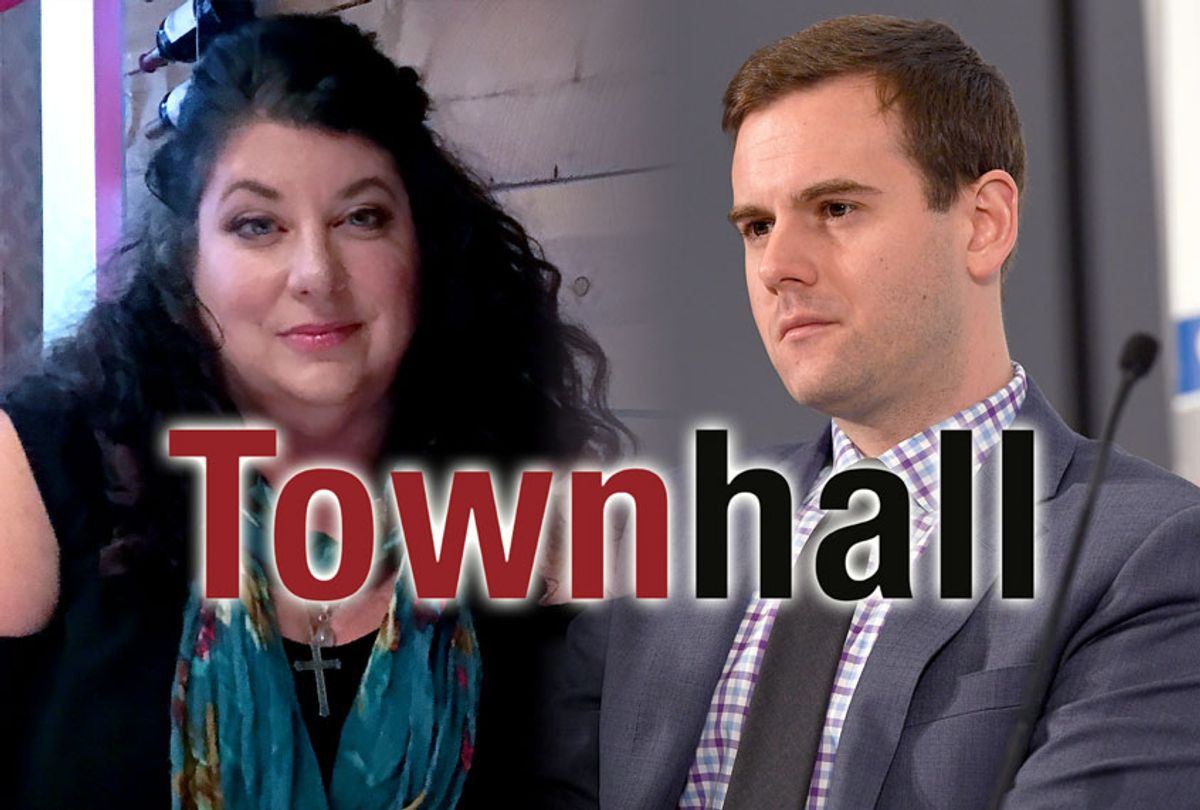 This story has been updated since its original publication. It now includes the San Luis Obispo district attorney's confirmation of the 1993 misdemeanor charge against Tara Reade, as well as the full contents of the email chain discussed herein. The headline has also been updated to reflect this new reporting.

Last week, Guy Benson — a Fox News contributor and conservative talk radio host, as well as political editor of Townhall — published an article in Townhall headlined, "Court Records: Biden Accuser Tara Reade was Charged with Check Fraud Days Before Leaving His Senate Office." That article's central claim was based on an email chain with an officer of the San Luis Obispo County Superior Court in California.

Salon has since learned the court official's statements in the email were edited, and did not corroborate Benson's central claim, although county officials have since confirmed the charges against Reade in 1993. (See update below.)

According to California court records, Tara Reade — the woman who has accused former Vice President Joe Biden of sexually assaulting her 27 years ago — was charged with misdemeanor check fraud just days before she left the then-Senator's office in the summer of 1993. The charge in question was filed on August 2, 1993, according to emails from an official working at the San Louis [sic] Obispo County court, obtained by Townhall.

Benson then includes an update, addressed later in this article.)

First, here are the quoted emails: 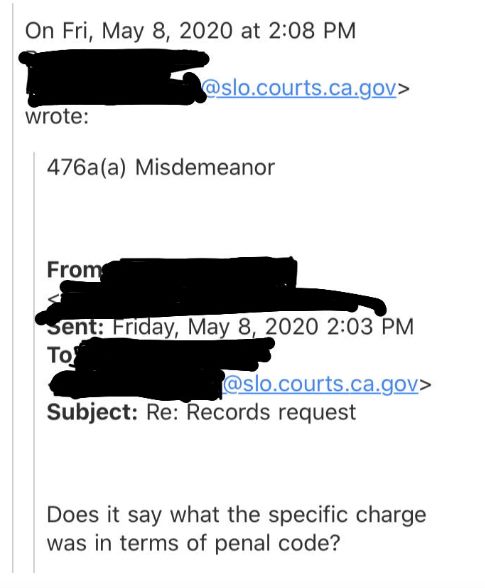 "The email chain with the court official reveals that the since-purged charge was a "476(a) a misdemeanor, [sic]" Benson writes.

But when Salon contacted the court to confirm the report, the court officer in the cited email chain could not confirm the charge against Reade, and said the information in the email had not come from the court, but had been relayed as coming from an outside media source.

"That person edited the email in which I said that an outside reporter informed me of the penal code charge," the officer wrote.

The court officer told Salon that the charge in question — an apparent misdemeanor involving a bad check or checks — had been purged from court records, and that no information about it is available. "Once the case is purged there is no way to find out anymore."

The court is not able to confirm or deny the specifics of the charge, the officer said. (Since then, San Luis Obispo court officials have confirmed the existence of the original charge. See below.)

It is unclear whether Benson altered the email himself or obtained the altered email from another source. According to a conversation with the court officer, a larger crop of the screenshot would have revealed more.

"He left off an email that I stated that another media agency provided the information to me. I can't access anything," the court officer wrote in an email.

The only official court communication cited in Benson's report cites is a notice informing the petitioner that an unspecified criminal charge had at some point been purged from Reade's record.

The court officer read that email exchange to Salon and shared a screenshot of the alleged charge that the outside reporter — who identified himself as "Luke" — wanted the court to verify.

Benson's report did not include the screenshot of the charge, which has circulated on Twitter in recent weeks. It alleges that Reade — who has accused Biden, now the presumptive Democratic presidential nominee, of sexually assaulting her in 1993 while she was a staffer in his Senate office — committed check fraud around the time she left his office. (Again, see the update and clarification below.)

Reade's allegations against Biden have sharpened significantly over the past year, from improper touching and sexual harassment to forced digital penetration. The resulting controversy has ignited a firestorm of debate in political and media circles, with some commentators suggesting Biden should withdraw from the presidential race and prominent Democrats largely standing behind him. Biden has categorically denied the assault.

In the first update to the piece, Benson links to a Twitter thread by Ryan Grim, D.C. bureau chief at the Intercept, one of the first journalists to cover the Reade case. Grim wrote that Reade's attorney, Douglas Wigdor, told him that Reade had "paid this off and the charges were dropped."

Wigdor said that wasn't true. "I didn't tell him that," he told Salon in a phone interview. "What I told Grim was that I had been called by another reporter who indicated he had confirmed that the case had been dismissed by way of a payback of this bad check and some small court costs. It was dismissed, according to this reporter, on Sept. 3, 1993."

"I wouldn't say that I could confirm it or that my client could confirm it, because my client doesn't have a recollection," Wigdor continued. "She's not denying it — maybe it did come in and she paid it back — but she does not recall this happening."

Benson quotes Wigdor in an addendum to his Townhall article, identified as "UPDATE II":

I just spoke with Reade's attorney, Douglas Wigdor. He told me that his client's departure from Biden's office "had nothing to do with her termination because she had already left the office, in July [of 1993]. She was paid through that date [August 6th]," as indicated in the document she tweeted. Reade has speculated that she was terminated as a form of retaliation against her internal complaints regarding mistreatment.

Even after further clarification (see below), very little about the charges against Reade in San Luis Obispo County in 1993 is clear, and the same goes for the scramble to track down a contemporaneous complaint Reade says she filed in the Senate, alleging that misconduct in Biden's office had made her "uncomfortable." Reade has said the complaint did not mention sexual assault and did not name an individual, so it would neither corroborate nor disprove her central allegation.

After Biden's denial during an interview with MSNBC's Mike Brzezinski, Reade backed out of interviews with CNN and Fox News and retained Wigdor as her attorney. He is a conservative and Trump supporter who gave a combined $55,000 to Trump's 2016 campaign and the Republican National Committee. Then Reade sat down for an exclusive interview with Megyn Kelly, the former NBC and Fox News host, who has said she was sexually assaulted by the late Roger Ailes, the founder and former CEO of Fox News CEO.

Just to complete the circle of confusion, Wigdor has been involved in several lawsuits against Fox News, where Benson is a regular contributor.

Neither Benson nor Townhall replied to Salon's requests for comment.

UPDATE, May 14, 2020: In an email obtained by Salon after original publication of this article, San Luis Obispo District Attorney Eric J. Dobroth confirmed the 1993 check fraud charge against Tara Reade. Here is the text of that email:

In San Luis Obispo County Municipal Court case number M000203979, Tara Reade (2-26-64) was charged with a misdemeanor violation of California Penal Code section 476a(a) for an incident that took place on or about August 8, 1992. She was not arrested, but a letter notifying her that charges were filed was sent on or about July 30, 1993. I cannot determine what address that letter was sent to. The case was ultimately dismissed. I cannot tell what date the case was dismissed on or why it was dismissed.

It should be noted that we cannot confirm that Ms. Reade was actually notified of the charges as our electronic records only indicate a letter to appear was sent. We do not have any physical records of the case.

Salon also obtained a copy of the full email chain between the San Luis Obispo court official and the journalist who initially provided the emails to Benson. The chain shows that after the court officer told the journalist details of the charges, the officer then said that information did not come from the court itself, but reflected what "another agency provided me from the internet."

"Got it, thanks," the journalist replied.

The journalist told Salon that "another agency" was understood to mean another law enforcement agency. That person considered the matter resolved, and shared the email with Benson.

Benson's story, however, cites the court itself as source of confirmation, which the court officer says is incorrect.

In a follow-up email after original publication of this article, the journalist in question asked the court officer to clarify the problem with Benson's article.

The officer responded, "That was incorrect and I don't appreciate you publishing the email without my permission and leaving out the part [about the other agency]. I have no information on the case and you made it seem like I did .... Another media agency provided the information not another law enforcement agency otherwise I would have stated that."

When asked about the now-confirmed charge of check fraud, Reade's attorney Doug Wigdor said it was "a non-factor," because by the time that charge was filed, Reade had already left Biden's Senate office.