America's indifference to death is nothing new: But it's made this crisis much worse 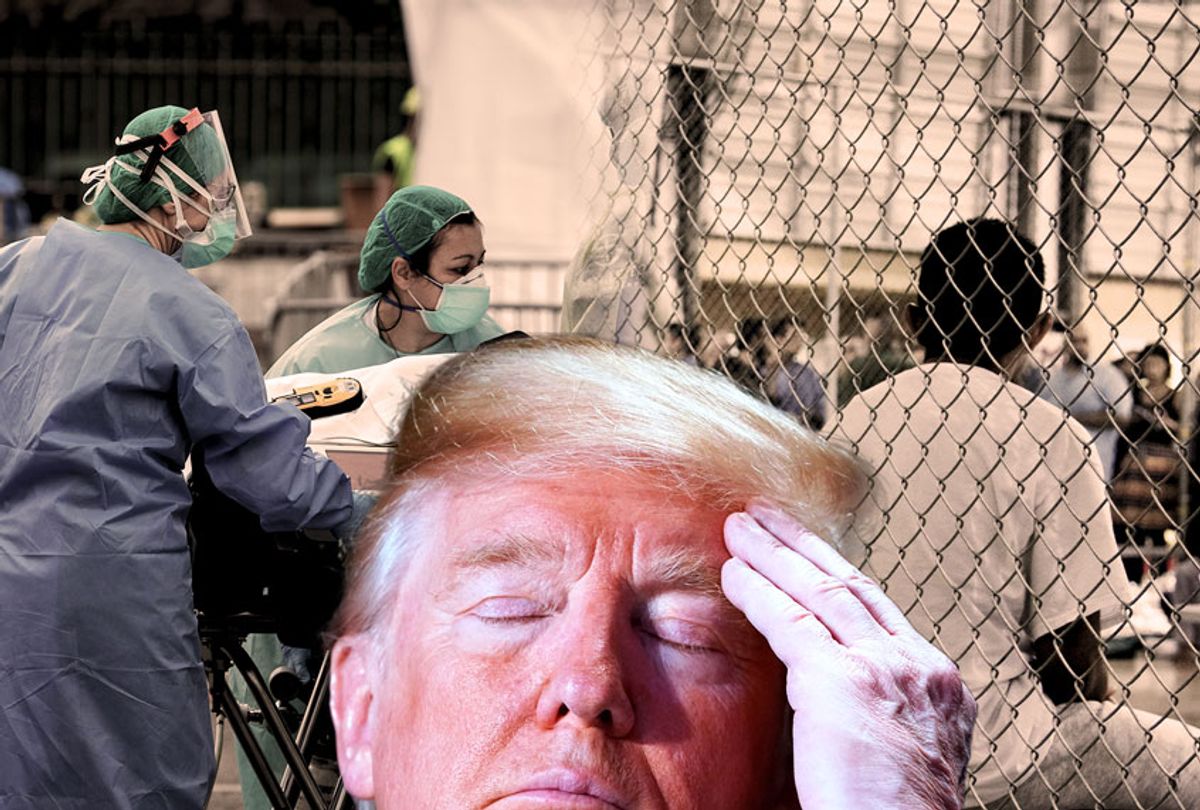 Donald Trump | A disaster response team will provide medical care during the novel coronavirus pandemic | People who've been taken into custody related to cases of illegal entry into the United States, sit in one of the cages at a facility in McAllen, Texas (Photo illustration by Salon/Getty Images/AP Photo)
--

American culture has always demonstrated a callous indifference to death. At our nation's inception, its triumphant rhetoric of equality and democratic revolution excluded any acknowledgment of slavery, or the genocide conducted against its Native population. Over the past two centuries, America's history of uninterrupted war, conquest and exploitation bred into the public too much comfort with the consequences

Fighting for "freedom" during the Cold War meant sponsoring death squads in Indonesia, Iran and numerous Latin American countries. The people of Vietnam, Iraq and Afghanistan learned, through blunt-force trauma and high-tech methods of murder, that American support of democracy is often more a threat than a gift. Noam Chomsky has often remarked on the "hierarchy of victims" that exists in American politics and press coverage of current events. To use a recent example, four dead Americans in Benghazi have value (as of course they should), and lead to a series of Congressional investigations, political debates and fictionalized Hollywood tributes. Hundreds of thousands of dead civilians in Iraq, however, are unworthy of even passing mention from political leadership.

The Rev. Martin Luther King Jr. was one of the few American leaders to draw political and moral connection between the violence the U.S. commits overseas and the death and deprivation that happen routinely at home.

In a 1967 speech offering thunderous condemnation of the "three great evils of society," King warned against the consequences of "racism, war and poverty."

"A nation that continues year after year," King said, "to spend more money on military defense than on programs of social uplift is approaching spiritual death."

King understood that even within America's own borders there was (as there still is) a hierarchy of victims. From impoverished urban neighborhoods to desolate Native American reservations, millions of Americans suffer with disease, trauma and privation while the society around them endlessly boasts of its wealth and greatness.

The indifference of American power, its proactive right-wing enablers, and its apathetic middle and upper classes has constructed a society where certain deaths take place on the margins, out of sight and out of mind. This becomes noticeable — to those who are paying attention — when the time comes to allocate resources in a local, state or federal budget, or to craft policy in a moment of crisis.

For all of President Trump's self-pity about the bias of the media, mainstream institutions of journalism have largely ignored or forgotten his worst acts of cruelty and criminality. As broadcast analysts break down the mindless minutiae of Trump's Twitter feed, families attempting to escape poverty and persecution sit in cages near the Mexican border.

The Trump administration's barbaric border policy of family separation has disappeared from political debate, even as Benjamin Ferencz, the last living Nuremberg prosecutor, has called it a "crime against humanity." Legacy media outlets have reported, in fairness, that many children held in border detention centers have complained of malnutrition and sexual assault. But this systematic abuse has barely registered on the radar of Trump's daily misdeeds and embarrassments.

After a 2017 hurricane devastated Puerto Rico, the Trump administration withheld disaster relief aid for three years, finally releasing the funds this January, but with severe restrictions on local officials' ability to provide aid to suffering citizens. Casually allowing thousands of Puerto Ricans — who are U.S. citizens, a fact Trump and his supporters seem to forget — to starve or die of preventable disease passes with little comment from the press or the Democrats.

Hanging over everyone's head, like a chandelier in a ceiling about to collapse, is the danger the climate crisis presents to our entire planet. Rising global temperature affect not only severe weather events like Hurricane Maria but also the ever-worsening wildfire seasons of the West Coast and Australia, and ecological destruction that is killing many species vital for sustaining life.

With characteristic idiocy, Trump has variously called climate change a "hoax" and a "scam." His own Department of Transportation took a different view in 2018, predicting in an official report that the global temperature will rise by seven degrees in the next 80 years — an increase that might well mean the end of the human species, among many others. Did that mean the Trump administration would embrace the Green New Deal proposals floating in Congress? Of course not. Since Obama-era standards hadn't made a significant impact on carbon emissions, the report argued, we might as well do nothing.

The Department of Defense has consistently warned that climate change presents an existential threat to American life. Leaked Pentagon documents have recently revealed that for years both the Obama and Trump administrations allowed the U.S. war in Afghanistan to continue with no clear purpose. Continued death, injury and destruction had no meaningful effect on foreign policy deliberations at the highest levels of government.

How have most Americans reacted to these reports about the likely consequences of climate change, or the pointless carnage inflicted in their name? With barely a sigh.

Reports of death now dominate the headlines. More than 88,000 Americans have died from the coronavirus, and public health experts agree that the end is not in sight. No matter how much our society discriminates, a virus observes no social or economic boundary. Sen. Rand Paul, movie stars Tom Hanks and Idris Elba and the president of Harvard have all contracted COVID-19. But as is always the case, the poor — who in our country are disproportionately black and brown — are suffering the most extreme cases at the highest rates.

In Chicago, black people are roughly 30 percent of the city's population, but account for 72 percent of coronavirus deaths. Only 14 percent of Michigan residents are black, yet black people comprise 40 percent of COVID-19 fatalities in the state. Centers for Disease Control statistics indicate that these disparities are across the country.

Abigail Echo-Hawk, chief research officer of the Seattle Indian Health Board, said that due to this racial misclassification, "there will absolutely be a gross undercount of the effects of COVID on American Indian and Alaska Native peoples."

After centuries of terror inflicted on black and Native people on this continent, their poverty and premature deaths barely affect the political calculus. It is a tragic inevitability that they will feel the most pain and count the most losses in America's current public health crisis.

Dangerous and reckless demands for school, commerce and public events to immediately and fully "reopen" are closely connected with the racial disparities of this pandemic and its consequences. It is only because most of the victims of "reopening the economy" are low on the American hierarchy of victims that Georgia Gov. Brian Kemp, Texas Gov. Greg Abbott and President Trump can comfortably demand that the American people volunteer as tributes to stabilize corporate profits and stock prices.

Right-wing leaders and commentators attempt to manipulate their followers with the presentation of a false dichotomy: risk or starvation, as if those were the only choices available. Sens. Kamala Harris, D-Calif., Ed Markey, D-Mass., and Bernie Sanders, I-Vt., have introduced a bill that would provide every American with a monthly payment of $2,000 for the duration of the pandemic. Reps. Pramila Jayapal, D-Wash., and Joe Kennedy III, D-Mass., have proposed that every American currently without health insurance can obtain coverage and care from Medicaid, with no questions asked. Neither of these proposal has even provoked a floor debate.

The most salient example of American power's insistence on human suffering is Trump's decision to implement the Defense Production Act to mandate the continued operation of meatpacking plants, even without personal protection equipment or remotely adequate virus testing. Pushing a powerless and largely immigrant workforce onto the "killing floor," to use Howlin' Wolf's memorable phrase, is symbolic of Trump's political strategy, and of American culture's historic disregard for death.

If the death rate continues to disproportionately concentrate among racial minorities and the poor, Trump and his right-wing brethren will observe the long-running tradition of ignoring the suffering of low income, nonwhite Americans. For centuries the amplification of dehumanizing stereotypes — they are "lazy" and "shiftless," with "criminal tendencies" — has allowed the privileged classes to behave as if the pain and death of their neighbors and fellow citizens is unworthy of their attention.

This Trump strategy may yet prove effective, especially when coupled with another hallmark of American politics — the scapegoating of a foreign villain. To cover for his murderous ineptitude, Trump has tried to shift focus to China as responsible for the severity of our coronavirus pandemic. This position is totally incoherent, but that may not matter if enough of us fall into the pattern of seeking a redemptive escape hatch for "American exceptionalism": Nothing is ever our fault. It must have been the foreigners.

Since Trump does not even remotely resemble a lucid or sensitive human being, it might seem tempting to regard him as an irrelevant anomaly. But to overlook the suffering of black and brown people here at home, while blaming an exotic enemy for our own society's failures, is evergreen in the "greatest country in the world."

The murder of Ahmaud Arbery emerges as an instructional metaphor for the country struggling to navigate an unprecedented catastrophe.

As many readers will know, Arbery, a 25-year-old U.S. Army veteran, went for a jog in the middle of the afternoon in Brunswick, Georgia, on Feb. 23. Gregory and Travis McMichael, a white father and son, claim they suspected Arbery of several home burglaries in the neighborhood. In fact, evidence shows there had been no recent break-ins.

The McMichaels confronted Arbery without cause, accosted him and eventually shot him dead in the street. A video captured the entire incident, yet local police did not arrest either suspect until May 7. As the Rev. Jesse Jackson wrote in the Chicago Sun-Times:

Local law enforcement had video evidence of the crime. Yet no arrest was made until 74 days later, two months and two weeks after the murder. Local authorities chose not to act. Two U.S. senators said nothing. The white church — that had blessed slavery, segregation, apartheid in South Africa — was silent.

Confronted with murder, the white power structure of Brunswick, Georgia, did nothing. Not until public release of the video, and mass outrage from the public, did local officials file charges against Gregory and Travis McMichael.

Left to its own devices, American authority will choose power and protection of its own over the humanity of the citizens it is morally and constitutionally obligated to serve.

In 1989, Neil Young released his most famous song, "Rockin' in the Free World." The blazing fury of Young's distorted guitar sounds like a demolition derby before he sings about homeless men suffering in squalid alleys and drug-addicted single mothers leaving their babies in the trash. The chorus rings out with an odd and disturbing optimism of obliviousness: "Keep on rockin' in the free world!"

Jared Kushner, Trump's soulless son-in-law, who is supposedly running the internal White House "shadow task force" on the pandemic, has predicted that by July the nation's economy would "really be rocking again."

This is almost certainly wishful thinking in economic terms, and public health officials have countered that to "rock again" will risk massive increases in infection and death. American history teaches us that, without public resistance, death won't slow the greed and lust of the most powerful.