Despite their rivalry, both nations have struggled under the weight of oligarchy to mount a humane response 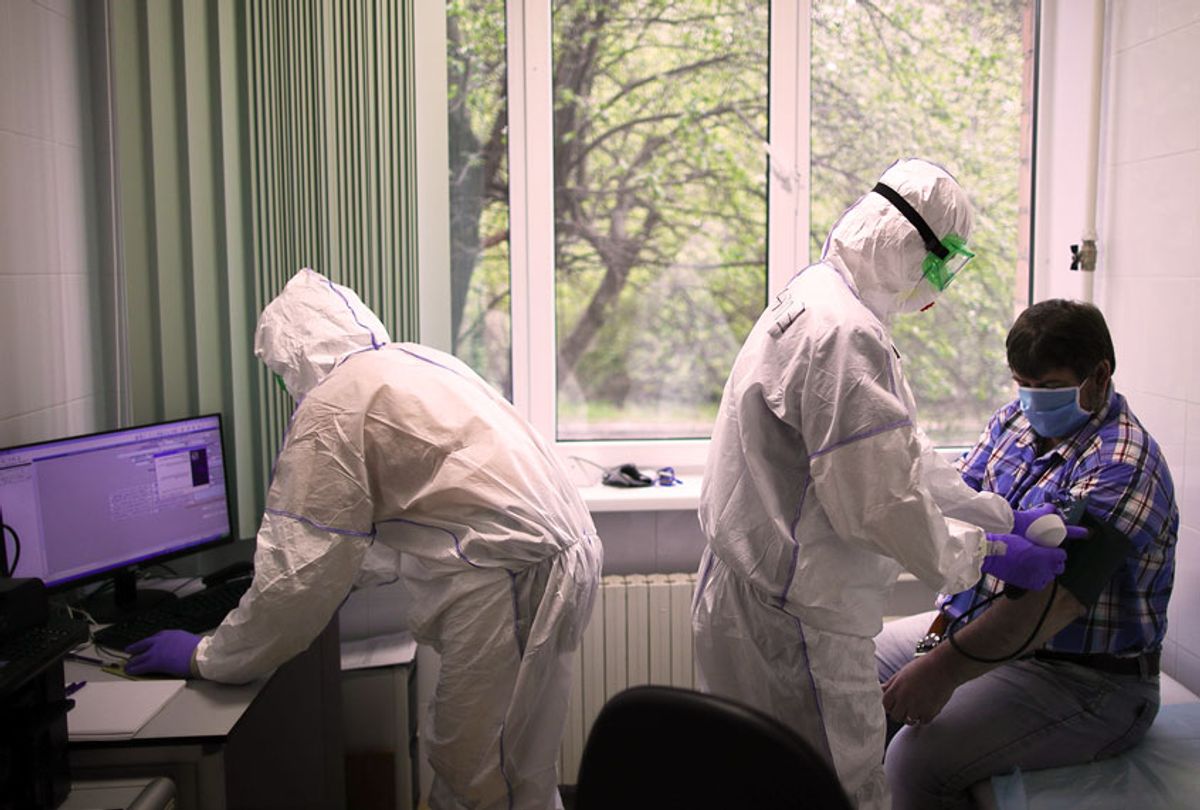 Employees and a patient at the Federal Clinical Center of Higher Medical Technologies of the Russian Federal Medical Biological Agency that treats COVID-19 patients, patients with suspected coronavirus and patients with viral community-acquired pneumonia. (Sergei Bobylev\TASS via Getty Images)
--

For obvious reasons, the word "Russia" has dominated American headlines since the beginning of Donald Trump's presidency. Many who opposed Trump believed that Russia's election interference helped Trump win the 2016 presidential election; whereas many Trump supporters believed that Democrats were using a half-baked scandal as an excuse to delegitimize their opponent and lick their wounds after an unexpected electoral defeat.

Thus, decades after the end of the Cold War, Russophobia once again became the American zeitgeist, the butt of jokes on late-night shows and in op-ed page comics. That ended with the global pandemic, when more pressing concerns took over and Russia receded from the minds of most Americans.

That is unfortunate, as there are many ways in which Russia's response to the coronavirus crisis mirrors our own nation's response. And understanding both countries' public health crises reveals some harsh truths about how similar the two nations are — both culturally and in terms of governance.

The saga of Russia's pandemic response began on a positive note, as the nation appeared, at least initially, to be slow to suffer from the virus's spread. Aside from a single Chinese national being treated in Siberia, no coronavirus cases were reported on Russian soil in all of February. On March 1 President Vladimir Putin proclaimed that the situation was "entirely under control."

Before March was over, however, Russian coronavirus cases exploded: confirmed cases in the country rose exponentially, jumping from 495 on March 24 to 10,131 as of April 7. As of Friday morning on May 15, there are more than 262,000 confirmed cases in Russia — the country lags only the United States in terms of total number of infected — and at least 2,400 fatalities. A disproportionate amount of patients are in Moscow.

Still, not everyone thinks Russia's pandemic accounting is reliable.

"I think those statistics were just absolutely untrue," Bill Browder, a British financier and political activist who became one of Putin's most prominent enemies after he blew the whistle on alleged corruption in that country, told Salon earlier this week. "You basically can't trust anything that the Russian government says. And they're always looking for an angle. It wasn't clear what they were trying to achieve by saying it wasn't hitting them. Now they seem to be presenting an accurate number of cases, but they're still wildly undercounting the number of deaths."

Curiously, this mirrors much of the coronavirus reporting in the United States. As Bob Hennelly reported in Salon, first responders in New York reported seeing a tenfold increase in cardiac arrest deaths amid the pandemic — almost certainly caused by the coronavirus, but not reported as such in official statistics. Likewise, the state of Virginia has been miscounting cases, with the Virginia Department of Health facing criticism for aggregating diagnostic and antibody tests into the same data pool, thereby providing unreliable information about the coronavirus pandemic in the state.

Jonathan Katz, a senior fellow at The German Marshall Fund who directs the Frontlines of Democracy Initiative, told Salon that Putin's response to the crisis has been sub-par, to say the least.

"What we're seeing is that Putin is a tactician," Katz told Salon. "He is not a manager of good governance. And his approach to the coronavirus has been first to deny that it was there, and that it was as widespread, and that continues today. We're also seeing him unable to deal with the challenge of the coronavirus because of the weakness of Russia's healthcare system, its infrastructure."

Katz said that Putin has "largely faded into the background, to his villa, versus those that are on the frontline dealing with this challenge, including the mayor of Moscow and other regional leaders."

"This has really shown a real weakness in [Putin's] ability to govern," Katz added. Notably, the same was said of Trump by Dr. William Haseltine, a biologist renowned for his work in confronting the HIV/AIDS epidemic, for fighting anthrax and for advancing our knowledge of the human genome.

"He should have been warning us it was coming," Haseltine told Salon in March. "He should have been preparing by stockpiling all the necessary equipment. But even today we're not doing what we should do. Let me put it that way. What we should be doing is contact tracing [identifying people who may have come in contact with infected patients] and having mandatory quarantines for everybody who's been exposed. And quarantining not at home, but in hotel rooms, single occupancy hotel rooms."

The problems with the Russian health care system are magnified in this moment. As The Washington Post reported earlier this week, Putin has admitted that half of Russia's doctors had not been paid bonuses they'd been promised for working during the pandemic. Hospital workers frequently don't have the protective equipment necessary to safely work on patients, prompting some staff to walk off the job. Hospitals themselves have become major super-spreader sites, and at least 169 medical staff have died so far in Russia according to a memorial list created by Russian doctors (there is no official national count).

While there are no reliable statistics about health care workers in the United States, a CDC report in April estimated that more than 9,000 US healthcare workers have contracted the coronavirus and at least 27 have died from it. (The National Nurses United union reported that at least 48 nurses have died from the virus.)

According to the Center for Strategic & International Studies, the Russian federal government's response to the crisis has been "generally late and inconsistent." After describing how Putin was "largely absent during the early stages of the crisis" and eventually supported reforms including tax deferments for small-and-medium-sized businesses, increasing maternity capital for eligible families and urging Russians to listen to their doctors and abide by social distancing guidelines, CSIS noted that "the initial lack of clear direction from the Kremlin resulted in a stronger response at the regional and municipal level. So far, around 20 regions have adopted mandatory isolation measures." It also observed that "the city of Moscow and the surrounding Moscow Oblast have been at the forefront of the local-level response," pointing to how Mayor Sergey Sobyanin placed 2,500 people arriving from China under quarantine, restricted mass gatherings and imposed citywide quarantines.

The Russian government has implemented a number of fiscal policies to help the struggling country's economy, according to the International Monetary Fund. These have included allowing quarantined individuals to obtain sick leave benefits and sick leave pay until the end of 2020 that equals at least the minimum wage, providing unemployment benefits at least equal to the minimum wage for three months, increasing pay to frontline medical staff and health and safety inspectors and temporarily adjusting how people will have to pay rent to the government.

Such social welfare measures are greater than what the United States could muster, notably: A survey by the Federal Reserve Bank earlier this week found that roughly one-fifth of American workers would have no paid or sick leave of any kind if they or a family member was diagnosed with COVID-19. Many economists criticized the March relief legislation for not providing enough sick leave coverage to enough workers who might need to leave work and quarantine due to the pandemic. America has also come up short in terms of providing unemployment relief, with Americans only receiving $48 billion in unemployment benefits in April when they could have received more than $90 billion if there had not been administrative delays and other problems.

Putin's seemingly lackluster performance has met with criticism from his domestic political opponents. Russian political activist Alexei Navalny — one of the nation's most prominent critics of the Putin regime, as well as his potential opponent in the 2018 presidential election (the Putin regime ultimately thwarted his efforts) — wrote that "Putin's logic" is based on how "almost the entire economy is the state. State employees, employees of state-owned companies and large 'controlled' companies will be paid their salaries. The rest — all sorts of designers, lawyers, taxi drivers, waiters, and so on can be sacrificed."

The Russian government has been fighting back against some of the media's unflattering characterizations. Russia's US ambassador demanded earlier this week that The New York Times retract a story claiming that they had undercounted their coronavirus death toll. The Russian embassy in Britain did the same thing with the Financial Times, claiming that the death toll was 70 percent higher than the country's official statistics. Last month Kremlin Spokesman Dmitry Peskov said that the government was trying to stop "fake news" that would incorrectly describe the government's response to the crisis.

Yet even with the Russian government's attempts at PR damage control, it isn't difficult to see the parallels between their response and that of the United States. America's health care system has also struggled immensely to deal with the influx of patients caused by the coronavirus pandemic. The U.S. has also relied more heavily on its governors than the president in addressing the crisis. Trump, as is well known, cut the Centers for Disease Control and Prevention's budget for preventing global disease outbreak by 80 percent in 2018 and ignored warnings from experts during the early period of his presidency. Like Putin, Trump also claimed that we had the virus "totally under control," doing so two days after the first coronavirus case had been confirmed in the U.S. (on January 20). Trump ultimately did not acknowledge the severity of the situation until March 17, nearly two months after the first confirmed case in this country and one week after he told the public that the virus "will go away."

The bottom line here is simple: When you brush aside all of the melodrama and scandal that surrounds much political reporting, the most important details are those that involve the implementation of effective policies to address real crises. Because we know so little about what's going on in Russia, it will be difficult to say conclusively just how they erred, although the early signs do not look good. Yet we know enough about how Trump and Putin faded into the background and denied the early implications of the outbreak to have learned something important. Regardless of the exact nature of their relationship with each other, Trump and Putin mirrored each other in ways that were highly unfortunate for their people when they were in most urgent need of strong leadership.