Being stuck with someone can be the best, or the worst, or both, and this show plays that out with lots of soap 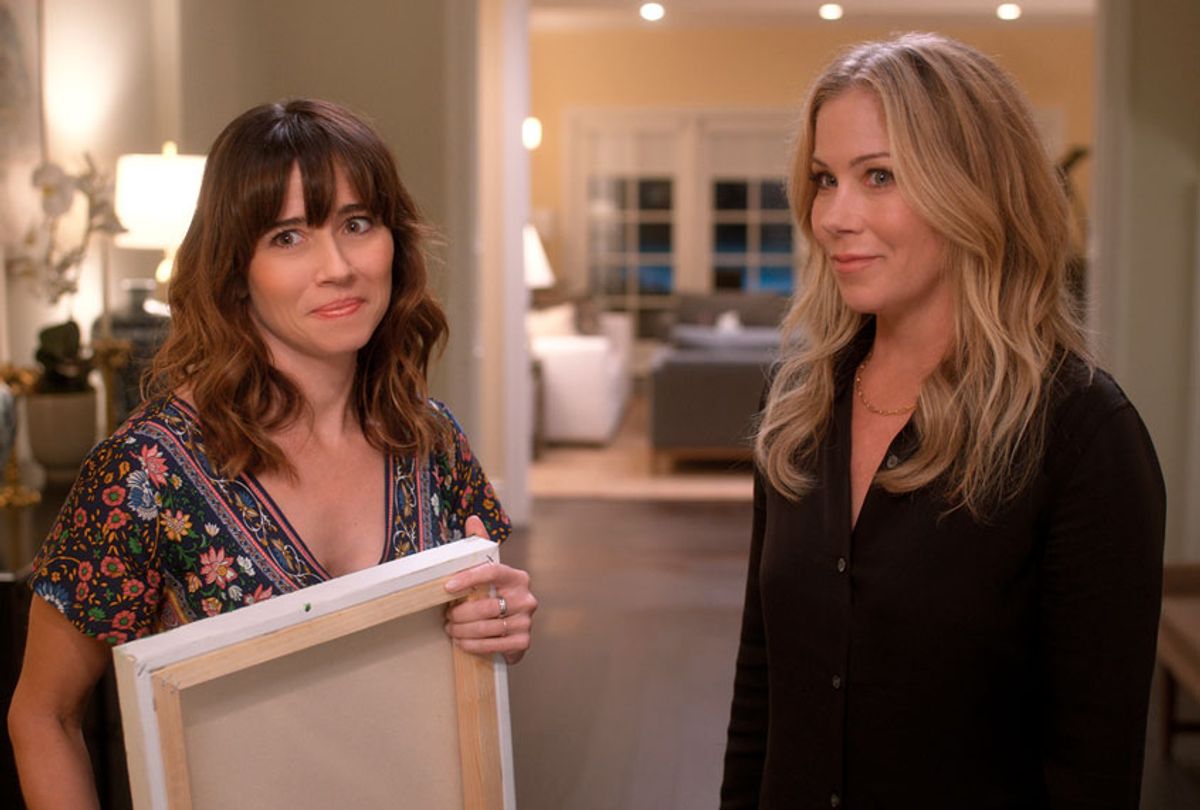 Linda Cardellini and Christina Applegate in "Dead to Me" (Netflix)
--

Spoiler alert: This story discusses important twists and plot details of Netflix's "Dead to Me" Season 2. If you're not caught up and don't want to be spoiled, stop reading right now.

Midway into the second  season of "Dead to Me," Linda Cardellini's Judy Hale excuses herself from a conversation she's having, retreats to a nearby bathroom, shuts the door and begins furiously slapping herself in the face. Judy is a creature of kindness, perpetually forgiving others for their small slights and hefty slams.

She's too nice, her best friend Jen Harding (Christina Applegate) often tells her, but like most people accustomed to being ground down to a nub emotionally, it's tough to believe it when people who care about her say nice things.

But instead of excavating the psychological depths of Cardellini's character, let's examine this moment alone, divorced from the context of the series' initial mystery and the mysterious death that colors the second season. That moment contains one of the purest expressions of private frustration I've seen in a long time.

She does something similar later on, beating her own chest in an act of contrition while Applegate physically prevents her from doing something both will regret. But the image of that first instance sticks in the brain, an internalized GIF that's likely been externalized by someone somewhere to illustrate exasperation, disappointment, the agony of being stuck. In the broad gallery of moving pictures that capture the silent irritation with stay-at-home living, Cardellini's private outrage is a strong contender for Best in Show.

Kids getting on your last nerves? Spouse lingering too closely for comfort and getting a bit lax in his or her sartorial habits? Welcome to your small-screen escape.  As of Wednesday morning, "Dead to Me" was Netflix's most popular original series, according to the service's list of top-rated titles, and the fourth most popular title overall.

Considering how well the series' first season caught on, its staying power at the top of the streaming service isn't completely surprising. Series creator Liz Feldman constructs the series as an exemplar of the service's binge model, revealing one twist after another in bites lasting 30 minutes or so and setting up each of the season's 10 episodes to end on a cliffhanger, saving the most dramatic for the finale.

Season 2 would have been highly anticipated and heavily consumed no matter what, given the way the first round of half-hours closed out. We shouldn't discount the vicarious relatability of Jen and Judy's shared predicament, though  – not the tit-for-tat crimes with which they wrong one another, but the fact that they're stuck together.

Much of the important action in "Dead to Me" takes place inside Jen's place, which she shared with Judy enthusiastically at the start of the first season, and reluctantly at the beginning of the second.

(And here is where you should stop reading if you haven't watched "Dead to Me," don't want to be spoiled, and somehow saw fit to ignore the warning at the point of this story.)

The entirety of the first season revolves around Jen's grieving the loss of her husband who was suddenly killed in a hit-and-run while jogging, and Judy ostensibly mourning the death of her fiancé, a high-powered attorney named Steve Wood (James Marsden). Jen and Judy meet in a therapy group, bond quickly and passionately, and don't question the haste of their friendship's forging until a few secrets begin to spill out – starting with the fact that Steve is very much alive, highly volatile, and hunting for Judy, not to mention in deep trouble with the Greek mafia.

The first season ends with Steve floating facedown in Jen's pool. Season 2 picks up directly in that moment but makes it even weirder when a very jovial Steve lookalike shows up at Jen's front door. Marsden was already revealed to be popping up in this new season, although I'm guessing that the semi-identical twin gambit didn't cross anyone's mind. Anyway, we soon get to know Ben, the light to Steve's darkness, the healing balance to his brother's destructive impulses: a dorky but still impossibly good-looking chiropractor.

Such is the big trick of this second round of episodes, revealing "Dead to Me" to be a high-class soap opera instead of just merely a highly watchable if a tad thinly plotted dramedy, though one admirably propelled by Applegate's and Cardellini's outstanding charms. Both in composite and individually, these stars create for us an easily digestible treat, and this is precisely what so many of us crave right now.

It's impossible not to notice how much "Dead to Me" runs on women's emotions – Jen's, Judy's, and the other women in their lives. A major twist is resolved, at least temporarily, by an auxiliary character succumbing to her own feelings of despair and loss and empathizing with one of the main characters despite her better judgment and obligations. This sort of resolution only works in a telenovela, but it's also more acceptable to an audience softened up by the psychologically enervating blow after blow of terrible news and mass irrationality.

Judy finds some version of comfort and regulation by hitting herself with her fists, and perhaps to someone trapped in a small space, that type of catharsis is understandable.

She's consistently supportive, even mothering Jen and her boys in ways that Jen finds smothering. (There are reasons for this behavior that are explained in the course of this latest season.)

And Jen tries to push Judy away several times over the course of the series and always finds reasons to welcome her back. They drink to much, quite often during the day, to cope with crises stacking atop one another like cordwood.

"I need two minutes when I don't feel like the f**king walls are caving in on me," Jen blurts to Judy in a frantic admission. There's a concrete reason for her saying this, but at the same time, maybe a part of us wants to save that quote for later.

Naturally this statement is directly followed by another potential derailment, because that's just how life is going these days. Just when things look bad, worse comes strutting around the corner.

Eventually, "Dead to Me" saunters from the darkness of interior conflict into lighter spaces. Jen's backyard pool is a feature millions of folks trapped in apartments would kill for. The buddies live in a beach community, something the set designers and directors of photography never let the audience forget. It's a hopeful nod at the idea that despite their messes they're navigating, they're only a short drive away from sand and the sea. Something important also occurs in a secluded part of the woods, but we don't see what that is at first, only how it affects Jen and Judy – which they process indoors, at Jen's relatively comfortable kitchen counter.

At the moment, "Dead to Me" is a few pegs down from the top of its internal ratings from "Avatar: The Last Airbender," the service's top-rated title. As is the case with the popularity of "Dead to Me," the high-demand for "Avatar" can be explained by a couple of concrete factors.

Netflix announced its intent to produce a live-action version of the series back in 2018, for one thing, which was seen as a smart business move given the animated series' resounding draw across age demographics despite having originally aired on Nickelodeon. Devoted fans place its serialized story in the same realm as other genre titles turned pop culture phenomena, like the movie versions of "Lord of the Rings" and even various "Star Wars"-related sagas.

And like those widely celebrated titles, the perennial appeal of "Avatar" rests in the way it presents good and evil as epic struggles uniting different peoples, species, and realms against a highly organized and relentless force of evil. The fictions we embrace at given points of time speak to us for specific reasons, and we tend to we tumble en masse into some of them because they serve as bolstering allegories for the trials through which we may be passing as individuals, or as a culture..

More than a few social media users have pointed out the similarities between the Trump administration and its allies at home and abroad, and the Fire Nation in "Avatar."

But "Dead to Me" protagonists Jen and Judy represent something much more intimate and intensely domestic. As one day blurs into the next and the chores of living transform in endless cycles of tedium, they're our spokesmodels for mating in captivity.

With most of us contending with conflict arising from boredom and limited choices of where we're able to go and what we're able to do, their manic lives and cascading calamities of their own creation provide a fantastic escape into a once-familiar world not long gone. Nobody wants their problems, but at least they're not boring.