Trump moves openly to steal the election: Democrats should impeach him again 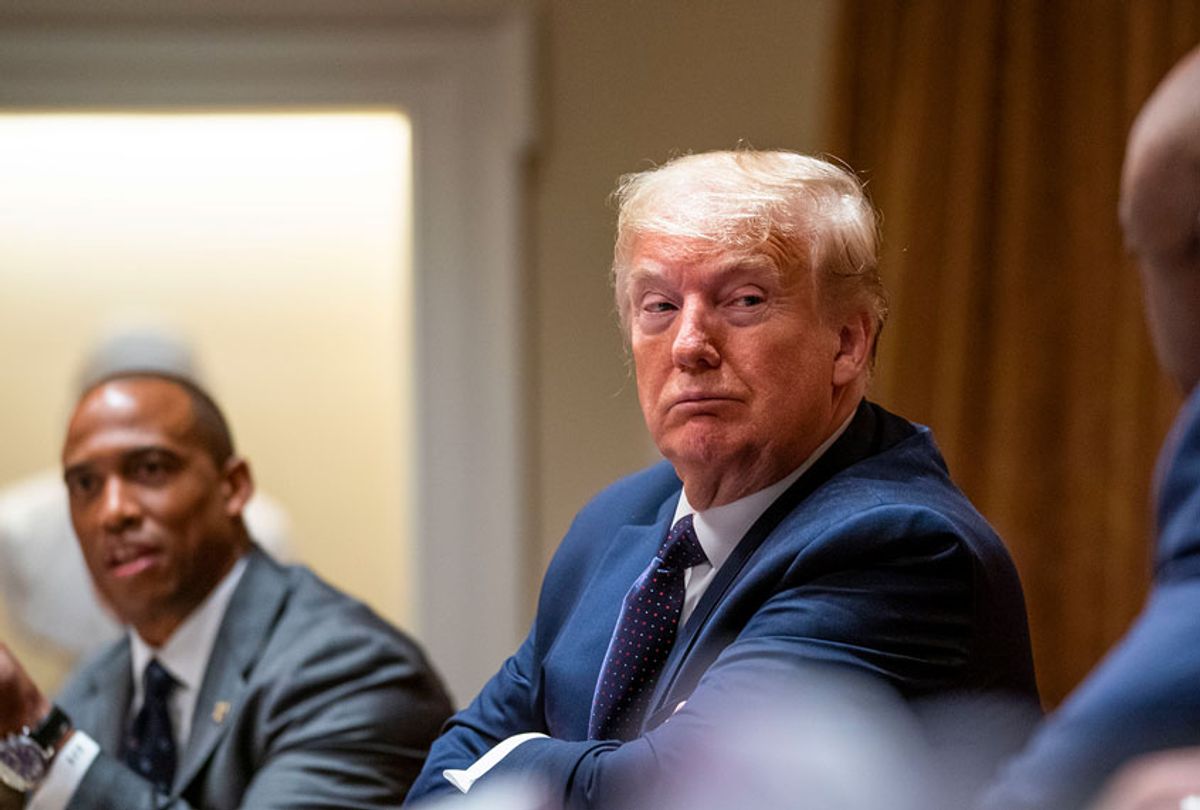 U.S. President Donald Trump listens during a meeting in the Cabinet Room of the White House May 18, 2020 in Washington, DC. (Doug Mills/The New York Times-Pool/Getty Images)
--

Despite his off-the-charts narcissism, Donald Trump knows on some level that the majority of Americans don't want him to be president and he cannot win in a fair election. He didn't beat Hillary Clinton in the popular vote in 2016 — she got nearly 3 million more votes — and only won because of the outsize influence of smaller, rural states in the Electoral College. He has only grown less popular since then and is now well behind former Vice President Joe Biden in most national polls, usually by a margin of 5 to 8 points.

But Trump has had a plan to win in 2020, ever since his re-election campaign kicked off the second he was inaugurated: Cheat like crazy.

Trying to cheat in the presidential election is, of course, what Trump was impeached for in December, which no doubt feels like ancient history, due to the rising death tolls and exploding unemployment rate over which our "very stable genius" of a president has presided since then. So here's a refresher: Trump, anticipating (apparently correctly) that Biden would be his Democratic opponent, leveraged the power of the State Department in an effort to blackmail the Ukrainian president into publicly backing right-wing conspiracy theories about Biden, threatening to withhold military aid unless Ukrainian officials announced "investigations" into Biden. The idea was to create the 2020 version of "Clinton's emails" by using phony investigations and innuendo to paint Biden as corrupt, even though there's no evidence Biden did anything corrupt in his dealings with Ukraine.

Impeachment did a lot to shut down that scheme (though I have no doubt they'll keep trying), but that doesn't mean Trump has given up the hope that he can rig some kind of victory, even in an election when strong majorities of Americans oppose him. Since shamelessness and callousness are among Trump's central qualities, he's perfectly happy to exploit the coronavirus crisis to do it. Yep, that same crisis that he made exponentially worse with his negligence and open hostility to science — now he wants to use it to deprive American voters of their chance to kick him out on his keister in November.

For obvious reasons, a numerous states have decided to dramatically increase the ability of voters to vote by mail in November, especially after the Republican-controlled Wisconsin Supreme Court forced in-person voting in April, leading to a spike in coronavirus cases in the weeks afterwards. No one can assume that the virus won't still be a threat this fall, and it's better to prepare now for the possibility that people won't be able to vote in person in November.

But Trump is certain — and for good reason — that if more people get to vote, he's likely to lose. So he's freaking out. He's particularly sweating the possibility that voters in swing states will be able to vote by mail in large numbers, since he knows his best chance of winning those states lies in making sure that as few people vote as possible.

"Breaking: Michigan sends absentee ballots to 7.7 million people ahead of Primaries and the General Election," Trump tweeted on Wednesday, in typical hyperventilating style. "This was done illegally and without authorization by a rogue Secretary of State. I will ask to hold up funding to Michigan if they want to go down this Voter Fraud path!"

As Jack Holmes of Esquire pointed out, Trump is threatening two U.S. states in exactly the same way he threatened Ukraine: Claiming he will withhold funds authorized by Congress if the recipient doesn't help him cheat in the 2020 election. This is election fraud and blackmail, but this time directed at Americans.

Not only are these tweets an effort to blackmail the states, but they are also a direct effort to scare ordinary citizens out of voting.

As political analyst Judd Legum pointed out in his newsletter, Popular Information, "Telling someone that an absentee ballot application they receive was sent to them 'illegally' could dissuade them from voting."

Indeed, the tweets themselves are arguably voter intimidation, since Trump is literally trying to scare people into thinking they may be prosecuted if they fill out an application for a mail-in ballot. Voter intimidation is a federal criminal offense that could lead to jail time — except that Trump is hiding behind "executive privilege," which has been used to argue against legal punishment for all his criminal behavior.

Pamela Karlan: "What would you think if, when your governor asked the federal government for the disaster assistance that Congress has provided, the President responded, 'I would like you to do us a favor.' I'll... send the disaster relief once you brand my opponent a criminal." pic.twitter.com/J96FY30k3y

Well, the day is here and Trump isn't even being coy about it, but belligerently trying to use the pandemic to scare people into not voting, while threatening Democratic-led states with the loss of federal funding. To justify this, Trump told more lies Wednesday afternoon, claiming that "voting is an honor" (it is in fact a right) and  that "they" mail in "thousands and thousands of fake ballots," an utterly false claim with zero evidence behind it.

What Trump is doing is illegal, and congressional Democrats know it. Sen. Kamala Harris of California noted on MSNBC that, "it is a federal crime to withhold money from states with the purpose of interfering with people's right to vote."

Even threatening to do that is arguably a criminal act, especially if, as noted above, these threats are ameant to scare people out of voting. Either way, it's an abuse of power for the purpose of cheating in an election, which is precisely what Trump was impeached for last December.

I find myself physically exhausted even thinking about it, but it must be said: Democrats must consider the possibility of impeaching Trump again, and soon. What he's doing now isn't just as bad as what he did to Ukraine — it's much worse, since he's directly attacking American citizens and their constitutional right to vote. This is the Ukraine scandal on steroids. (And the Ukraine scandal was Watergate on steroids!)

It's a terrible thing to think about, especially since Senate Republicans, who don't care what crimes Trump commits, would just acquit Trump again. And it's hard to imagine what another round of impeachment hearings, much less another impeachment vote, would look like in the age of the coronavirus.

Still, we know one thing about the first impeachment: It worked. It blew up Trump's scheme to blackmail the Ukrainian president, and exposed the fraudulent nature of the conspiracy theory against Biden so thoroughly that the even Trump-curious reporters like Ken Vogel at the New York Times have been scared away from pretending there's anything serious to these conspiracy theories about Biden.

More important still, Trump has made no secret of his desire to cheat. He does it right out in the open, on Twitter, and will only continue to escalate these threats if there are no real consequences. A second impeachment, ugly as it will be, may be the only way to ensure a free and fair election during this pandemic.