Republican corruption and carelessness led to devastation in Michigan: Does Trump care?

What happened in Michigan this week was no "mistake." Infrastructure was privatized for profit, and it's crumbling 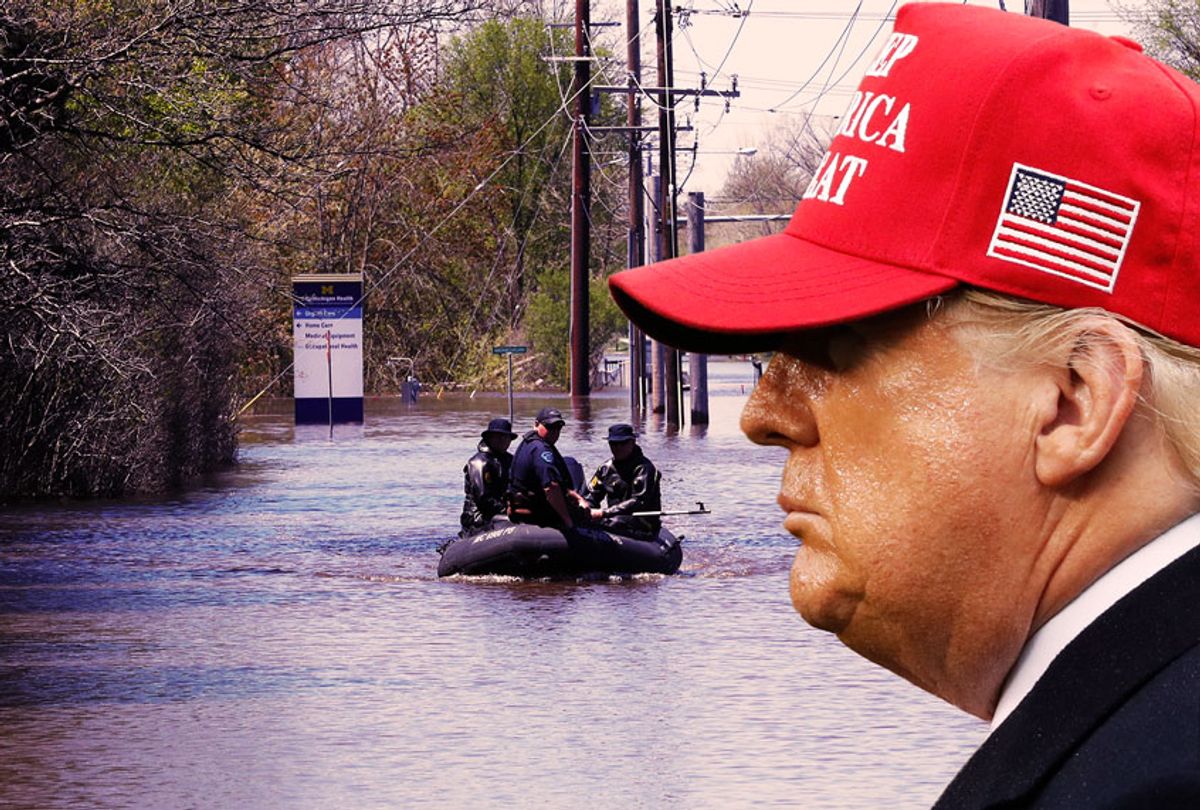 President Trump spent another week feuding with a Democratic governor, this time as Michigan Gov. Gretchen Whitmer dealt with historic levels of rainfall which led to the collapse of a pair of privately-owned dams in the state. Instead of momentarily pausing his politics of petty revenge, Trump made matters worse, as is his wont.

The president diverted already strained resources for a campaign stop in Michigan that doubled as a political stunt, advertising his personal refusal to wear a mask, even in settings where everyone else is required to. Trump's antagonistic rhetoric towards a state that is facing multiple life-or-death crises at the same time was widely criticized. But what he did more quietly this week reveals just how vulnerable his deregulatory actions have left America.

In a move strikingly reminiscent of the Ukraine scandal, Trump took to Twitter on Wednesday to threaten to withhold federal funding from Michigan, even as floodwaters from the two breached dams forced thousands of residents of the city of Midland to flee their homes. Trump's apparent goal was to coerce Michigan officials not to send vote-by-mail applications to the state's 7.7 million registered voters. As usual, the president was unclear about exactly what funding he had in mind. Hours later he sent another tweet claiming that his administration had already activated military and Federal Emergency Management Agency (FEMA) response teams but said Gov. Whitmer "must now 'set you free' to help." Whitmer said at a news briefing on Tuesday that she had already contacted federal officials for help and activated the National Guard. Once again, nobody really knows what Trump was talking about.

Nevertheless, the salient point here is that the president of the United States, after witnessing the flooding of an entire region amid a major public health crisis, was to suggest, in public, that the government and people of Michigan owed him something in exchange for federal aid. Trump then traveled to a Ford plant in Michigan on Thursday and offered this explanation for the failure of the privately-owned dams: "Perhaps there was a mistake."

Like many disasters, the beginnings of the Michigan dam failures are far removed in time from the actual event, so this event can hardly be described as a mistake. All indications are that this week's historic flooding was caused by years of neglect and mismanagement of a public good that was co-opted for private profit. It doesn't help that the headquarters of Dow Chemical, including a Superfund site with known cancer-causing chemicals, is directly downstream of all this floodwater.

The owner of the breached dams, Lee Mueller, who heads a company called Boyce Hydro, has been cited numerous times in recent years. Federal regulators had even revoked one of the company's four dam operating licenses in 2018 over an inability to handle a major flood. At least two of Boyce Hydro's dams were identified as being "high hazard," meaning that according to the National Dam Safety Program and FEMA, loss of life would likely result if they failed or were incorrectly operated.

The potential failure of the Edenville Dam, wrote federal regulators, "would pose a very substantial risk to life and property, and Boyce has repeatedly failed to comply with the orders of the Regional Engineer and other Commission staff or to work with Commission staff to resolve these instances of noncompliance, notwithstanding being given many opportunities to do so." The dam was flagged as unable to handle heavy rainfall back in the 1990s. But Mueller, a Trump supporter who publicly backed the president against impeachment in a Reuters article last year, didn't want to pay to repair them. After years of delay, Boyce Hydro finally agreed to sell the dams to a task force of residents from four neighboring counties who hoped to implement overdue repairs. This is yet another example of the wealthy privatizing their profits and socializing the losses.

The Army Corps of Engineers says more than half of the nation's 91,458 dams are privately owned, and according to E&E News, a majority of them are more than 50 years old. Jokes about Trump's always-impending and never-arriving "Infrastructure Week" have long gone stale, but it's worth remembering that increased infrastructure spending, like the kind needed to upgrade the nation's aging water infrastructure, was one of Trump's biggest campaign promises.

"We have a great plan and we are going to rebuild our infrastructure," Trump said on Fox Business Network in an August 2016 appearance. He further claimed that the amount Hillary Clinton was proposing ($275 billion) was "a fraction of what we're talking about, we need much more money than that to rebuild our infrastructure. Well, I would say at least double her numbers and you're going to really need more than that. We have bridges that are falling down."﻿

After taking office with Republican control of both chambers of Congress, Trump increased his theoretical ask to $1 billion. While Trump did sign a 2018 water infrastructure bill, that legislation, which passed the Senate 99-1, was a bipartisan reauthorization of $6 billion in federal funding for state-level projects that must be renewed every two years. In contrast, Trump signed an executive order rolling back Obama-era environmental standards that required the federal government to account for climate change in infrastructure projects, and also directed agencies to loosen water regulations in California.

Like Trump, the owner of Boyce Hydro tried to blame environmental regulations as the cause of his negligence. The company complained that the state had threatened it with litigation because lower water levels were killing freshwater mussels. "The state agencies clearly care more about mussels living in the impoundment than they do about the people living downstream of the dams," Mueller said in a statement.

But even as some Republicans are reportedly lobbying for Trump to revisit his pledge to invest in infrastructure — pandemic relief funding provides "a once-in-a-lifetime opportunity to give a facelift to the country," Sen. Lindsey Graham, R-S.C., told CNN — the president awarded the largest federal building contract of his entire term in office this week. It was for his border wall. The Washington Post reports that the $1.3 billion deal to build just 42 miles of fencing along the U.S.-Mexico border was awarded to a company that has only one other border contract, and is currently under investigation by the Defense Department inspector general:

The company that won the contract, Fisher Sand and Gravel, has been repeatedly lauded by the president in White House meetings with border officials and military commanders, the result of a long and personalized marketing pitch to Trump and ardent supporters of his barrier project.

After its initial bids for border contracts were passed over, the company and its CEO, Tommy Fisher, cut a direct path to the president by praising him on cable news, donating to his Republican allies and cultivating ties to former Trump adviser Stephen K. Bannon, GOP Senate candidate Kris Kobach and other conservative figures in Trump's orbit.

This is what happens when conservatives decide to utilize an infrastructure budget to subsidize profitable businesses. It rained a lot in Michigan this week, but the private corporation in charge of the dam let this devastating flood happen as a direct result of its neglect and cost-cutting. And that's without considering the downstream effects of the Dow Chemical plant, which is likely to make the danger and death from this flood much worse. Republicans, of course, will pretend to be mystified.