The most populous state was a leader in pandemic management; now, cases are way up. What happened? 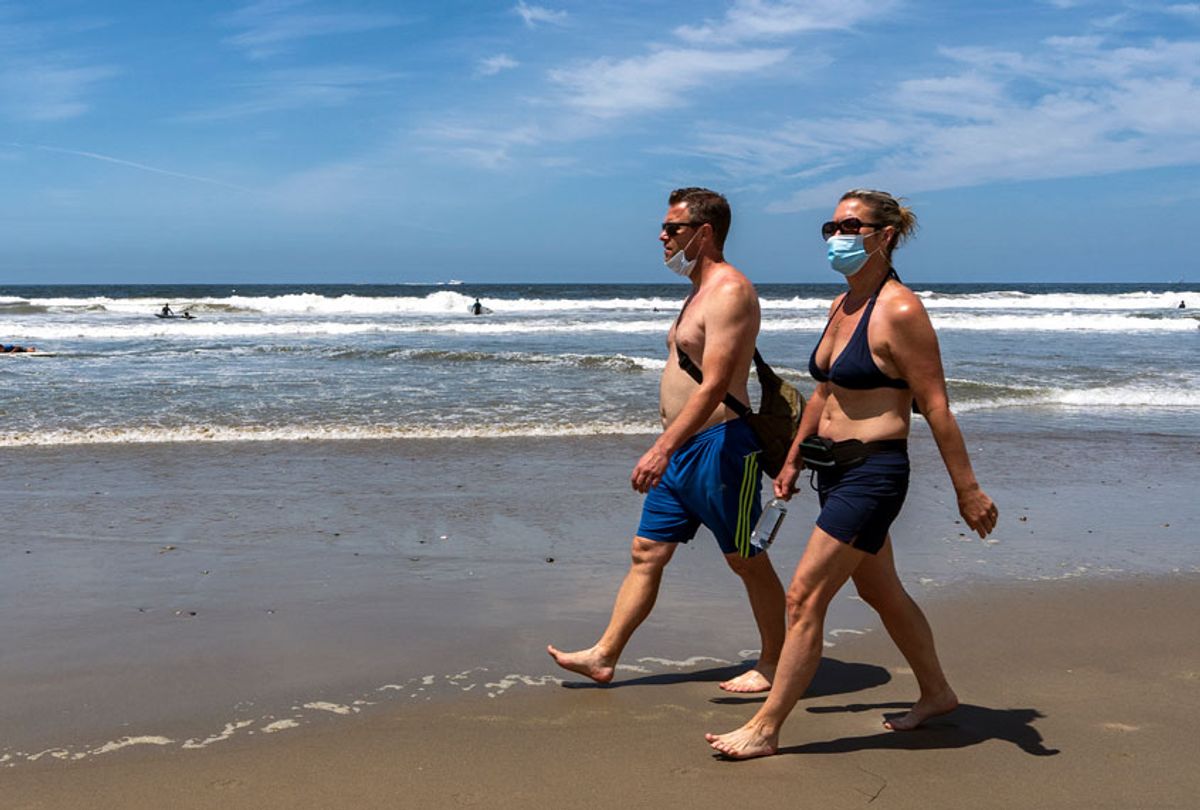 On Memorial Day, as crowds packed Venice Beach in Los Angeles, the state of California experienced its highest one-day total for positive coronavirus cases. According to data compiled by the San Jose Mercury News, there were 2,565 new cases in California on May 25 — breaking the previous one-day record from May 5th, when 2,546 new cases were reported across the state. The number of confirmed cases since the start of the outbreak exceeds 100,000 this week in the state of California, a fact that may seems at odds with Democratic Governor Gavin Newsom's slow plant to start approving reopenings among the state's counties as they meet certain benchmarks.

At the beginning of the pandemic, California — particularly the San Francisco Bay Area — was seen as a leader in flattening the curve, meaning keeping new cases at bay through strict public health measures like business closures and shelter-in-place orders. To achieve this, life came to a screeching halt for millions of San Francisco Bay Area residents as the first stay-at-home orders in the country took effect on March 17, triggering the state and a majority of states across the country to follow suit.

Gov. Newsom has been adamant about following the data and science to direct when and how to reopen the state. Yet the state as a whole is still seeing a steady increase, particularly in the Bay Area and Los Angeles County. Indeed, Los Angeles County, despite seeing its biggest spike to date this week, is moving forward with various activities reopening. Because California is seen as a political and public health leader in the country, the sharp rise in cases is a harbinger for what is likely to happen in other states that follow the Golden State's lead.

Experts previously warned that increased testing in California would yield more positive test results, cautioning freak-outs over the data, but other experts are cautious to attribute that to the most recent rise. Yes, the state of California has ramped up testing, but John Swartzberg, MD, a clinical professor of Infectious Diseases in the Vaccinology Division at UC Berkeley School of Public Health, tells Salon you can't be 100 percent sure what is causing the rise in cases. Swartzberg emphasizes that we need yet more data to develop a baseline, which will be possible thanks to increased testing. What the existing data does infer is that loosening shelter-in-place restrictions was a factor in the recent rise.

"We've dramatically increased our testing, so by that factor you can conclude, 'well it's all a phenomenon of increased testing.' But the reason why I don't think it's a sufficient explanation is because over that same period of time, or even more recently, we have been significantly relaxing what we have been doing in terms of shelter-in-place,"  Swartzberg told Salon in an interview. "And I don't think there's any question that that will lead to an increase, I think everyone will agree that when we see people stop sheltering-in-place we will see more cases."

"What people will argue about is how many and is it worth it," Swartzberg added, noting that reports of people not social distancing and wearing masks could contribute to the rise, too.

Certainly, many citizens are tired of staying home; some are even protesting. Likewise, the economic downturn, and neoliberal policymakers' inability to provide a social safety net to make up for it, has led to significant social pressure to reopen. This week Newsom said barbers and hair salons can reopen in 47 counties (with strict guidelines) and religious gatherings can occur with up to 100 people. Understandably, not all health officials are happy about this.

"The pace at which the state has made these modifications is concerning to me," Santa Clara Public Health Officer Dr. Sara Cody told the county Board of Supervisors.

Recently, there was an outbreak of coronavirus cases at a Morgan Hill fish packing company in Santa Clara County, in which a majority of the infected workers were asymptomatic. The outbreak points to a major flaw in reopening rules, specifically how workers are being told to stay at home if they have symptoms of COVID-19 — though a huge number, perhaps even a majority of those infected, will never display symptoms yet can still spread the virus.

Another possible reason for the rise in cases in California is that the virus wasn't contained early enough in the first place. According to recent estimates from Columbia University disease modelers, about 83 percent of the country's deaths could have been avoided if lockdowns and limited social contact orders began on March 1. Even though the Bay Area's lockdown was early relative to the rest of the United States, that may not have been enough. Even in late February, Bay Area officials were worried they weren't acting fast enough, according to a report by ProPublica.

"We aren't sheltering in place nearly to the extent that we were just even five or six weeks ago ...  we're seeing the consequences of that now," Swartzberg told Salon.

California, which is the nation's most populous state, was among the first to report cases of the novel coronavirus. On March 4, the state reported its first death after the first first possible case of community transmission in the country was reported on February 26. For comparison, New York reported its first community transmission case on March 3 and first death on March 14. The Bay Area went on lockdown in March 17, and the state order occurred on March 19. It's been speculated that this early action, relative to the rest of the country, kept California from reaching a peak like New York. Still, its inability to control the virus now appears to be bad news for the rest of the country.

As Kelsey Piper explains in Vox, California's lack of suppression of the virus, a state Piper describes as being in "limbo," is "jarring" because "California has more resources, more public cooperation, and in many respects better leadership than most states."

"If all those advantages have nonetheless left the state with no real path to reopen, it seems as though most states should expect even worse," Piper writes.

When asked what this means for the rest of the country, Swartzberg said they can see that there can be very few cases when shelter-in-place happens, and restrictions are eased, they are likely to rise. He said the state is still in control of the virus, but he is concerned about the speed in which the state is reopening.

"We are continuing to let people do more things, and that means we're going to have more cases than we're having," Swartzberg said.