"There's zero reason for anyone . . . to walk around with AR-15s and other long rifles in order to go to Subway" 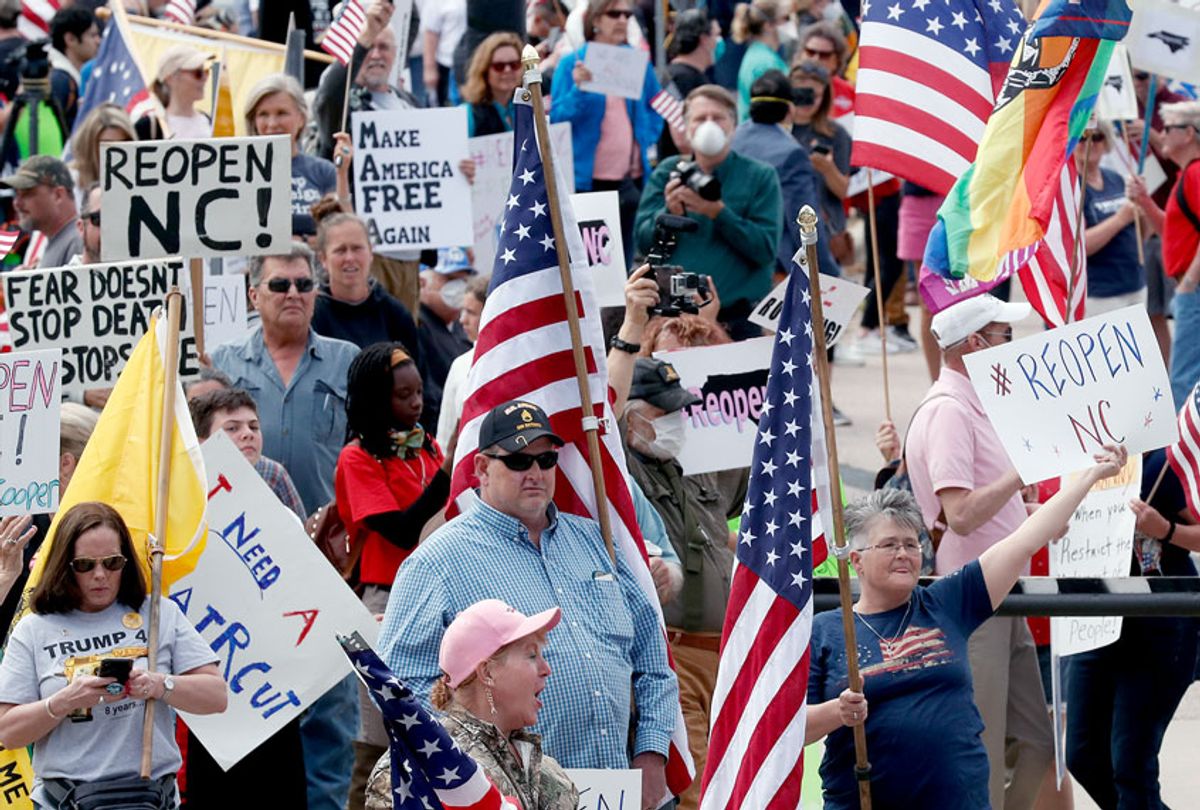 People gather with ReopenNC in Raleigh, N.C., as the group presses Gov. Roy Cooper to allow businesses to reopen during the COVID-19 outbreak. (AP Photo/Gerry Broome)
--

The Raleigh Police Department is investigating a group of armed demonstrators who attended a North Carolina rally protesting the governor's coronavirus restrictions.

The department said in a statement, "While state law does not permit individuals to possess a dangerous weapon when they are participating in or spectating at a protest, there is nothing that prohibits an individual or a group of individuals from walking on a city sidewalk while carrying and displaying firearms."

North Carolina's open-carry laws allow individuals to bear arms on public property, but that does not cover protests.

"Folks are scared," John Pugh, a local business owner told local network WRAL. "There's zero reason for anyone to arrive in downtown Raleigh to walk around with AR-15s and other long rifles in order to go to Subway."

WRAL said the armed group "represents an anti-government movement that feels its First Amendment rights are being violated by business closures and the stay-at-home orders."

One member of the group told the outlet, "We aren't protesting. We are simply exercising our rights and getting fresh air, sunshine and some much-needed bodily exercise."

When asked about the subject of the protest — the governor's restrictions — the individual said, "We definitely shouldn't have put business owners on the verge of bankruptcy because of a virus."

"They're using that language to skate things and be childish, frankly," Pugh said.

Jonathan Melton, a city council member, said in a statement, "It is not lawful to possess (and therefore openly carry) a firearm while participating in or spectating at a protest or a picket. Therefore, an individual can walk down a sidewalk openly carrying a firearm, so long as the individual is not also a 'demonstrator.'"

A number of shutdown demonstrations across the country have been revealed to be organized and promoted by GOP operatives, donors and special interest groups, including zero-tolerance gun rights activists.

The armed groups have received support from right-wing media personalities, as well as from some nominally mainstream conservatives such as Meghan McCain.

"These are very good people," the president tweeted at Whitmer, "but they are angry."

This was the fifth consecutive week of shutdown protests outside the North Carolina capitol. Democratic Gov. Roy Cooper relaxed restrictions a few days prior for the first phase of his statewide reopening plan, which allowed more businesses to open, such as the downtown Subway where protesters and some of the armed group ordered lunch.

Ashley Smith — the protest organizer and the head of Facebook group ReOpenNC, which demands an immediate and full social and economic reopening — was not satisfied.

"Still means no gyms no movie theaters, no hair salons, no massage therapists, no bars, no restaurants for indoor seating," Smith said in a post to the group's Facebook page. "It's really not that much better than where we were yesterday."

Smith was arrested at the group's April 28 rally for stepping outside the designated protest zone. Another ReOpenNC leader revealed to the Facebook group that she had tested positive for COVID-19 two days earlier.

ReOpenNC was able to corral more than a thousand protesters in its first weeks, thanks in large part to enthusiastic astroturf support from Republican operatives and mega-donors — one of whom offered to pay to bus protesters into the city. However, crowds have steadily dwindled. About 100 people gathered for this week's protest, which increased to about 400 during the group march downtown to the tune of "Eye of the Tiger," the theme song from Rocky III, according to the Raleigh News and Observer.

One person stood out in a Batman suit, bearing a sign that read, "Guns Killed My Parents," a reference to the origin myth of Batman's alter ego, Bruce Wayne, directed at the armed group. Some protesters reportedly disputed the nuances of the depiction of the origin story, but the person in the Batman suit remained silent.

A total of 15,346 people in North Carolina have been infected with COVID-19, and 577 have died, according to the most recent data from the North Carolina Department of Health.

Dr. Anthony Fauci, head of the National Institute for Allergy and Infectious Diseases, warned the nation against reopening too quickly when testifying before to the Senate this week, saying that carelessness could spark "an outbreak that you may not be able to control."