As journalists become the victims of police violence, a long-overdue shift in perspective 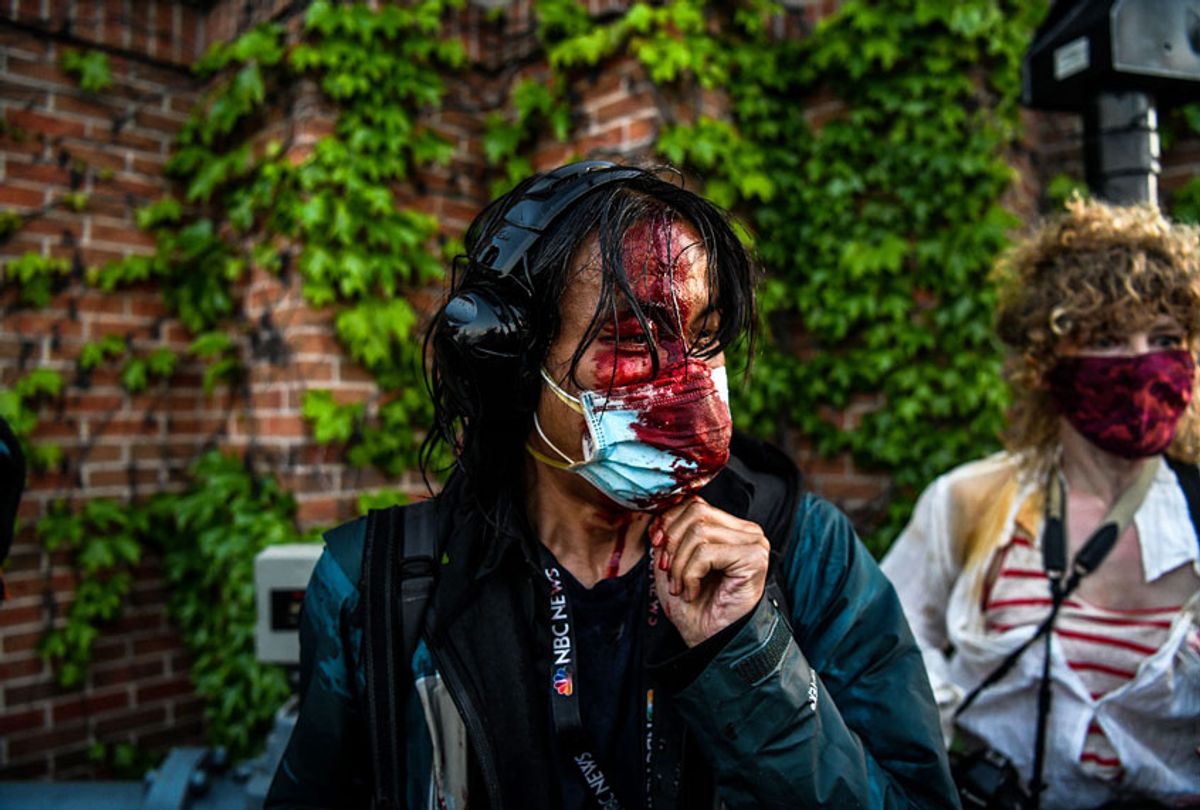 A journalist is seen bleeding after police started firing tear gas and rubber bullets near the fifth police precinct following a demonstration to call for justice for George Floyd on Saturday in Minneapolis. (Chandan Khanna/Getty Images)
--

The targeting, harassment, shooting and arrest of working journalists by police over the last several days is having a significant — maybe even profound — effect on the coverage of the mass demonstrations over the death of George Floyd.

It's a shift from seeing the police primarily as sources and protectors to seeing them as subjects and aggressors.

Exhibit A is the lead story in the New York Times print edition on Monday morning, which, instead of dutifully reporting on the official version of clashes around the nation, boldly addressed the reality that police around the country have been responding to protests against their aggression with yet more of the same, and have themselves been inciting more violence.

The front-page article ran under the headline "Videos From Protests Deepen Scrutiny of Aggressive Police Tactics," and was strikingly illustrated with contrasting photos: one of peaceful protesters, with their hands up; the other of a militaristic police line, swathed in smoke.

Authors Shaila Dewan and Mike Baker — neither of them, notably, from the Times's access-addicted Washington bureau — immediately called attention to the "growing concern that aggressive law enforcement tactics intended to impose order were instead inflaming tensions."

Videos showed police officers in recent nights using batons, tear gas, pepper spray and rubber bullets on protesters, bystanders and journalists, often without warning or seemingly unprovoked. The footage, which has been shared widely online, highlighted the very complaints over police behavior that have drawn protests in at least 75 cities across the United States.

In Salt Lake City, officers in riot gear shoved a man with a cane to the ground.

In Brooklyn, two police S.U.V.s plowed into a crowd of protesters.

In Atlanta, police officers enforcing a curfew stopped two college students in a car, fired Tasers on them and dragged them out of the vehicle.

And in Minneapolis, where there have been six consecutive nights of protests and clashes, a video appeared to show officers yelling at people on their porches to get inside and then firing paint canisters at them. "Light them up," one officer said.

The authors also wrote that shows of force by highly-militarized police weren't bringing calm. "Instead, some people said, it was escalating tensions and serving as a reminder of the regular use of military equipment and tactics by local police forces."

They didn't directly address whether aggressive police tactics like charging crowds have been responsible for peaceful protests becoming violent — something many other observers, including writer Touré, have described.

Nevertheless, it felt like a sea-change for the industry, and especially for the Times, which just a few nights before had been appropriately zinged on Twitter for focusing on the police-procedural aspect of the events rather than on the powerful and widespread outrage that fueled them.

(Ironically, Monday's Washington Post lead story, by Isaac Stanley-Becker, Felicia Sonmez and Katie Mettler, was a soulless mishmash of police reports — so, you know, two steps forward, one step back.)

Along the lines of the Times story, however, an Associated Press article by Jay Reeves and Kat Stafford critically examined police behavior:

As protests grip the nation, officers have doused crowds with pepper spray, struck protesters with batons, steered police cars into throngs, shoved demonstrators and screamed curses. Some police action has been directed against people smashing windows, breaking into stores and burning cars, but many find other instances more difficult to understand — like the elderly man knocked over by police as he walked with a cane on a Salt Lake City sidewalk.

This sentence struck me as both incredibly naïve and, at the same time, nothing short of revolutionary:

Now, some are questioning whether tough police tactics against demonstrators are actually making the violence worse rather than quelling it.

One the one hand, it's more like "Now, the Associated Press is suddenly listening to the people who've been saying that for decades." On the other hand: They are actually listening! Consider this passage:

While the protests and subsequent police interactions may be shocking to some, many African Americans aren't surprised because they've endured police brutality for decades, said Chris White, director of the Detroit Coalition Against Police Brutality,

"What's happening, it's the way American society has always been," White said.

Slate collected a number of social media clips and very effectively aggregated them under the headline: "Police Erupt in Violence Nationwide."

The police assaults on the press were themselves a big news story over the weekend, garnering headlines in almost every major news outlet. CJR's Jon Allsop provided a terrific summary.

Nick Waters, of the investigative website Bellingcat, tweeted Monday afternoon that he had chronicled 100 incidents where journalists experienced violence from the police during the Floyd protests.

These attacks endanger the free press, are an outrage, and should not be tolerated.

But I'm even more interested in whether these attacks will embolden the free press to tell it like it is. There are a few promising signs.