Psychologists tell Salon what drives protesters, and what drives others to take oppositional stances 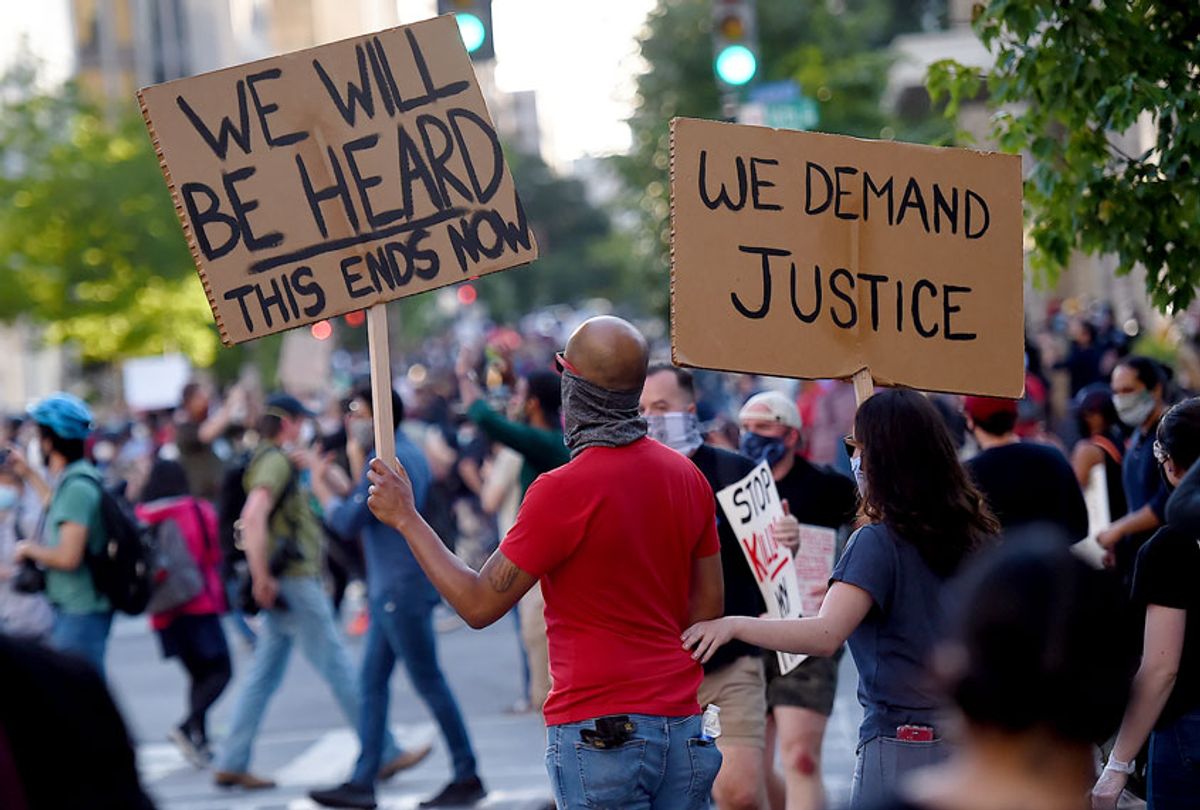 It is hard to imagine that anyone who watched the horrific video of George Floyd being asphyxiated by Minneapolis police officer Derek Chauvin would come away feeling empathy for the police force that stood by and let it happen. And yet, amid the biggest coordinated civil rights protests in the United States since 1968, there are many voices out there who find excuses to defend cops like Derek Chauvin, who is now facing charges of third-degree murder and second-degree manslaughter.

You know the types. Some, like Charlie Kirk, founder of an astroturf right-wing university club, tilt conservative and believe in unwavering support of authority and the "rule of law" (a slippery concept). Kirk, for one, is fond of using false comparisons and what-aboutism to redirect anger towards cops back onto protesters.

Others oppose racist targeting by law enforcement, but they also don't like how some protests have included rioting and looting; or they oppose law enforcement racism but they think former San Francisco 49ers quarterback Colin Kaepernick should have respected the national anthem; or they oppose law enforcement racism but they also want you to remember that there are some good cops out there. Conservative commentator Ben Shapiro counts among this crowd; his Twitter timeline is an array of nitpicks and grievances towards ancillary culture wars related to these anti–police racism protests, though he seems faintly sympathetic to the root cause.

Of the aggrieved reactionaries whose thought processes fall into these ideological categories, many are beyond reason and empathy. For those who are not, I reached out to three experts to explain the psychology behind the protests — and behind the people who either can't or won't understand the protests. By email I spoke to Dr. Cheryl N. Grills, a clinical psychologist at Loyola Marymount University, and Dr. Daniel Gillion, a political science professor at the University of Pennsylvania and author of the "The Loud Minority: Why Protests Matter in American Democracy." I also spoke by phone with Dr. Omar Wasow, an assistant professor of politics at Princeton University.

"Life in the US for African Americans can be characterized as one of incredible resilience marked by the ability to 'make way out of no way' and withstand unrelenting assaults against our humanity," Grills told Salon when asked about the psychological motivations behind the protests themselves. "At some point, though, it can be so traumatic that the oppressive weight of racism and injustice exceeds the ability to cope in ways that are deemed 'acceptable' by society. What we are witnessing is one violation too many of the social contract with America—a contract that says liberty and justice for all includes us."

"The murder of Mr. George Floyd was the proverbial 'straw that broke the camel's back,' the match lit near the powder keg of 400 years of injustice not just by the police but in every single aspect of American life," Grills continued.

There is no arguing against the facts that Grills cited in her response. People of color are killed at a higher rate by police officers than whites (30 per million for African Americans and 22 per million among Hispanics versus 12 per million among whites). In 2019 African Americans comprised the victims in 24 percent of all police killings even though just 13 percent of the US population is black. Moreover, 99 percent of police officers involved in killings had no criminal charges pressed against them.

These statistics are sobering, but when you aren't part of a community that directly experiences this — that is more likely to be pulled over by cops when you've done nothing wrong, or to be stopped and frisked, or to be otherwise treated like a criminal and humiliated or made to fear for your freedom or life — it is difficult to grasp the anger behind them.

"Part of the framing on my heart right now is that America is being forced to feel what people of color feel 24/7/365 and it is painful," Grills explained, adding that empathy among leaders was key. "If we could just get the president, pundits and media to seize the moment to deepen our understanding and healing," she added. "Yes, innocent people are suffering in the recent turn of events, and society is quick to judge and insisting there be an immediate response. Now those with the luxury to be unaffected or mildly affected by racism are brought into the fray and the insistence of justice is invoked."

Grills expressed regret over the relatively insulated people who were not, or had not, spoken out about injustice towards African Americans. "Where were they when we were suffering and crying out to be seen, heard, and supported?" she asked. "Where was the judgment and action against 400 years of injustice? Deep in their hearts, these are the questions fueling some of the acts of defiance we have been witnessing over the past few days." In other words, the perception that a huge chunk of the population did not care about this plight was driving protests.

That leads to another question: Why do so many people, especially whites like Ben Shapiro or Charlie Kirk, feel the urge to question the protesters methods?

"I do not believe everyone that is pushing back on these protests are lecturing activists, though there are many who are," Gillion told Salon. "Often, these critics struggle to understand the black communities' frustrations." He added that some of this knee-jerk response is explained by the fact that many "see these protests as being isolated incidents, and thus are baffled that one injustice garners such a response."

"The reality is that these protests are not the starting point for pushing us toward racial equality, but rather they are the climax or boiling point of a series of protest actions that took place over the last six years," he added.

He continued: "I should also say, that some critics struggle to understand protestors' frustration when they cannot see the source of the grievance. Colin Kaepernick was largely condemned because America did not acknowledge the validity of his cause — Instead of kneeling, he could have worn a button on his uniform and there would have been individuals who pushed back."

Gillion emphasized that Kaepernick has, recently, become more popular among many of those who previously disparaged him. "Now that many are starting to recognize and acknowledge the racial injustice Kaepernick sought to fight against, taking a knee during the anthem seems almost too passive of an action," he added, noting that "other voices of criticism also come from within the black community. . . . They come from a good place and should eventually be heeded by activists. However, this generation must also find their way and blaze their own path to racial progress as they see fit."

Wasow, who specializes in studying the civil rights movements of the 1960s and 1970s, told Salon that the modern protesters are following the same pattern as their historical antecedents.

"One very clear commonality between protests in the 1960s and protests now is the horrible, but nevertheless kind of constant, of police killings as a spark for unrest," Wasow explained. "Another part of what's different would be, we're seeing the presence of cell phones is transformative in a number of ways. . . . It means that also the entire set of interactions in a demonstration between police and protestors is being recorded. We have video of every interaction between police and protestors. And that means that when there's police violence in the context of a demonstration, that can be amplified in social media, when everybody has their own unique social media feed."

He added, "In the 1960s there were three TV news networks, and it was sort of more of a national narrative that could be generated. Whereas now I think it's likely to be more splintered."