After weeks of pressure from advocacy groups and politicians, the VA agreed to take down the offensive headstones 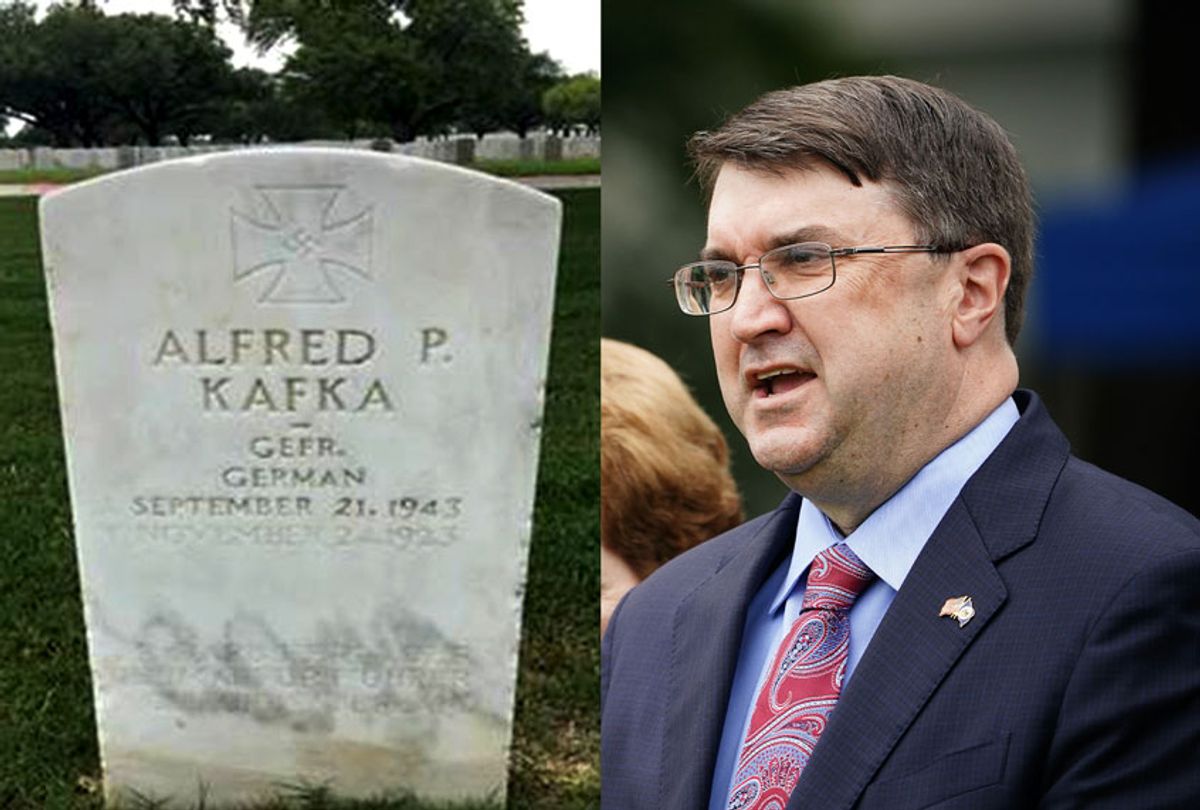 After resisting calls from Congress and religious freedom activists, Veterans Affairs (VA) Secretary Robert Wilkie has agreed to take down three headstones engraved with swastikas at the graves of German prisoners of war in national cemeteries in San Antonio and Utah, Salon has learned.

"The U.S. Department of Veterans Affairs (VA) announced today that it will initiate the process required by law to replace three German prisoner of war headstones in national cemeteries in Texas and Utah," the department said in a Monday statement.

"The headstones are controversial, because they bear swastikas and other symbols and texts related to the Nazi regime that millions of Americans fought during World War II," the statement added.

Because the headstones are afforded certain protections by the National Historic Preservation Act, the VA cannot unilaterally remove or alter them. But later this month, the department will take requisite steps to replace the stones with "historically accurate markers that do not include the Nazi swastika and German text," the statement said.

Wilkie, who once held a membership in the Sons of Confederate Veterans, testified to the House Military Construction-VA Appropriations subcommittee last week that he would prefer to let the stones remain in the cemeteries under his jurisdiction, albeit reframed in proper "historical context."

"Americans must always remember the horror of the Nazi regime and why so many Americans sacrificed so much to free the world from its reign of terror," Wilkie said in the statement. "It is understandably upsetting to our Veterans and their families to see Nazi inscriptions near those who gave their lives for this nation. That's why VA will initiate the process required to replace these POW headstones."

In last week's testimony, Wilkie said that "erasing these headstones removes them from memory. And as we continue to study the Holocaust, the last thing any Holocaust scholar wants to do is erase that memory."

Wilkie was called to testify after a military religious freedom watchdog demanded that the VA remove two headstones bearing a swastika and a phrase honoring Adolf Hitler from the prisoner-of-war "Section Z" in Fort Sam, first reported nationally by Salon.

Weinstein also called on Wilkie to "sincerely apologize in good faith to all United States veterans and their families."

German law bars the public display of swastikas, and all known monuments featuring the Nazi symbol have been removed or replaced.

Though the swastika does not appear on the military's official registry of available emblems of belief for placement on government headstones and markers, VA officials initially claimed that U.S. law prevented their removal.

In an email after Salon's original story, Les A. Melnyk, the head of public affairs and outreach at the National Cemetery Administration, said the Trump administration would "continue to preserve these headstones." The VA also argued that it was obliged to follow international laws guaranteeing enemy combatants burials with full honors.

Following removal, the department will install interpretive signs at all national cemeteries that host graves of enemy prisoners of war "in order to provide historical context about how non-U.S. service members from World War I and World War II were interred and buried on American soil."

The Washington Post reported Wilkie's membership in the Sons of Confederate Veterans ahead of his July 2018 Senate confirmation hearings. Wilkie was confirmed anyway.

Then in 2019, CNN reported that, in violation of Senate rules, Wilkie had failed to disclose ahead of those hearings a speech he gave in 2009 to a chapter of the Sons of Confederate Veterans, as well as a 1995 address in which he praised former Confederate President Jefferson Davis at the U.S. Capitol.

Subcommittee chairwoman Debbie Wasserman Schultz, D-Fla., told Wilkie in last week's hearing that "this is going to be dealt with one way or another." Wilkie argued that would mean he would have to engage in "a very long process" but tried to assure the chairwoman that a compromise could still be reached.

Since Thursday, the nation has erupted in the most violent bout of civil unrest in decades, as protesters from coast to coast demanded justice following the death of George Floyd, an unarmed black man, in Minneapolis police custody.

In May, the Anti-Defamation League reported that 2019 saw more than 2,100 anti-Semitic incidents across the country, an increase of 12% over the previous year. That figure was the largest of any year in the organization's four-decade history.

The VA said it will propose preserving the markers in its National Cemetery Administration History Collection.

The MRFF told Salon that it advocates relocating the headstones to the Holocaust Museum in Washington, so Americans can be informed about how and why the markers came to be displayed in the U.S.