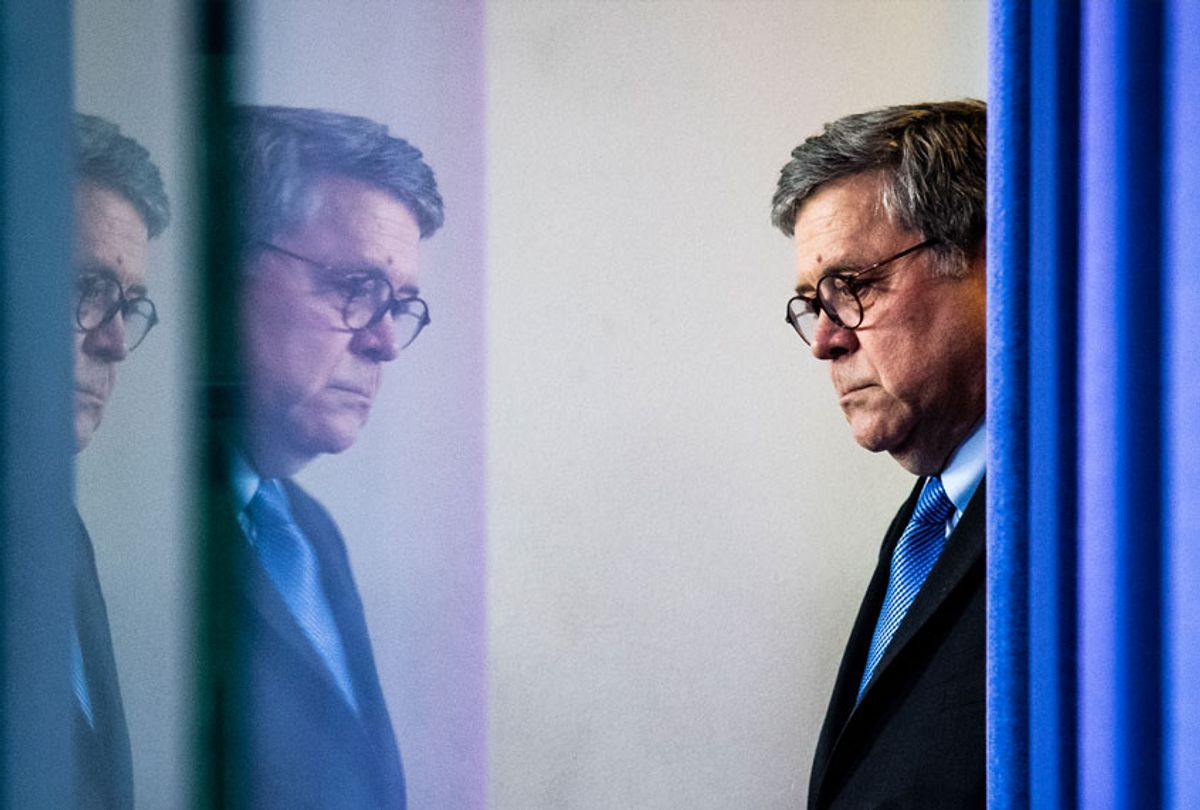 Officials said that Barr and DOJ colleagues initially made the decision to clear a larger area around the White House late on Sunday or in the early hours of Monday. But when the attorney general learned Monday afternoon that the perimeter had not yet been extended, he once again ordered law enforcement to secure the area.

Around 6:35 p.m. — 10 minutes before the president's address in the Rose Garden, and nearly a half-hour ahead of the city's 7 p.m. curfew — law enforcement, backed by the National Guard, unleashed tear gas, rubber bullets and flash-bang shells to clear the way for President Trump to stage his photo op, holding a Bible in front of historic St. John's Episcopal Church.

Trump walked on foot across the street from the White House (reportedly passing graffiti that read, "Fuck Trump") after delivering a speech in which he threatened to deploy the military unless mayors and governors could gain control of unruly protests.

After a long moment with the Bible — held upside down — the president called up several senior administration officials, including Barr, to join him in front of the boarded-up doors of the church, site of a minor fire the previous night.

Trump's publicity stunt was immediately denounced on cable news, as well as by House Speaker Nancy Pelosi, the Mayor Muriel Bowser of Washington and Bishop Mariann Edgar Budde of the Episcopal Diocese of Washington, which oversees St. John's Church.

It was subsequently reported, that Barr had left the White House briefly to tour Lafayette Square just ahead of Trump's speech, and was "surprised" to see that protesters hadn't been dispersed as planned.

ABC News reported that during the visit, a law enforcement official told Barr that some protesters had been seen passing rocks to each other, and that at least one bottle was lobbed in the attorney general's direction.

Barr had reportedly "assumed that any resistance from the protesters of being moved would be met with typical crowd-control measures," an official told the Post, without elaborating on what that assumption specifically entailed.

Barr "basically said: 'This needs to be done. Get it done,'" the official recalled.

A short while later, mounted police attacked protesters in the park. When Trump's speech began at approximately 6:44 p.m., cable news split-screens showed officers firing rubber bullets and what appeared to be tear-gas canisters into crowds in Lafayette Square while the president spoke, with live sound. (The White House and the Trump campaign later denied that tear gas had been used, but both reporters and demonstrators on the scene described a "chemical irritant," whatever its precise definition.)

During the address, Trump declared himself an "ally of all peaceful protesters" before vowing to use the military to "quickly solve the problem" if governors could not quell the unrest over the death of George Floyd currently sweeping the nation.

"This appears to be grossly unjustified use of a chemical weapon on protesters and raises serious human rights concerns under international law," the ACLU posted to Twitter.

"This plan was happening, regardless of any plans of the president," a DOJ official told the Post.

Asked whether Barr, who over the last year has taken criticism for being one of Trump's more forceful footmen, might be shielding Trump from possible legal liability, Matt Miller, former spokesperson for Barack Obama's attorney general Eric Holder, said he believed the attorney general had done this on his own volition.

"I absolutely buy it," Miller said. "Barr has always had a very authoritarian view of the world, and using force on peaceful protesters seems absolutely consistent with it."