The Fox News host has falsely claimed that white supremacy is a "hoax," as well as "an attack on white people" 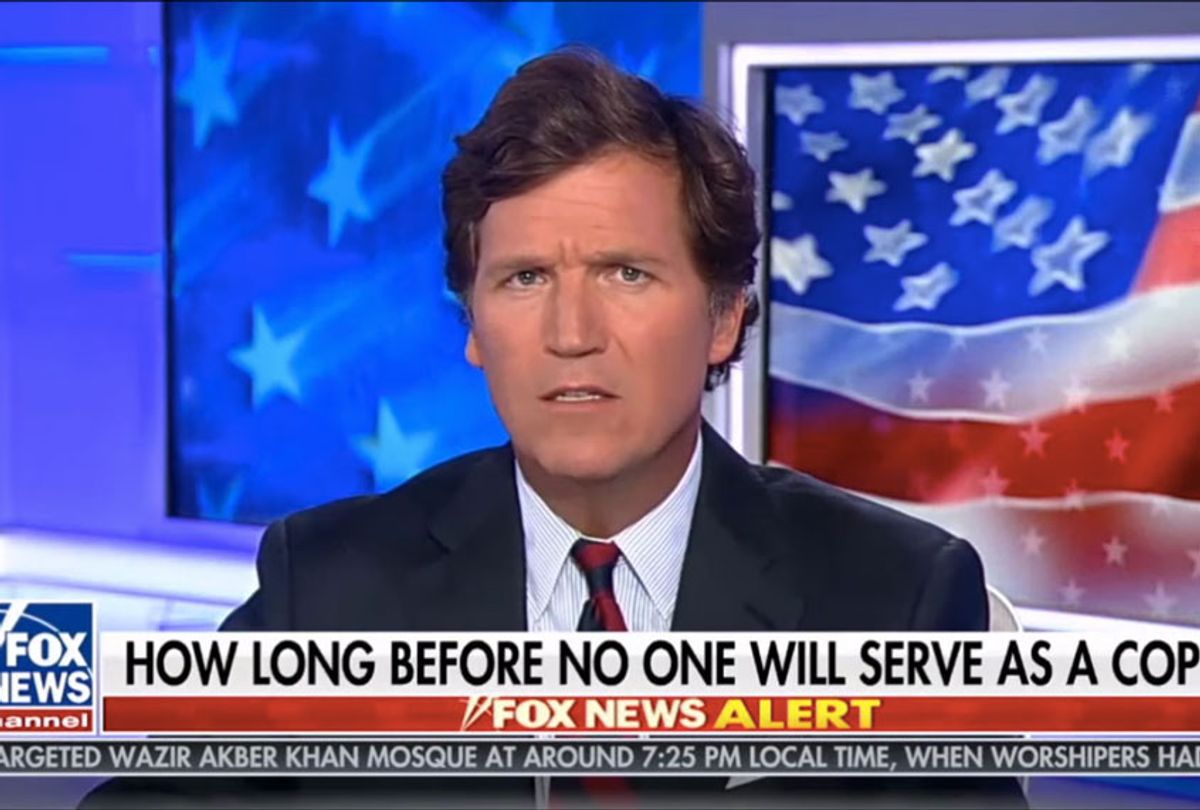 Fox News analyst Brit Hume on Tuesday dismissed a recent speech from Joe Biden, in which the presumptive Democratic nominee pledged to use his first 100 days in office to tackle issues of systemic racism, for espousing "the black grievance politics we've been hearing for decades now."

Hume's comments came during an appearance on the primetime program hosted by Tucker Carlson, his colleague who once called white supremacy a "hoax."

Carlson, who has also called white supremacy "an attack on white people," had just delivered an opening monologue in which he warned his audience that "violent young men with guns" will soon be in charge and "make the rules, including the rules in your neighborhoods."

In a later segment, Carlson would go on to declare that "what you're watching is class war disguised as race war."

But first Carlson turned to Hume for analysis of the politics of a post-protest world. Hume asserted that the Democratic party's response to the civil unrest roiling the country was "out there where the buses don't run."

"We certainly don't have the Democratic Party we used to know and moved ever farther to the left," Hume, who previously refused to agree that President Donald Trump's directive to four women of color in Congress to "go back" to their supposed countries of origin were racist, said.

"Now it is truly out there where the buses don't run with prominent Democratic Party spokespeople saying the things they are saying, siding as they clearly have with the protesters — even if they're violent and looting," Hume continued.

"Joe Biden's speech today was a perfect example," he added. "He had about two sentences or so in that speech of some length in which he expressed disapproval of the violence. All the rest of it was the same black grievance politics we've been hearing for decades now."

In that speech, delivered Tuesday at Philadelphia's City Hall, Biden called on Congress to set across-the-board standards governing the use of force after unarmed black man George Floyd died in the custody of Minneapolis police.

"Trump has turned this country into a battlefield riven by old resentments and fresh fears," Biden said in the speech, which he opened by repeating Floyd's last words: "I can't breathe."

"We cannot let our rage consume us," the presidential hopeful added.

"There was a little girl in California who was part of the second class to integrate her public schools, and she was bused to school every day and that little girl was me," Harris, now a contender to be Biden's running mate, said at the time.

"I will tell you that on this subject, it cannot be an intellectual debate among Democrats," she continued. "We have to take it seriously. We have to act swiftly."

Hume also claimed that Biden's speech, which focused on the explosive national response to a documented history of police brutality, had ignored centuries of struggles by black Americans.

"You would never know, listening to Biden speak . . . [that] civil rights legislation — you would never know that it passed, that countless blacks moved into the middle-class . . . that racial progress has been extraordinary in this country," Hume said.

Hume also asked, "Has any country on earth, Tucker, tried to right the racial wrongs as this country has? If it has, I would like to know which it is, because I don't know that is the case."

"We have fought a Civil War — unbelievable bloodshed — and lives given to slavery. People have shed blood since then," he said. "We have tried very hard as a nation."

Earlier that day, Biden said that "we are all called to love one another as we love ourselves."

"It's really hard work, but it's the work of America," he added.