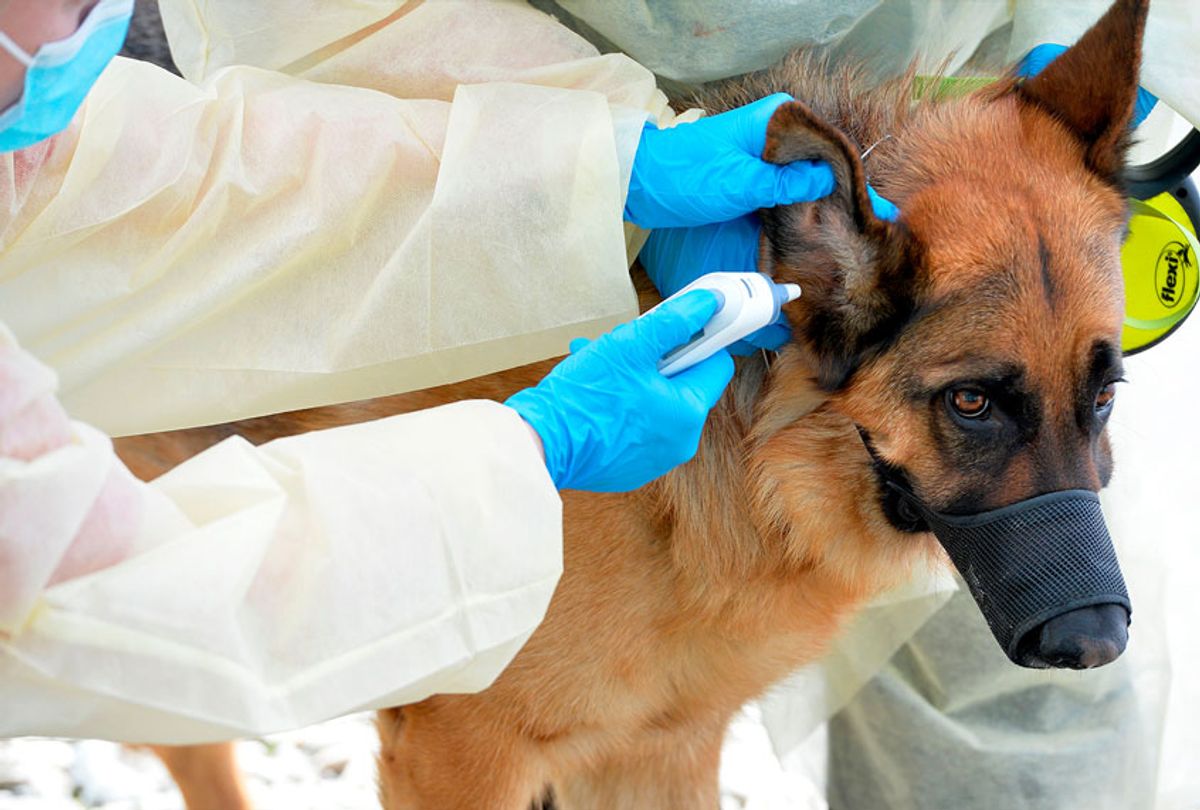 Veterinarian performs a check up on a German Shepard, during a drive through veterinarian clinic (JOSEPH PREZIOSO/AFP via Getty Images)
--

The United States Department of Agriculture (USDA) announced Tuesday that a German Shepherd in New York state is officially the first American dog to have a confirmed coronavirus infection.

The USDA's National Veterinary Services Laboratories (NVSL) said that the dog was owned by one person who tested positive for COVID-19 and another who displayed symptoms consistent with the disease. After the dog began to apparently develop a respiratory illness, the owners took it in to be tested, where it tested positive for SARS-CoV-2. A second dog in the household, while not showing symptoms of the disease, has developed antibodies, suggesting that it was exposed to it.

Although a small number of animals have been confirmed to have coronavirus infections, currently the American government is not calling for animals to be tested. That said, the Department of Agriculture noted that there is reason to believe people with COVID-19 can spread the virus to animals if they engage in close contact with them. As a result, it is recommended that people who have been diagnosed should avoid physical contact with their pets and other animals.

"We are still learning about SARS-CoV-2 in animals, but there is currently no evidence that animals play a significant role in spreading the virus," the USDA explained in its press release. "Based on the limited information available, the risk of animals spreading the virus to people is considered to be low. There is no justification in taking measures against companion animals that may compromise their welfare."

Public health authorities initially believed that a pug named Winston was the first dog to have contracted the coronavirus in this country, but the USDA later revealed that he did not in fact have the virus. Three of the pug's family members — Dr. Heather McLean, Sam McLean and their son — tested positive for COVID-19 in March, prompting Dr. Heather McLean's colleagues at Duke University to administer tests on all of the members of the household to find ways that the disease can be more effectively treated. Somewhere along the way, Winston the pug was given a false positive as a result.

The first American animal to test positive for SARS-CoV-2 was a tiger in the Bronx Zoo. The tiger, named Nadia, was suffering from a dry cough and loss of appetite, causing her to be tested for the coronavirus. Because other cats at the zoo have also developed dry coughs — including Nadia's sister Azul, two Amur tigers and three African lions — there is a possibility that some of them may have also been infected. There are other studies which suggest that domesticated or feral cats could also have the coronavirus, although there is no evidence that human beings can catch the disease from cats.

In terms of Winston the pug: Dr. John Howe, president of the American Veterinary Medical Association, told The New York Times that Winston may have tested positive because "he licked something or someone with the virus, causing him to test positive. But that did not mean that the virus was in his bloodstream or his respiratory tract, which would have made him infected."