John Boyega spoke out against racism, but Hollywood has punished actors for that in the past

Make no mistake, the "Star Wars" actor is risking his career by speaking out in blunt terms. We love him for it 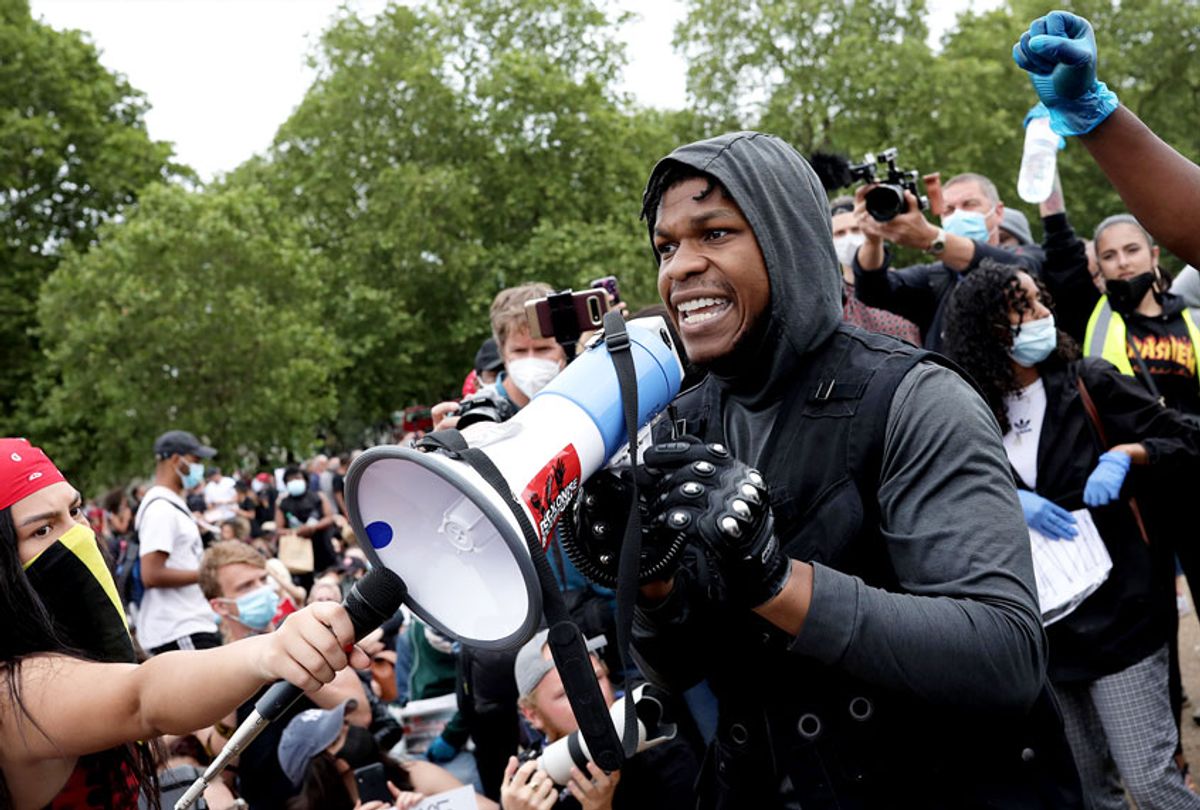 Amidst all of the broadly palatable and PR-vetted corporate and celebrity statements in support of Black Lives Matter, only one Black movie star came straight out and said, "I really f***king hate racists."

John Boyega tweeted this on May 27 in the wake of the initial uprisings over the George Floyd's killing by a Minnesota police officer and tellingly, the fact he point-blank expressed his outrage caused a small controversy. It has been retweeted more than 417,000 times and netted 2.1 million likes. But in case you're under the illusion that this somehow means mainstream culture co-signed Boyega's blunt realness, here's what one respondent had to tell him.

"Hate is a strong word," offered a user who goes by the handle @IfeIfeolarinde, continuing,"We can't conquer hatred with hatred. We rather say we hate their attitude."

To which Boyega replied, "I said what I said. Speak for yourself at all times x."

Boyega's replies went on like this, with people insisting that Boyega soften his language and expressing dismay at the notion that an actor best known for playing Finn – a Resistance freedom fighter in the recent "Star Wars" movies would state something so harshly – and using profanity, no less. Clutch the pearls!

Though Boyega did slightly clarify his stance ("I am talking about WHITE on BLACK racism," he subsequently replied), he refused to soften it for the sake of the children.

"This is my own personal account. I am not here for the kids," he said in one tweet, adding in response to another that has since been deleted, "…I have parents so no need to report to Disney. They are for Buisness [sic]. Thanks x".

From there he doubled down, and doubled down again. He posted a video on Instagram expressing, in no uncertain terms, what any racists who may have been among his fans and followers could do and where they could go. On Tuesday, the British actor joined protesters demonstrating in support of Black Lives Matter in Hyde Park, where he spoke publicly.

"I'm speaking to you from my heart," Boyega adds later. "Look, I don't know if I'm going to have a career after this, but f**k that."

The British actor has never been quiet on the topics of racism and discrimination. Never forget that Boyega was the target of white supremacist hatred from the moment he first removed the helmet of his Stormtrooper costume in the first teaser clips for "Star Wars: The Force Awakens." Racists distorted his face and circulated memes to stoke fanboy backlash, and in the wake of that madness he responded with a simple, "To whom it may concern…Get used to it. :)"

This was before the movies were released, and Boyega was presumably contractually obligated to modulate his public statements as a representative of the franchise. But production has ceased and obviously the world has more pressing concerns than whether a "Star Wars" rebel is offending folks with his language.

None of what Boyega said is wrong or false, or anything countless others haven't said many times over the years and in far more colorful terms. This includes the part about risking his career. Despite the public statements of support from heavy hitter Hollywood directors such as Guillermo Del Toro, Jordan Peele, and "Black Mirror" creator Charlie Brooker, whether Boyega works again isn't up to them. It's up to the studios and media companies who bankroll and distribute their work.

"I would crawl through a barrel of broken glass to have John Boyega even so much as glance at one of my scripts," wrote Brooker, and I don't doubt him. The question is whether Brooker's shredded knees would matter a bit to a top executive with qualms as to whether Boyega's stance on social justice could have a negative impact on box office returns or advertising.

Pointing this out is not a disparagement of Boyega's public stances on Black Lives Matter and his participating in civil rights demonstrations. The fact that his declared enmity of racists is considered controversial speaks poorly of those who hold that view, not of him. Rather appreciate the fact that Boyega, who is still at the very beginning of his film career, is speaking out with zero compunction about how anyone else feels.

Hollywood is notoriously performative concerning social justice issues while privately creating an environment enabling and hiding some of its worst offenses. And it doesn't take much for the powers that be to decide that an artist won't work anymore. The felling of Harvey Weinstein revealed several examples of this, as actresses whose burgeoning careers seemingly vanished overnight came forward with stories of his abuse and threats.

"The burden of the brutalized is not to comfort the bystander," Williams said, adding, "If you have no interest in equal rights for black people, then do not make suggestions to those who do. Sit down!"

Two years later, while interviewing Williams about his role as a producer for "Survivors Guide to Prison," I asked him whether his activism has impacted his acting career.

"It's definitely impacted the things that come to me . . . and what I don't get offered, and people who feel, maybe, that my perspective is too controversial, or risky, or that I'm too well known as 'a Black militant,'" he said. "That has been a quote I heard not too many months ago. So it definitely hurts my career. That's OK. That's certainly not going to stop me from doing anything."

Even now, as media corporations share statements of solidarity with black lives and profess support of civil rights, allegations about discriminatory conduct within those companies are surfacing alongside them.

Recent examples range from anecdotes from, for instance, a former NBC Universal employee saying she was failed by human resources and reprimanded for speaking up about an editor making racist comments about her appearance, to Gabrielle Union's allegation that Paul Telegdy, Chairman of NBC Entertainment, threatened her over speaking out against racism on the set of "America's Got Talent."

Union served as a judge on the show until she and fellow judge Julianne Hough were let go after one season, even though both were under contract to return for a second. Days after her firing became public, reports emerged of the abusive culture on the set, including allegations about racist comments and about contestants, one from guest judge Jay Leno, and aggressive, toxic behavior by series creator and star Simon Cowell.

Union names producers FremantleMedia and Simon Cowell's Syco as well as NBCUniversal in the complaint filed Thursday with California's Department of Fair Employment and Housing.

She's also an entrepreneur and the co-star of the Spectrum series "L.A.'s Finest" alongside Jessica Alba, and has positioned herself to have a stronger hand – perhaps -- than other actors who have gone before her.

Mo'Nique, an Oscar winner who formerly starred in a sitcom and hosted her own talk show for a short time, can't seem to get arrested these days. In a 2015 Hollywood Reporter interview she recounted being told by Lee Daniels, who directed her in 2009's "Precious," that she had been blackballed. Her crime? Allegedly, she's difficult.

Daniels confirms this in a statement added to the piece post-publication:

"Mo'nique is a creative force to be reckoned with. Her demands through 'Precious' were not always in line with the campaign. This soured her relationship with the Hollywood community. I consider her a friend. I have and will always think of her for parts that we can collaborate on. However, the consensus among the creative teams and powers thus far were to go another way with these roles."

In the years following, she went public about being insultingly lowballed by Netflix when they offered her a chance to do a comedy special, which didn't win her many friends, either.

To anyone who wants to point to diva-like behavior as an adequate reason for ending a person's career, let me remind you that Christian Bale went ham on a below-the-line staffer while working on 2009's "Terminator: Salvation," and he's still getting booked. Don't get me started on Mel Gibson.

Ah, but these are white men, the people who get endless passes in Hollywood and, well, Earthly life.

Then again, Boyega's casting in the seventh, eighth and ninth installments of "Star Wars" was championed by executive producer J.J. Abrams, a man who has massive clout in the industry. Boyega also happens to be well-liked (which isn't to say Union and Williams aren't, by the way) and has a massive fanbase. LucasFilm publicly tweeted their support of his activism, linking to his powerful Hyde Park speech.

When the coverage pulls back on these protests and the activism returns to the typical realm of thankless anonymity, it could very well be that Boyega's ferocity in these days costs him anyway.

What's great is that the potential down-the-road impact of his outspokenness doesn't concern him. "You idiots that like to think my millions dictates my mind are the worst," he tweeted. And we'll take this realness over performance every time."