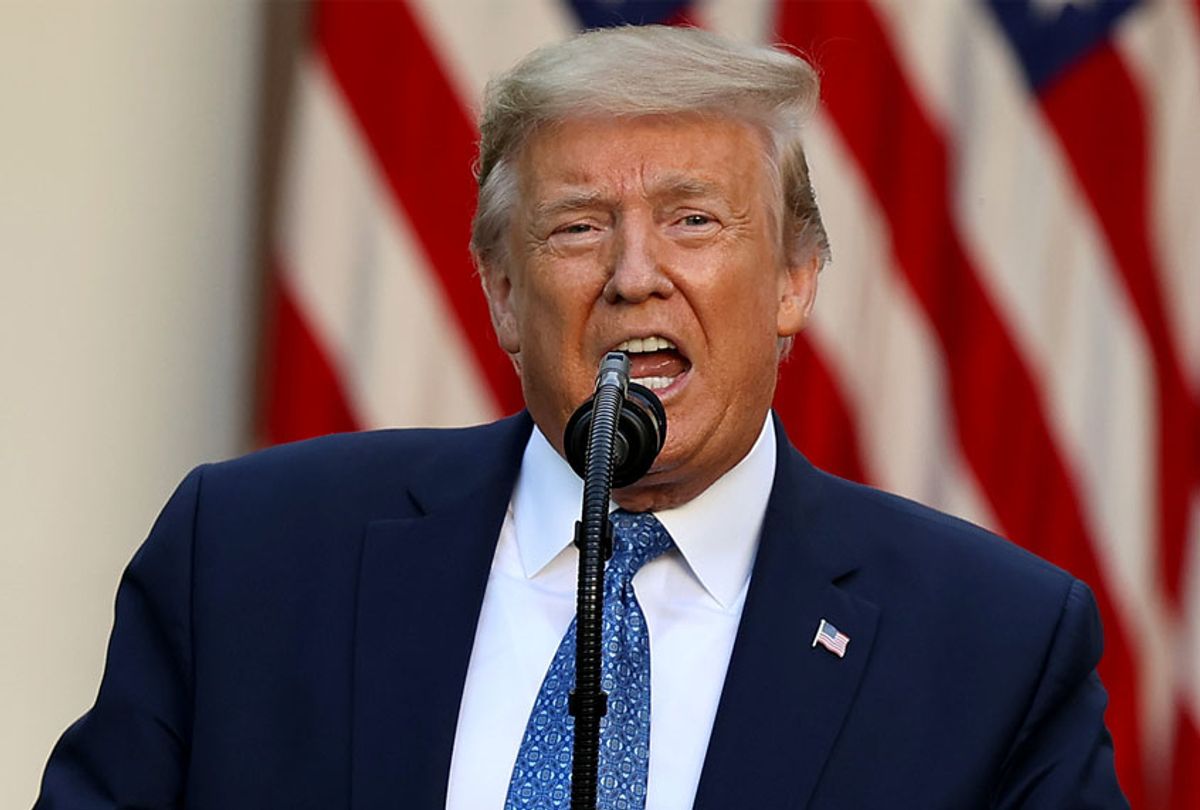 A Yale psychiatrist who has repeatedly sounded the alarm on President Donald Trump's mental health warned that his "displays of false strength" foreshadow his reaction to the November election if he loses.

Dr. Bandy X. Lee is a forensic psychiatrist at Yale School of Medicine, author of the textbook "Violence," and editor of "The Dangerous Case of Donald Trump: 37 Psychiatrists and Mental Health Experts Assess a President." Lee, who heads the World Mental Health Coalition, focuses on public health approaches to violence prevention and has led various think tanks that seek to "draw connections between individual, community, and societal violence, as they are interrelated."

Lee spoke to Salon after Trump's threat this week to deploy the U.S. military onto American streets to quell protests and staged a photo-op in front of a church after federal forces stormed peaceful protesters outside the White House.

"He may not start culture wars, or pandemics, but his psychological structure will occupy them and turn them far deadlier," Lee warned in an interview with Salon.

She also warned about Trump's threats, the president's enablers and what this all means for the upcoming election. Lee stressed that she speaks only for the World Mental Health Coalition, as its president, and not for Yale.

Trump declared himself an ally of peaceful protesters on Monday before federal authorities tear-gassed protesters so he could get a photo-op in front of St. John's Church holding a Bible. What were your takeaways from the cognitive dissonance on display?

Approximately nine months ago, I devised a formula for "translating" Donald Trump's tweets, based on long-term, repeated, real-time testing of theories about his psychology. Part of it was that mere mention indicates a reality that is important to him and one he wishes to suppress by stating the opposite. This is not just cognitive dissonance but serious disorder of psychology: when he says he is "president of law and order," he is actually "telling us" he is president of illegality and chaos.

This means he is no ally of "peaceful protesters" but their enemy, eager to designate them as "professional anarchists, violent mobs, arsonists, looters, criminals, rioters, Antifa, and others" — as he did in the next sentence. First, they are standing up for their rights, and democracy does not exist within a worldview where everyone must be an instrument of his "total authority." Second, police brutality is something he enjoys and encourages, as when he said to a group of police officers, "When you guys put somebody in the car, please don't be too nice." Third, he is obviously itching for an excuse to federalize the military and step in to rescue the day. His followers have been responding to his cues and many police have been gratuitously aggressive, never mind that the protests are against police brutality.

This is how he keeps and expands illegitimate power, stays out of prison and declares himself American Führer — what he actually calls himself does not matter. A member of Congress said the president had declared war on millions of Americans and the First Amendment, and I must agree. As far as I have assessed, he declared war on reality and life itself long ago.

You've previously talked about Trump projecting his own flaws onto others. Was his attack on governors, decrying them as "weak," after he retreated to the White House bunker amid protests an example of that?

Yes. According to reports, he was afraid his retreat to the White House bunker made him look weak, and hence his impulse the next day was to do the opposite. This unstable decision-making is part of what makes him mentally incapable of serving as president, as we outlined in our evaluation of the Mueller report. I have emphasized in my Yale Law School and Yale College classes that the psychology of violence is not courage but the opposite — and violent individuals' accusations are most often "confessions" of their deep-seated fears. When they are most terrified and afraid is when they are at the greatest risk of lashing out — and the president of the United States still commands the most powerful military on the planet and its second-largest nuclear arsenal.

What do Trump's threats to send the military into American streets tell you about where he is, with regard to the protests? Do you think this is another culture-war battle for him, or might he actually defy all modern precedent and follow through?

Civil insurrection gives him the perfect excuse to bring in "his" military, and he is priming the public to accept this nationwide. We need to look out for martial law without declaring it as such, and theft of elections by postponing, canceling or declaring them "rigged." The method does not matter so much as achieving these ends, and mental health professionals understand the power of the mind to do this, especially when disordered and irrational. This is why I have emphasized the need for consultation with psychological experts, through impeachment or anything else. Bringing political or even legal weapons to psychological warfare will be like bringing tanks and canons to combat a cyber attack. They are simply not relevant. What we need is boundary setting, before things get out of hand, against his impulse to push ever greater psychological limits for himself and for the public.

How do we do this, when allies like Sen. Tom Cotton and Fox News host Tucker Carlson want him to get even more aggressive? What does this tell you about the president's supporters?

We know that the psychology of the president and his supporters is not healthy, and it will only continue to attract pathology and to invite destruction. This is why I believe that the American Psychiatric Association, which not only failed in its duty to protect public health but functioned as the government's psychiatric arm to stop independent, conscientious mental health experts from doing so — and was handsomely rewarded in the process — has acted unconscionably. It has done immeasurable damage, much like the Justice Department has done by acting as the president's personal law firm, subverting the law it was supposed to uphold.

How do we counter this? Truth is a great antidote. After Donald Trump had Park Police and the National Guard assault peaceful protesters with tear gas, so he could walk over to St. John's Church and have his photo-op with a Bible, without permission, Episcopal Bishop Mariann Edgar Budde called out his "charade." "The President just used a Bible, the most sacred text of the Judeo-Christian tradition … as a backdrop for a message antithetical to the teachings of Jesus," she said.

To call out his false Christianity, his false patriotism, his caricature-like displays of false strength and ultimately his false mental capacity to be president is to draw the curtain on the Wizard of Oz.

For the past week, Americans have watched constant images of police committing violence against protesters. How does watching wall-to-wall coverage of state-sanctioned violence affect the entire country's psychology moving forward?

We know from successful people's movements that nonviolence is stronger than violence. Speaking up is powerful at times like this. If enough people speak the truth and do not back down, then Donald Trump's spell over his followers will be broken. He has targeted and punished those who do that, as deterrence, but this all the more reveals his Achilles' heel. Since the psychiatric establishment won't do it, the Justice Department won't do it, and the Congress won't do it, conscientious citizens need to ready ourselves for it, psychologically and spiritually, recognizing the moment we are in.